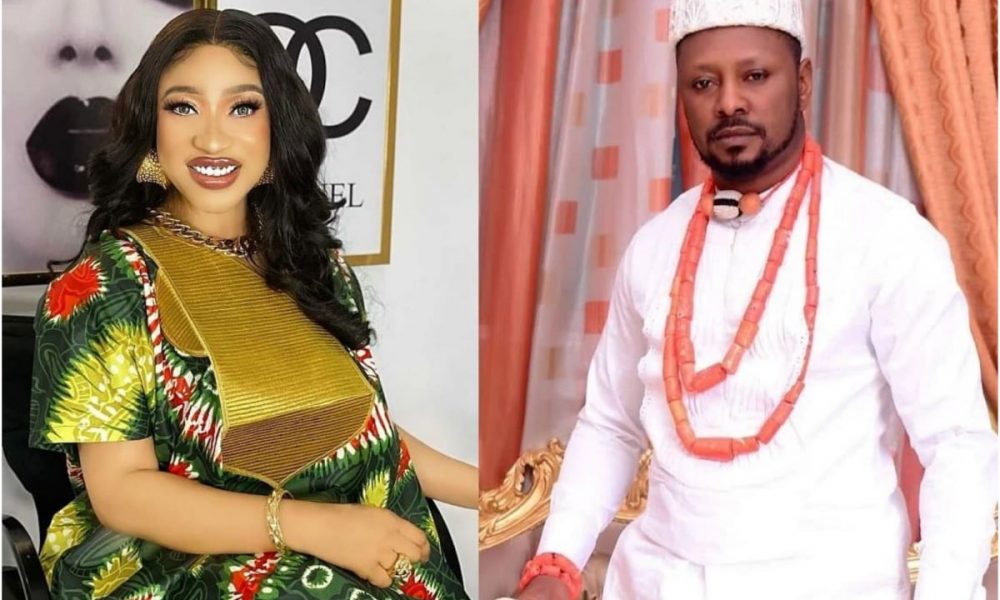 Tonto Dikeh has petitioned the Police alleging attempts by her ex-lover, Prince Joseph Kpokpogri to blackmail her using her nude pictures and some other documents obtained in the course of their three-month affair.

In the petition cited by  GreenWhiteGreen GWG, authored on her behalf from Festus Keyamo Chambers the police was also asked to recover a N2 million loan that is outstanding from an N8 million loan granted Tonto Dikeh to Prince Kpokpogri during their affair. A 2021 Toyota Hilux belonging to Tonto Dikeh is also alleged in the petition to have been confiscated by the former lover and for which the police was asked to help recover.

GreenWhiteGreen GWG reports that Tonto Dikeh and Prince Kpokpogri had a three-month affair during which they showcased one another as the best for the other with Tonto Dikeh gushing him as the husband fitting for her following her rancorous divorce from Olakunle Churchill.

The break-up between Tonto Dikeh and Prince Kpokpogri came in the shadows of allegations of infidelity between both lovers and claims that the actress passionately begged Kpokpogri not to dump her.

However, in the petition against Kpokpogri dated September 6, 2021 and received by the Commissioner of Police, FCT Command, Tonto Dikeh writing through her counsels in Festus Keyamo Chambers, Okechukwu Uju-Azorji, Esq, and Arinze Egbo Esq, submitted:

We are solicitors to Miss Tonto Dikeh, and it is on her instruction that we write this petition to your esteemed office.

We have been briefed as follows:

That sometime in June 2021 one Prince Kpokpogri Joseph started to court our client with a proposal to marry her. In the process, he would invite our client to his residence and sometimes he came over to our client’s residence. Unknown to our client, the said Joseph Kpokpogri (who our client later discovered to be a serial blackmailer) had other motives for courting our client.

Our client now has reason and evidence to believe that Joseph Kpokpogri had planted closed circuit Television Cameras (CCTV cameras) at private areas of his residence, and had stage-managed those visits with the aim of blackmailing her client. She was surprised when sometime in August 2021, the suspect started demanding money from her and threatening to expose nude pictures and other such documents relating to her to actualize his demands. The said Kpokpogri started sending messages, documents, and files containing sensitive information and materials relating to our client to her phone while also releasing some to the public.

Our client believes that some of those information were obtained by wire-tapping her phone and/or through such other means without her authorization.

By reason of the above, we urge you to use your good offices to cause a detailed investigation into the above facts with a view of bringing Joseph Kpokpogri to book.