The crisis rocking the All Progressives Congress (APC) in Oyo State took another dimension on Saturday when two factions of the party organised parallel congresses.

DAILY POST reports that local government congresses of the party were held across the country on Saturday.

It was, however, gathered that two factions of the party held parallel congresses in some parts of Ibadan, the state capital.

The parallel congresses of APC were held in Ibadan North local government area.

Our correspondent gathered that a faction of the party held its congress at Oke Apon in Yemetu area while another faction held their’s at Emmanuel College, Samonda area of Ibadan.

At the end of the Oke Apon congress, Tirimisiyu Saka was elected as the APC Chairman for the local government.

26 other executive members of the party at the local government area were also elected.

The names of the winners of the congress held at Emmanuel College have not been released as at the time of filing this report.

Public Relations Officer of the party in the state, Dr. AbdulAzeez Olatunde confirmed the development to DAILY POST.

Olatunde in a telephone conversation with DAILY POST noted that the issue is a family affair.

He maintained that the crisis would soon be resolved.

Olatunde who spoke with DAILY POST Saturday night said, “There is no other reaction than to say that I am aware. Yes. I am aware.

“It is going to be resolved internally. It is not for public issue.

“We want everybody to express what is in their mind. At the appropriate time, it will be resolved”. 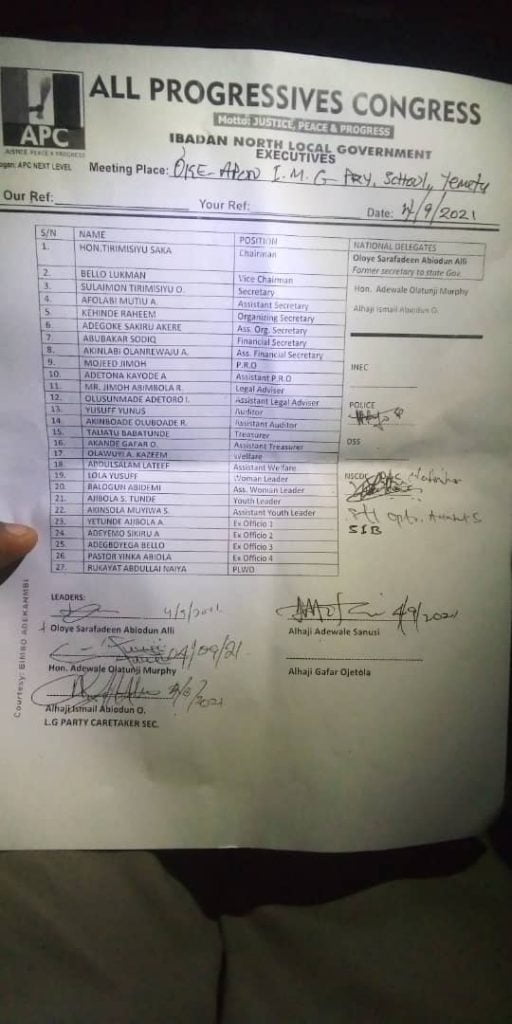 Recall that the two groups had earlier inaugurated parallel ward executives as the battle for the soul of the APC structure in Ogun State heats up.

Saturday’s parallel congresses came up in spite of the warning by the Chairman of the State Congress Committee, Wale Ohu, against the same.

DAILY POST reports that there were no cases of violence during the exercise that witnessed an impressive turnout of APC members across the State.

In Abeokuta South, Gov Abiodun’s loyalists gathered at the Centenary Hall in Ake, as those of Sen. Amosun conducted their congress at the Panseke park.

In Abeokuta North, Amosun’s faction was within the premises of the African Church Grammar School, while Abiodun’s supporters elected their local government officers at Unity High School, Enugada, all in Abeokuta.

Speaking, the congress committee Chairman, Ohu explained that the seven-member committee had a mandate to conduct free, fair and rancour-free congress while commending party faithful for ensuring a peaceful exercise.

He described the exercise as excellent and perfect, saying “there is no parallel congress anywhere in the state.”

There were discordant tunes over the conduct of the Local government congresses by the All Progressives Congress party in Kwara State on Saturday.

Parallel congresses were held despite the threat of heavy sanctions on those who go against the directive of the national secretariat of the party.

He told DAILY POST in a phone chat in Ilorin on Saturday, that the party had no business with breakaway members.

“We have no business with anything called parallel congress, anybody holding parallel local government congresses is doing that for another party, certainly not for the APC.

“There is nothing like that as far as Kwara APC is concerned, I am not aware of any parallel congresses apart from the one I am supervising,” he stated.

However, in a similar phone chat with DAILY POST on Saturday, Iyiola Oyedepo, a chieftain of the faction led by Bashir Omolaja Bolarinwa, a member loyal to the Minister of Information, Lai Mohammed’s group in the state said, “there was a parallel congress in all the 16 local governments.

On the side of Abdullahi Samari, state chairman caretaker committee, the exercise generally took off across the state without any incidence as party delegates trooped out to elect new executives of their choice at the local government level.

New leaders were elected through the affirmation of the consensus list earlier agreed to by all the stakeholders.

The exercise was conducted under a peaceful atmosphere with the supervision of the APC team from the national secretariat Abuja led by Yusuf Omaaki, and INEC officials deployed for the purpose.

Suleiman Tejidini was reportedly unanimously endorsed as the chairman for another term in the Ilorin West Local Government Area of the party.

Efforts to reach the leader of Lai Mohammed’s faction, Bashir Omolaja Bolarinwa, proved abortive, as calls put across to him were not answered.