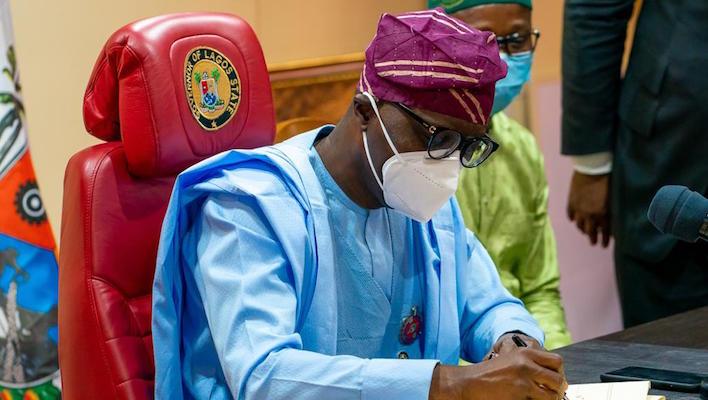 Lagos accounts for about 55 percent of Nigeria’s total VAT revenue.

Governor Sanwo-Olu signed the “bill for a law to impose and charge VAT on certain goods and services” at about 11.45 am on Friday, September 10, after returning from an official trip to Abuja.

The Lagos State House of Assembly on Thursday passed the State Value Added Tax (VAT) bill and the Bill on Prohibition of Open Cattle Grazing in the state.

Speaker, Mudashiru Obasa, had immediately directed the acting clerk of the House, Olalekan Onafeko, to transmit a clean copy to Governor Sanwo-Olu for assent.

The two bills were passed after unanimous votes by the lawmakers at the sitting where they were read the third time.

Speaker Obasa had commended his colleagues for their passion to see that the state continues to grow. Recall that the House held separate public hearings on the bills on Wednesday with stakeholders expressing support.

The House had on Monday read for the second time the bill on open grazing and the value-added Tax bill.

Obasa had described the ‘Prohibition of Open Cattle Grazing Bill’ as timely and one that would ensure harmonious relationships between herders and farmers and protect the environment of the state and the southwest zone.

He also suggested that the bill should make provision for the registration of herders and prepare them for ranching.

“Allocating parcel of land is not enough but there should be the training of those who would go into ranching, ranching is expensive and required adequate preparation,” he had said.

Obasa said it would lead to increase in revenue and increase in infrastructure development in Lagos.

“This is in line with fiscal federalism that we have been talking about,”Obasa said.