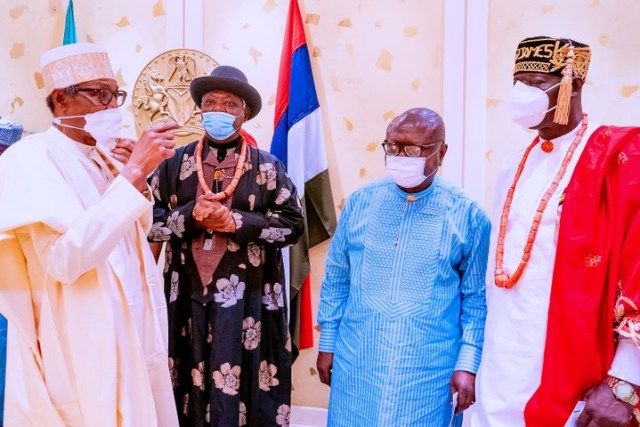 TheNewsGuru.com, TNG reports that while receiving the leadership of the INC at the State House in Abuja on June 24, President Buhari had said that the NDDC Board would be inaugurated as soon as the forensic audit report was submitted and accepted.

The president said: ‘‘Based on the mismanagement that had previously bedeviled the NDDC, a forensic audit was set up and the result is expected by the end of July, 2021. I want to assure you that as soon as the forensic audit report is submitted and accepted, the NDDC Board will be inaugurated.

The INC President, Professor Benjamin Okaba, in a statement in Yenagoa on Friday, wondered why President Buhari “till date has not said anything about the report and the inauguration of the substantive board.”

The INC frowned on what it described as the “complexities and superfluousity that trailed the said audit process, in addition to the diversionary comments of Mr Malami” which it stated “have left us with more worries and suspicion of the true intentions of the exercise.”

Professor Okaba also expressed concern that President Buhari “till date has not said anything about the report and the inauguration of the substantive board, over two years into the life of his 2nd term despite public concerns and condemnation on the implications of managing the NDDC as a private estate for this long.”

On the forensic audit report, he insisted that there should be transparency in the implementation of the audit report because, “The INC considers it as a huge integrity test and task on Mr President to immediately submit the Forensic report, undiluted to the corridors of public domain with the guarantee of free and easy access by anyone that cares, in line with the Freedom of Information Act.”

The Congress also drew attention to the gaps and seeming inconsistencies noticed in the audit report which was submitted by the Minister of Niger Delta Affairs, Senator Godswill Akpabio to President Buhari. It stated unequivocally that “The ljaw nation is dissatisfied and displeased with the mere mention of figures such as N6trn spent on the NDDC and many others that when weighed and compared with figures from other available benchmarks published earlier by the External auditors and the office of the auditor general, exhibit clear discrepancies and confusion of data. Why de-emphasise the over N1.3trn owed the NDDC by the FGN? Why no mention of the hundreds of billions of naira paid to emergency contractors between Jan 2020 and August 2021 while genuine contractors are still owed several billions of naira? Why the passage of the NDDC budget with a provision of N452.2BN in December 2020 when the NDDC had received only 194bn as at that date?”

The INC also demanded for fairness in the implementation of the report “to allay the fears that The Akpabio orchestrated NDDC Forensic Audit will not turn-out to be another scam or instrument of witch hunting, intimidating and blackmailing perceived enemies and to further short-change the ljaw nation,” and consequently demanded “the immediate publication of the Audit report with highlights on the achievements, strength and weaknesses of the NDDC and recommendations going forward.”

Professor Okaba noted that “the INC frowns at the secrecy with which the outcome of the forensic audit is being handled.”