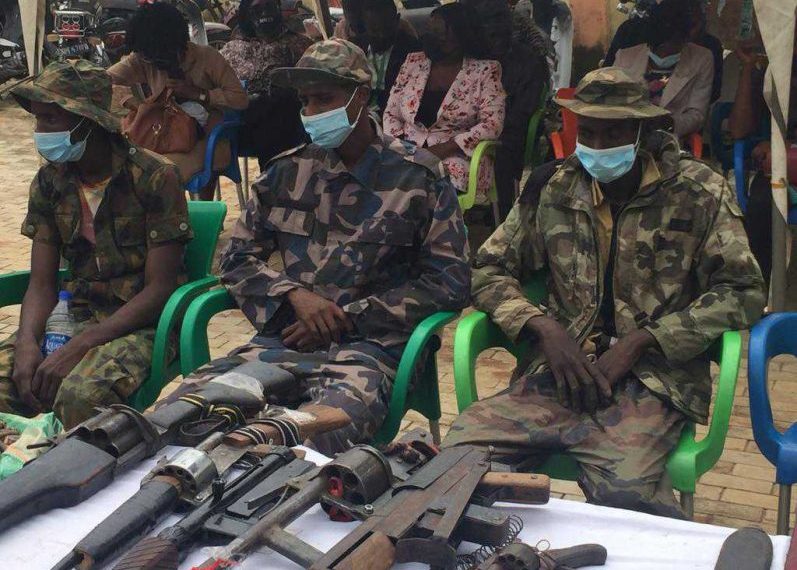 The leader of the kidnapping gang that abducted 136 students of Bethel Baptist High school in Kaduna State identified as Muazu Abubakar has said that he got a share of N100,000 from the ransom paid for the release of the students.

27-year-old Abubakar stated this when he was paraded alongside two other suspects in the widely-reported kidnapping, Adamu Bello and Isiaku Lawal, at the Force Headquarters in Abuja on Thursday.

The trio were paraded alongside 47 suspects arrested for offences ranging from kidnapping, cattle rustling, illegal possession and distribution of illicit drugs to armed robbery.

Force Public Relations Officer (FPRO), CP Frank Mba, assured that the force was making frantic efforts to track down other members of the kidnapping gang.

The three suspects who confessed to the crime told newsmen that 25 of them participated in the abduction of the school students.

The leader of the gang, Abubakar, revealed that their desperation for money pushed them to carry out the abduction.

The FPRO said that the police investigators had established prima facie cases against all the suspects paraded and they would be arraigned before courts after investigations have been concluded.

He said that the operatives of the IGP Special Tactical Squad (STS) arrested all the suspects comprising of 48 males and two females.

The FPRO also paraded another set of suspects led by one 39-year-old Monda Akawo from Nassarawa State whose gang participated in multiple stealing of multimillion Naira church musical instruments.

According to Mba, the suspect would wear a Nigerian Army uniform with the rank of a captain and sit in the gang’s operational vehicle to allow for easy passage of stolen instruments.

The suspect told newsmen that his members have been operating at various churches such as the Mountain of Fire Ministries (MFM) and the Redeemed Christan of God (RCCG) in Nassarawa State and the Federal Capital Territory (FCT), Abuja before they were arrested.

The force spokesman also paraded 35-year-old Joseph Orazulike from Anambra State who resides in Mararaba, Nassarawa State for allegedly buying some of the stolen instruments.

Mba stated that the suspect upon interrogation by the police team confessed to the commission of the crime.

The police paraded two suspected kidnappers, 22-year-old Mubarak Mohammed and 21-year-old Mohammed Bode (a.k.a. Batilube) over the kidnapping of a female student of the Kwara State University (KWASU) who was later rescued by the police.

Mba said Mubarak on his own confessed to having carried out 50 robbery incidents within Kwara, Oyo and other neighbouring states.

CP Mba said that two of the suspects were from Sokoto State while the remaining two were from the Niger Republic and have been selling the hard drugs to kidnappers and bandits in Kaduna, Yobe States amongst others.