The National Leader of the All Progressives Congress, APC, Bola Ahmed Tinubu tested negative for the COVID-19 virus on Monday.

Tinubu and a retinue of his aides had to go for the test following the sudden death of his Chief Security Officer, Lateef Raheem. The Late Raheem tested positive for the virus after NCDC officials took samples from his body before burial. 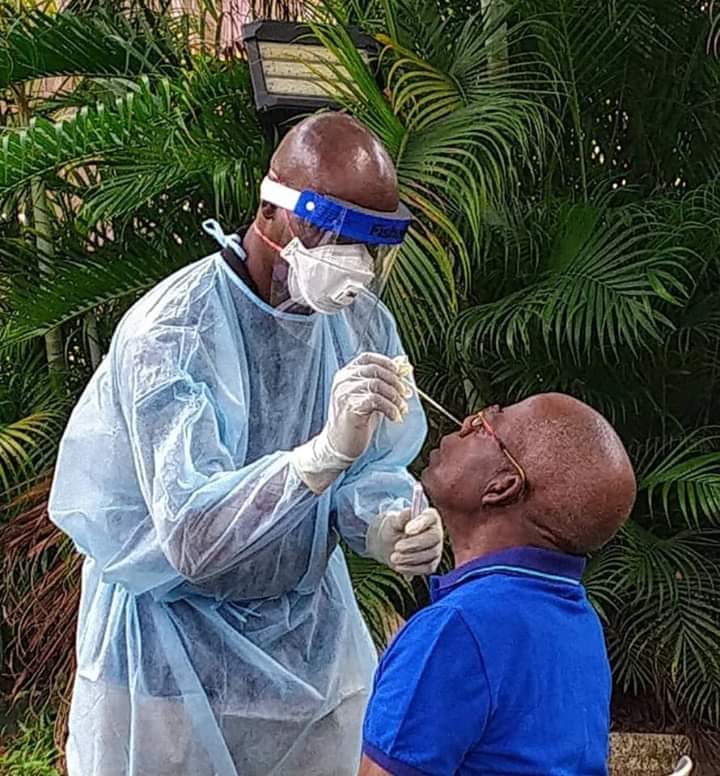 Although news of the Jagaban’s negative status was received with much applause, a section of Nigerians expressed doubt on social media, speculating that there was not enough evidence to prove that the long-time politician did indeed take the test.

However, on Wednesday, POLITICS NIGERIA obtained an image of the former senator relaxing as an NCDC official took samples from him for a test. His wife, Senator Oluremi Tinubu also tested negative for the novel virus.

Many Nigerians are currently trapped in the Caribbean Island of St. Vincent and the Grenadines due to a volcanic eruption. Dr Levi Odoe, the Consul-General of Nigeria on the Island, has appealed for support from the Nigerian government and other public-spirited entities around the world. END_OF_DOCUMENT_TOKEN_TO_BE_REPLACED

International financial expert and Chartered Accountant, Akin Oladeji-Johnbrown has been declared as hero of Covid-19 pandemic by a Canadian City, Mississauga, Ontario. In the letter of award, by the city’s Mayor, Bonnie Crombie, Oladeji-Johnbrown is among the few residents identified to have rendered critical services END_OF_DOCUMENT_TOKEN_TO_BE_REPLACED

Ned Nwoko By Emma Amaize A former member of House of Representatives, Hon Prince Ned Nwoko has expressed fear over escalating insecurity in the country, warning that if uncurbed, it could threaten the existence of the nation with the lives of citizens already endangered. Prince END_OF_DOCUMENT_TOKEN_TO_BE_REPLACED