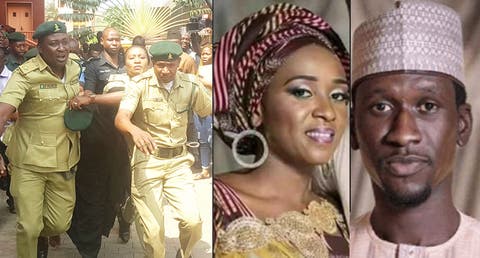 FILE: Warders and policemen shielding Maryam Sanda after her conviction and sentencing for killing her husband by the High Court of the FCT in Abuja…on Monday. Photo: Olatunji Obasa
‌

The Nigeria Correctional Service has dismissed a report that Maryam Sanda had been granted a presidential pardon.

The Service Public Relations Officer, Mr Chuks Njoku, in a statement on Thursday in Abuja described the report as fake news.

“The attention of NCoS has been drawn to the news making the rounds that Maryam Sanda was granted presidential pardon on Thursday, April 9, alongside some 70 other inmates at the Medium Security Custodial Centre, Kuje.

“The Service wants to categorically state that the news is fake and very unrealistic and an attempt to rubbish the good intention of the President towards decongesting the custodial centres.

“The Minister of Interior, Mr Rauf Aregbesola, clearly stated the categories of inmates qualified for the amnesty while addressing a news conference on April 9.

“According to Aregbesola, inmates sentenced for violent extreme offences such as terrorism, kidnapping, armed banditry, rape, human trafficking, culpable homicide and the like are not qualified for the Presidential Pardon.

“However, convicts who are 60 years and above, convicts serving three years and above with less than six months to serve, inmates with ill-health likely to terminate in death are qualified.

Njoku said that Sanda did not meet any of the mentioned requirements and therefore did not benefit from the Presidential pardon and clemency.

“The Controller-General of NCoS, Mr Ja’afaru Ahmed, assures the public that the service will ensure the safety and humane containment of inmates in our custody,” he said.

NAN reports that on January 27, an FCT High Court sentenced Sanda, who stabbed her husband to death, Bilyaminu, son of a former national chairman of the Peoples Democratic Party, Haliru Bello, to death by hanging.

Felix Onajite Delta State governor, Okowa and SSG, Chiedu Ebie Two top officials of the Delta State government have tested positive to coronavirus (COVID-19). The chief press secretary to the governor of the state, Mr Olisa Ifeajika, who made this known in a statement in Asaba on END_OF_DOCUMENT_TOKEN_TO_BE_REPLACED

JOHN ALECHENU and PETER DAVID Ahead of the governorship primary of the All Progressives Congress in Edo State on Monday (tomorrow) the party has dismissed the order gazetted by the state government that political parties must obtain approval of the governor to hold any political gathering. The END_OF_DOCUMENT_TOKEN_TO_BE_REPLACED

The coasts seems clear on Saturday with the clearance of Governor Godwin Obaseki to seek re-election on the platform of his new party, Peoples Democratic Party (PDP). The Hon. Kingsley Chinda-screening committee gave Obaseki a clean bill of health ahead of the PDP primary election END_OF_DOCUMENT_TOKEN_TO_BE_REPLACED

Davidson Iriekpen, Martins Ifijeh in Lagos and Ernest Chinwo in Port Harcourt There may be no respite in sight for Nigerians as far as Coronavirus is concerned if we take what the authorities are saying. Secretary to the Government of the Federation and Chairman, Presidential END_OF_DOCUMENT_TOKEN_TO_BE_REPLACED

Friday Amobi, Port Harcourt These are not the best of times for medical personnel not only in Nigeria but all over the world especially in countries where the global pandemic of Coronavirus is still raging. In some countries they have continued to live in denials END_OF_DOCUMENT_TOKEN_TO_BE_REPLACED