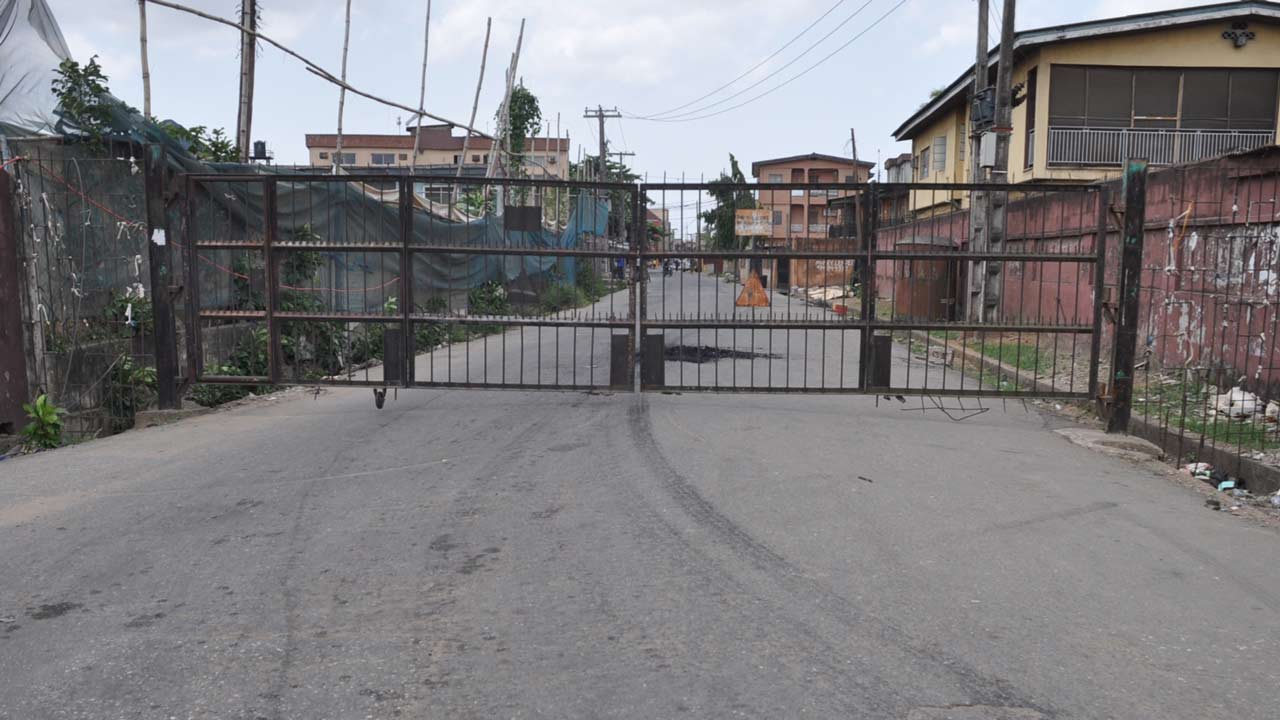 Osifila Street under lock due to the fear of attacks by armed robbers at the Anifowoshe area of Ikeja in Lagos…yesterday. PHOTO: FEMI ADEBESIN-KUTI

The next 14 days could prove whether hungry and frustrated residents in Lagos and Ogun States and the Federal Capital Territory (FCT) would endure the Federal Government’s extension of the COVID-19 lockdown.

In a nationwide broadcast, Buhari said the action became needful “having carefully considered the briefings and report from the Presidential Task Force and the various options offered.”

In a bid to justify the move, he explained: “This is not a joke. It is a matter of life and death. Mosques in Makkah and Madina have been closed. The Pope celebrated Mass on an empty St. Peter’s Square. The famous Notre Dame cathedral in Paris held Easter Mass with less than 10 people. India, Italy and France are in complete lockdown. Other countries are in the process of following suit. We cannot be lax.”

Buhari promised: “In the coming weeks, I want to assure you that the Federal Government, through the Presidential Task Force, will do whatever it takes to support you in this very difficult period. I have also directed that the current social register be expanded from 2.6 million households to 3.6 million households in the next two weeks. This means we will support an additional one million homes with our social investment programmes. A technical committee is working on this and will submit a report to me by the end of this week.”

The first phase of the lockdown in some parts of Lagos and Ogun States had climaxed over the weekend in a near total breakdown of law and order as hoodlums and robbers unleashed terror on residents.

Prior to this, many residents in both states and in the FCT had expressed anger at the non-availability of palliatives. Many others lamented their inability to access basic banking services. While these and other complaints flourished, many security personnel, charged with enforcing the lockdown, found an avenue to make money as the restriction floundered.

Reacting, elder statesman and former governor of Kaduna State, Alhaji Balarabe Musa, said:“I was expecting the government to mention in his broadcast the immediate effort of government to address the problem of hunger and starvation Nigerians are now facing in their various homes since they imposed the lockdown.

“This COVID-19 disease has really exposed the inability of this government to live up to its responsibility. The government is saying that they have provided palliatives for Nigerians. But where are the palliatives? Nigerians are suffering. The government should ensure that it meets the welfare need of the people to ensure that the lives of Nigerians are safeguarded under the current lockdown. Now that the lockdown has been extended, Nigerians have to look for their means of survival if the palliatives are not forthcoming.”

The immediate past President General of Aka Ikenga, Chief GoddyUwazuruike, said: “I don’t think any reasonable person will oppose the extension. But my disappointment is in the lack of effective care for the people. How are people expected to survive? The present handouts by the government are lamentable. People have lost their patience with the distribution of relief.

The riots and violence in Lagos and Ogun States are real. Some estates in the Lekki areas of Lagos are living in apprehension of attacks by the people suffering from hunger virus. More homes will be without food. The reality on the ground is hunger virus. The suffering continues.”

Development Economist Dr Chiwuike Uba said: “The extension of the lockdown will increase the pains and hardships being experienced by the masses. This is made worse, given the heightened insecurity in some parts of the country, occasioned by the lockdown. House and road robberies have resurfaced in some states. The masses may revolt as a result of hunger and this might likely lead to confrontation with the security agencies.”

A lawyer, Mr. Festus Oguche, said: “To the very best of my knowledge, nobody has received any palliative from the Federal Government. Their activities are shrouded in secrecy and there is no transparency. Those entrusted with the responsibility are being dishonest about it.

“There are names profiles of people which can be used by the government. We have banks and identities of their customers. We have the National Population Commission data and other agencies of government that deal with the population that have good grasp of the demography of the nation that will not constitute any difficulty in knowing where and who to go to. If government is sincere in getting the palliatives across to the people, it knows the approach to adopt. 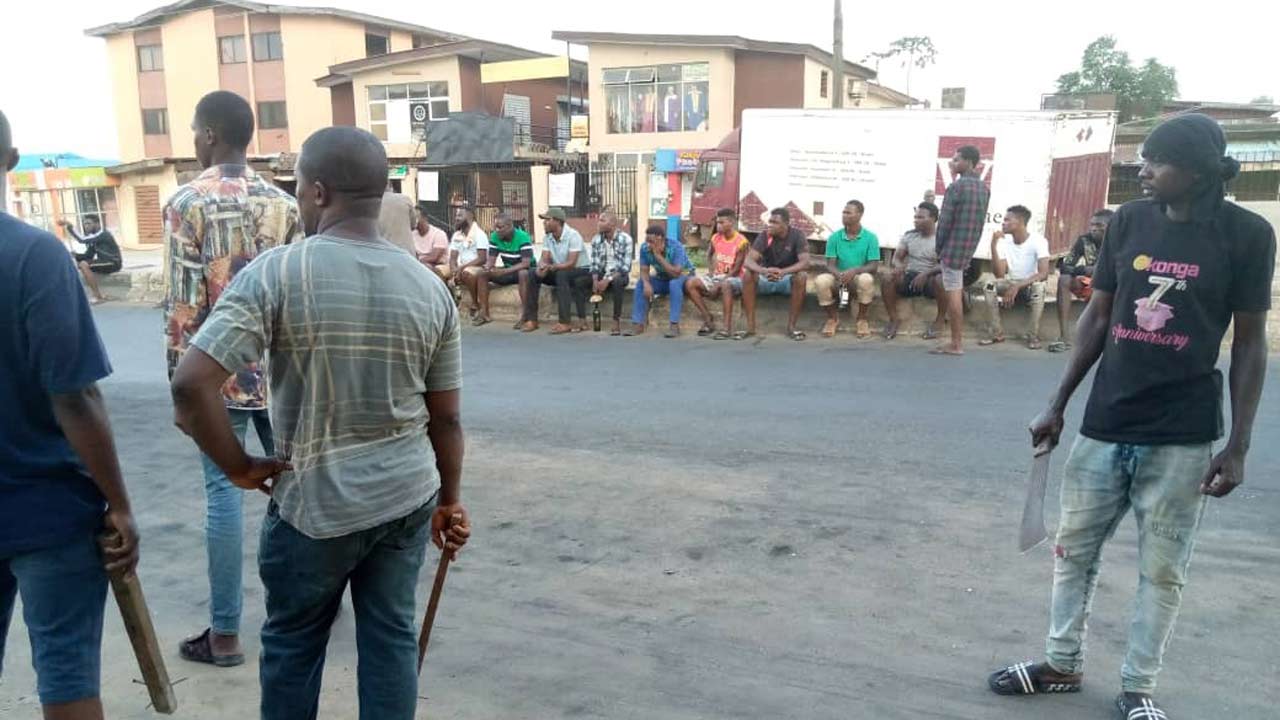 Armed youths ready to resist attacks by robbers at Akowonjo and Egbeda areas of Lagos as insecurity worsens over the COVID-19 lockdown…yesterday. PHOTO: ADA ONYENUCHEYA

The publicity secretary of Yoruba socio-political group, Afenifere, Yinka Odumakin, said: “We understand why it is necessary to extend the lockdown and took note of his (Buhari’s) appreciation of the sacrifices of the past two weeks. But we have our worry about the continuation of the so-called palliatives of the past 14 days. We doubt if these are reaching the people.

“The idea of promising to reach 3.6 million households in a country with over 80 million people living in extreme poverty is a far cry. The president is also enjoined to take note of the upheavals and security challenges in the locked down areas.”

Meanwhile, following the disturbances by hoodlums in parts of Lagos and Ogun States, Inspector General of Police, Abubakar Adamu, yesterday ordered the deployment of extra personnel to boost security in the areas.

The team will be coordinated by Deputy Inspector General of Police (DIG) Peter Babatunde Ogunyanwo, who doubles as the DIG in charge of the Department of Research and Planning of the Force and the coordinating DIG for South-West Geopolitical Zone.

Mba said the IGP also ordered Commissioners of Police across the country to rejig the security architecture in their commands, to effectively tackle all emerging crimes associated with the COVID-19 lockdown.

“They are to intensify patrols around residential areas, markets, shopping malls and all critical national infrastructures in their jurisdictions.

“The Assistant Inspectors General of Police in the 12 Zonal Commands have also been directed by the IGP to bring their supervisory role to bear by ensuring that the commands under their zones are safe and secure for the citizenry to live and thrive.”

This was as Secretary to the Government of the Federation (SGF) and chairman of the Presidential Task Force (PTF) on COVID-19, Boss Mustapha, yesterday disclosed that 92 per cent of all contacts had been identified, following intensified contact listing and isolation.

Speaking at a media briefing in Abuja, Mustapha said the country had also increased laboratories by 100 per cent. According to him, there are now 11 laboratories with Lagos having three; Abuja, two; Irua, one; Ibadan UCH, one; Iree, one; Jos, one; Kano, one, and Abakaliki, one.

On his own part, Minister of Health Osagie Ehanire warned against treating COVID-19 patients in private hospitals or at home, on account of the high risk involved. He advised infected persons to contact the Nigeria Centre for Disease Control (NCDC) through its toll free lines.

He said further: “An additional way to protect against coronavirus infection is the use of face masks. This includes improvised and homemade facemasks or face covering with handkerchiefs or scarves.

“A layered cotton fabric over the mouth and nose guards against particle emission during laughter, exclamation or loud talk and may offer mutual protection to wearers, especially where social distancing may not be achieved, or where close contact may not be avoided with certainty, such as markets.

“This is particularly recommended for sellers, especially of food. There are various models for constructing homemade masks, which should be washed every evening in warm water and dried or ironed.”

William Barr: says no fraud in US election U.S. attorney-general and staunch Trump loyalist, William Barr has finally shredded Donald Trump’s allegations of electoral fraud in the 3 November election. In an interview with AP published today, Barr who had ordered a probe into the END_OF_DOCUMENT_TOKEN_TO_BE_REPLACED

Angry youths set suspect’s house ablaze An electrician identified as Bright Ebenezer Odi, 33, has been confirmed dead after he was allegedly kicked on the scrotum by one Victor Chiekezi Iwu, at Umueje Obinze in Owerri West local government area of Imo State. Iwu reportedly END_OF_DOCUMENT_TOKEN_TO_BE_REPLACED

There was tension around Acme Road, Ogba, Lagos, Southwest Nigeria on Tuesday as Boulos Enterprises, sacks over 70 workers and some union members. Boulos is a company assembling Suzuki motorcycles and other products. It is learnt that the company embarked on the sacking spree as END_OF_DOCUMENT_TOKEN_TO_BE_REPLACED