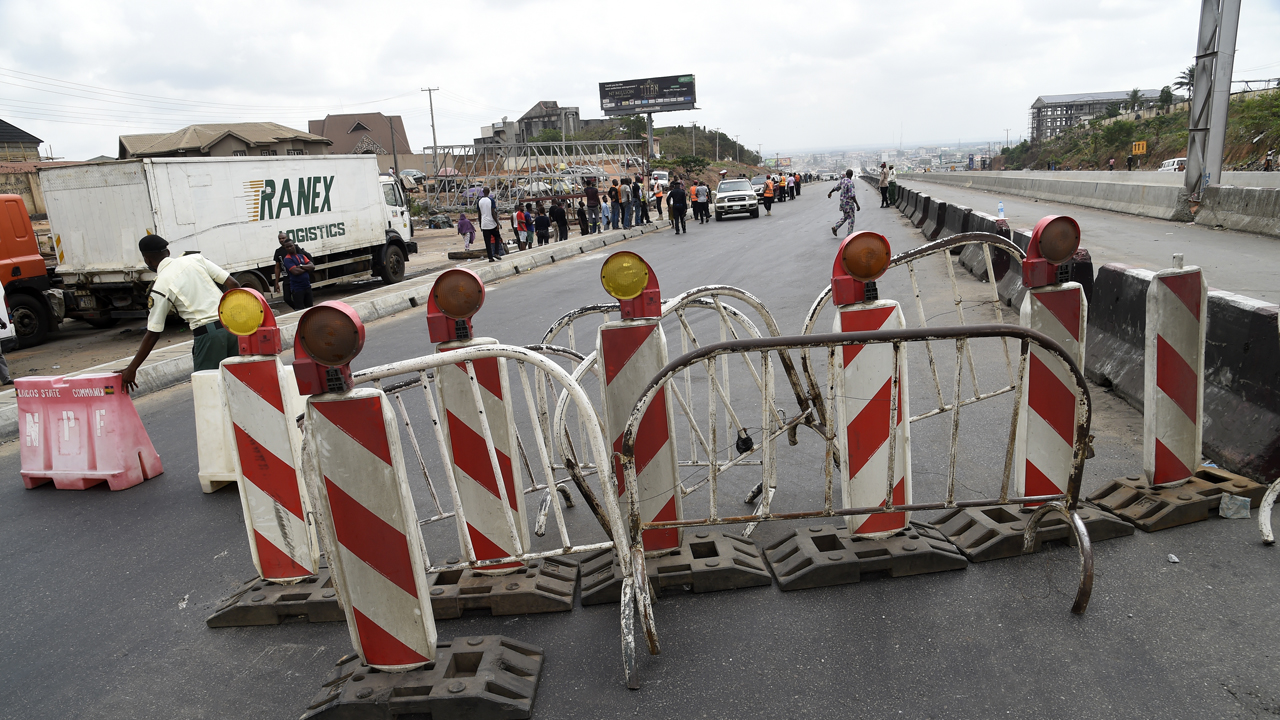 • Crisis in Delta as soldier kills resident for not stopping at a roadblock
• Govt courting uncontrollable regime of rebellion, ASUU, others warn
• Govs beg FG to suspend states’ deductions • Buhari meets panel assessing the impact of the virus on the economy
• 11 more patients discharged in Lagos

Pains of the lockdown across parts of the country went a notch further yesterday when a soldier in Asaba, Delta State, shot and killed a 28-year-old man, Joseph Pessu, for allegedly failing to stop at a roadblock.

The Commander 3 Battalion, Effurun, Major Salim Hassan did not pick several phone calls made to him or reply to text messages aimed at inquiring about the incident.

Delta State Commissioner for Information Charles Aniagwu, however, issued a statement saying military authorities have been asked to carry out an investigation. A delegation has also been sent to the family of the deceased to condole with them, he said, urging the people not to take the laws into their hands.

He expressed hope that a “thorough investigation would be carried out and adequate punishment would be meted out to those involved in the heinous crime.”

He added: “There are better ways of making Nigerians obey the government’s directives without the resort to violence or extra-judicial killing by law enforcement agents.”

The soldier has been reportedly arrested.

This came as the Northern Elders’ Forum (NEF) yesterday warned of “rising anger and frustration among the population, which all governments must address immediately.”

The forum stated this against the backdrop of the lockdown in various states and the ensuing hardship. It said: “Mistakes made in some parts of the country, which gave citizens no opportunities to prepare for lockdowns, are being compounded by failures to follow through with the provisions of assistance in the forms of essentials of life such as food. Promises are not being honoured, leading to the erosion of citizens’ faith in authorities and the violations of lockdown orders.”

According to a statement issued yesterday by NEF Convener Prof. Abdullahi Ango, the forum said the nation “should have been better prepared to deal with” the pandemic and that “resources must be released to enable distribution of food and other essentials in a transparent manner.”

The forum stressed: “This is a national and global crisis that requires national unity and collaboration, and no one should be allowed to divert attention from efforts at containment or divert resources meant to assist particularly the poor. The Federal Government must lead in this direction and should, in addition, lead a long-term assessment of this pandemic on the survival of our economy and that of the African continent.”

Similarly, the Academic Staff Union of Universities (ASUU) cautioned: “Unless the people’s survival needs are factored into the equation, governments at the national and sub-national levels may be courting an uncontrollable regime of rebellion, which may be counterproductive to the cause of fighting the COVID-19 pandemic in Nigeria.”

In a statement entitled, ‘COVID-19: Together We Shall Win’, it noted: “Access to electricity and running water and an unbroken chain of food supply and availability of other essential items should be key components of the policy called ‘lockdown.’”

Signed by ASUU President Prof. BiodunOgunyemi, the statement said unless everyday needs of the people were met, the lockdown of the country might not achieve its desired result of promoting self-isolation and social distancing.

Already, complaints by residents across the country have been increasing with every passing day. At the Federal Capital Territory (FCT), currently locked down alongside Lagos and Ogun States, some bank customers yesterday complained bitterly about their inability to make transactions. This is despite the exemption of financial institutions and providers of essential services.

Most banks at the FCT were closed. A few, which opened partially, only attended to persons wishing to make cash deposits. At the United Bank for Africa (UBA) in Area 3, Garki, Abuja, for instance, some customers who claimed they didn’t have ATM cards were not allowed into the premises.

One of them, Peter Oyerinde, regretted that he trekked for 30 minutes all the way from Lugbe along Airport Road only to be disappointed. He said: “They refused to allow me in, to withdraw the money someone sent to me. They said I should use the ATM machine. But I don’t have any ATM card. I cannot sit down at home and watch my children die of hunger. We don’t have anything to eat.”

Asked why customers without ATM cards were not being allowed to make withdrawals over the counter, a security man replied: “You know there is a lockdown order by the government. Banks are only rendering skeletal services because most of their staff members are not on duty. So, there is nothing we can do now.”

One Joseph Idoko, a customer with Eco Bank, said: “As I speak with you, I had to find my way to the city, all the way from Nyanya (a suburb). I stood in a long queue for over three hours before I could make withdrawals. The pain is nothing to write home about. It is very unfortunate.”

“Our services are very critical because the ambulances, hospitals security agencies and all the critical sectors of the economy need fuel or diesel for their operations,” she said.

An employee of the Imo State Council for Arts and Culture (ISCAC) who pleaded anonymity asked: “Tell me the wisdom in forcing us to go and lock ourselves in our homes with months of non-payment of our salaries. Is it fair to humanity?”

Another employee at the council added: “This is man’s inhumanity to man. How can we survive? Two months’ salaries (February and March) not paid, and they are using soldiers, police and other security agencies to force us to stay at home. See how the soldiers are flogging people on the road. Let them pay us, please, and bring palliatives, so that we will not die of hunger-virus.”

Imo State Commissioner for Information and Strategy Declan Emelumba had on March 26, 2020, issued a statement saying that all workers in the state had been paid in accordance with the governor’s directive.

The Nigeria Governors’ Forum (NGF), meanwhile, has called for urgent fiscal measures to safeguard the liquidity of state governments and suspend all state deductions.

This was disclosed in a communiqué issued on Thursday by NGF Chairman and Ekiti State Governor Kayode Fayemi following the forum’s second COVID-19 teleconference meeting on Wednesday.

Fayemi said the request came following a briefing from the Minister of Finance, Budget and National Planning Zainab Ahmed on fiscal measures taken by the Federal Government to mitigate the economic impact of the COVID-19 pandemic.

He disclosed further that members also received a briefing from Minister of Humanitarian Affairs, Disaster Management and Social Development Hajiya Sadiya Umar Farouq on incentives to help vulnerable households cope with the loss of income and livelihoods in the coming months.

He noted that governors were committed to leading the effort through state focal persons in charge of social protection, to ensure that palliatives including food and cash transfers reach the most vulnerable population in all states.

“Members also resolved to leverage the lockdown situations to send essential food items across borders as part of the palliatives, so that perishables produced in one state get to states that need them unhindered.”

Also, President Muhammadu Buhari, yesterday met with the presidential committee on the impact of the coronavirus on Nigeria’s economy and directed the Ministry of Finance and National Planning to ensure that salaries were paid.

Minister of Finance, Budget and National Planning HajiyaZainab Ahmed, who chairs the committee, said this in Abuja while answering questions from State House correspondents at the end of the meeting.

She said the committee briefed the president on happenings around the world due to COVID-19 and its impact on the country’s economy.

According to her, the president also directed the committee to put in place measures meant to protect the poor and less privileged members of the society from unnecessary hardships as a result of the virus.

She said the president further directed the ministry to ensure that “critical infrastructure like roads, rails are protected and as much as possible, use local inputs so that the country retains value within her economy.”

The Minister of State for Petroleum Resources, Timipre Sylva, who is also a member of the committee, said: “The economy is not in the best of shapes due to COVID-19 and oil prices are collapsing every day, hence the need for the president to be constantly briefed.”

CBN Governor Godwin Emefiele said: “The economy is not looking as simple as everyone thought it would be. The global economy, naturally, as we all know at this time, will suffer growth problems and may even lead to recession globally. So, we are trying to see what we can do as a country to rescue our own situation, so we don’t go the direction many will go. It is not going to be easy but we can only assure our people that we are on top of it and that we will resolve it and Nigerians will still be better for it.”

On a happy note, Lagos State Governor Babajide Sanwo-Olu yesterday announced via Twitter that 11 more patients had recovered and had been discharged.

“I am happy to break to you, my good people of Lagos, the news of the release today of 11 more patients from our facility in Yaba. They have fully recovered and have tested negative for #COVID19 and have been allowed to return home to their families.

“The patients include two females and nine males. Their results came out negative in two rounds of tests.I want to use this opportunity to, once again, thank our frontline health workers and other professionals for their service,” he said.

The Akwa Ibom Government has cancelled the hosting of this year’s annual Christmas Carol festival to curtail the spread of coronavirus in the state. The cancellation was made known in a statement issued by the Commissioner for Culture and Tourism, Mr Orman Esin, in Uyo END_OF_DOCUMENT_TOKEN_TO_BE_REPLACED

Niran Adedokun ‌ It’s doubtful that Nigeria has ever been at this juncture where life means nothing. Last month alone, only God knows the number of lives summarily terminated in the violence that has become a daily occurrence in Nigeria. Another peculiarity of this END_OF_DOCUMENT_TOKEN_TO_BE_REPLACED

The Federal High Court, Abuja, on Wednesday sacked Prof. Kemebradikumo Pondei, Mr Cairo Ojougboh, Dr Joi Nunieh and others from functioning on the board of the Niger Delta Development Commission, (NDDC). In suit numbered ABJ/CS/617/2020, Justice Ahmed Mohammed, in a ruling on an application by END_OF_DOCUMENT_TOKEN_TO_BE_REPLACED

Gbenga Odogun, Lokoja The Kogi State Assembly has urged Governor Yahaya Bello to contest the 2023 Presidential election. The lawmakers made the call after passing a motion to this effect during plenary, in Lokoja, on Wednesday. House Majority Leader, Hassan Abdullahi, while moving the motion END_OF_DOCUMENT_TOKEN_TO_BE_REPLACED

Arik Air operations were on Thursday grounded by the National Union of Air Transport Employees over poor working conditions. The workers blocked the entrance of the airline’s headquarters, carrying placards with different inscriptions. Some of the inscriptions read, “End Arik brutality”, and “Sign our condition END_OF_DOCUMENT_TOKEN_TO_BE_REPLACED