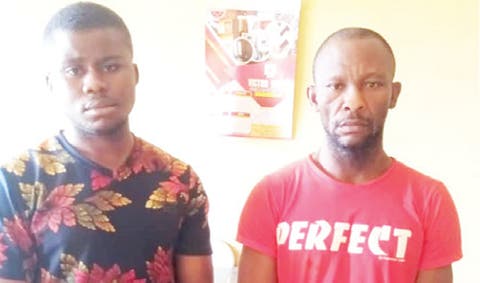 A 43-year-old man, Friday Ezi, has been arrested by the men of the Ogun State Police Command for allegedly stealing seven cars from the Redemption Camp on the Lagos-Ibadan Expressway.

The police have also apprehended a 27-year-old motor spare parts dealer for allegedly buying the stolen cars and dismantling them.

The Police Public Relations Officer in the state, Abimbola Oyeyemi, disclosed these in a statement on Thursday.

The PPRO stated, “The duo were arrested following a report by one Titilayo Otitodogbon, whose   Toyota Camry car with number plate LND 636, was stolen on February 1, 2020, by one of the suspects.

“Upon her report, the DPO, Redemption Camp, CSP Chris Amanyi, detailed his detectives to swing into action and bring the perpetrators to justice.

“The detectives embarked on full-scale forensic and technical investigation, which yielded a positive result when one Friday Ezi, who actually stole the car from the Redemption Camp, was traced to Edo State, where he was promptly arrested on March 10, 2020.

“His arrest and eventual confessional statement led the operatives to Onitsha in Anambra State, where one Onyekachi Atama, who is his receiver and an accomplice, was also arrested on March 15, 2020.

“Preliminary investigation revealed that the suspects had stolen up to seven different cars from the Redemption Camp, but they confessed to have stolen only two cars on different occasions.

“Onyekachi Atama, who is a spare parts dealer at the Motor Parts Market in Onitsha, confessed that once the vehicles were brought to him by Friday Ezi, he used to balkanise them and sell such vehicles in parts.”

The Ogun State Commissioner of Police, Kenneth Ebrimson, commended the investigative team for a job well-done.

Ebrimson directed that the suspects be transferred to the anti-car theft section of the State Criminal Investigation and Intelligence Department for proper investigation and prosecution.

In a related development, the police in Niger State have arrested three suspected armed robbers in the Suleja Local Government Area of the state.

The suspects, Ashiru Usman, 28, of Suleja; Mohammed Yazid, 26, of the Federal Capital Territory, Abuja; and Mahadi Nafiu, 35, of the Zuba area of Abuja, allegedly specialised in snatching vehicles from their owners at gunpoint.

It was gathered that sometime in December 2019, the gang snatched a Toyota Corolla LE at Lugbe, Abuja and a Volkswagen Golf car at Nasarawa State, which were sold for N200,000 and N150,000, respectively.

Nafiu told one of our correspondents that he had been involved in car theft for the past five years.

“I cannot give a good account of what I did with the money. How do I explain to my wife, who is not aware, that I am into armed robbery?” he queried.

The command’s Public Relations Officer, Wasiu Abiodun, said the police personnel recovered from the suspects a pump action gun, one empty shell of cartridge, a knife, a pair of scissors and 40 wraps of Indian hemp.

He said they would be arraigned after investigation.

Felix Onajite Delta State governor, Okowa and SSG, Chiedu Ebie Two top officials of the Delta State government have tested positive to coronavirus (COVID-19). The chief press secretary to the governor of the state, Mr Olisa Ifeajika, who made this known in a statement in Asaba on END_OF_DOCUMENT_TOKEN_TO_BE_REPLACED

JOHN ALECHENU and PETER DAVID Ahead of the governorship primary of the All Progressives Congress in Edo State on Monday (tomorrow) the party has dismissed the order gazetted by the state government that political parties must obtain approval of the governor to hold any political gathering. The END_OF_DOCUMENT_TOKEN_TO_BE_REPLACED

The coasts seems clear on Saturday with the clearance of Governor Godwin Obaseki to seek re-election on the platform of his new party, Peoples Democratic Party (PDP). The Hon. Kingsley Chinda-screening committee gave Obaseki a clean bill of health ahead of the PDP primary election END_OF_DOCUMENT_TOKEN_TO_BE_REPLACED

Davidson Iriekpen, Martins Ifijeh in Lagos and Ernest Chinwo in Port Harcourt There may be no respite in sight for Nigerians as far as Coronavirus is concerned if we take what the authorities are saying. Secretary to the Government of the Federation and Chairman, Presidential END_OF_DOCUMENT_TOKEN_TO_BE_REPLACED

Friday Amobi, Port Harcourt These are not the best of times for medical personnel not only in Nigeria but all over the world especially in countries where the global pandemic of Coronavirus is still raging. In some countries they have continued to live in denials END_OF_DOCUMENT_TOKEN_TO_BE_REPLACED