The Asset Management Corporation of Nigeria has approached the Federal High Court in Lagos for an order to attach the bank accounts of the 2019 governorship candidate of the All Progressives Congress in Delta State, Chief Great Ogboru, and his firm, Fiogret Limited, in a bid to recover a judgment debt of N784m.

In an ex parte application filed before Justice Maureen Onyetenu, AMCON said the N784m debt arose from a July 5, 2013 consent judgment entered in its favour by Justice Okon Abang.

The corporation said contrary to its expectation, about seven years after Justice Abang’s judgment, Fiogret Limited and Ogboru “have not taken any step(s) to satisfy/liquidate the judgment sum and the accruable interest.”

AMCON said its investigation had revealed that Fiogret and Ogboru had accounts in 22 banks in Nigeria. It prayed the court to summon all the banks to disclose how much Fiogret Limited and Ogboru have with them and for the court to make an order attaching the funds “to prevent the judgment debtors from dissipating their funds with the various garnishees (banks).”

The corporation said this was the only means by which it could “reap the fruits of its hard-earned judgment in the suit herein.”

But Fiogret Limited and Ogboru are challenging Justice Onyetenu’s jurisdiction to hear AMCON’s ex parte application, seeking the seizure of their funds.

The firm and the businessman said they had already appealed Justice Abang’s July 5, 2013 judgment up to the Supreme Court while their Motion on Notice praying for a stay of execution of the judgment was also pending before the apex court.

They contended that contrary to AMCON’s argument, there was no provision in AMCON Act, stipulating that they must pay the N784m judgment sum into an account approved by the court pending the determination of their appeal by the Supreme Court. 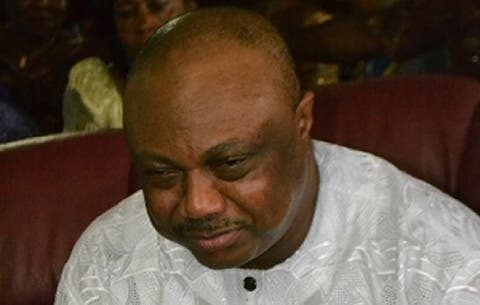 On Monday, Justice Onyetenu adjourned till April 1, 2020 to take arguments from the parties on the move by AMCON to attach the defendants’ accounts.

Felix Onajite Delta State governor, Okowa and SSG, Chiedu Ebie Two top officials of the Delta State government have tested positive to coronavirus (COVID-19). The chief press secretary to the governor of the state, Mr Olisa Ifeajika, who made this known in a statement in Asaba on END_OF_DOCUMENT_TOKEN_TO_BE_REPLACED

JOHN ALECHENU and PETER DAVID Ahead of the governorship primary of the All Progressives Congress in Edo State on Monday (tomorrow) the party has dismissed the order gazetted by the state government that political parties must obtain approval of the governor to hold any political gathering. The END_OF_DOCUMENT_TOKEN_TO_BE_REPLACED

The coasts seems clear on Saturday with the clearance of Governor Godwin Obaseki to seek re-election on the platform of his new party, Peoples Democratic Party (PDP). The Hon. Kingsley Chinda-screening committee gave Obaseki a clean bill of health ahead of the PDP primary election END_OF_DOCUMENT_TOKEN_TO_BE_REPLACED

Davidson Iriekpen, Martins Ifijeh in Lagos and Ernest Chinwo in Port Harcourt There may be no respite in sight for Nigerians as far as Coronavirus is concerned if we take what the authorities are saying. Secretary to the Government of the Federation and Chairman, Presidential END_OF_DOCUMENT_TOKEN_TO_BE_REPLACED

Friday Amobi, Port Harcourt These are not the best of times for medical personnel not only in Nigeria but all over the world especially in countries where the global pandemic of Coronavirus is still raging. In some countries they have continued to live in denials END_OF_DOCUMENT_TOKEN_TO_BE_REPLACED