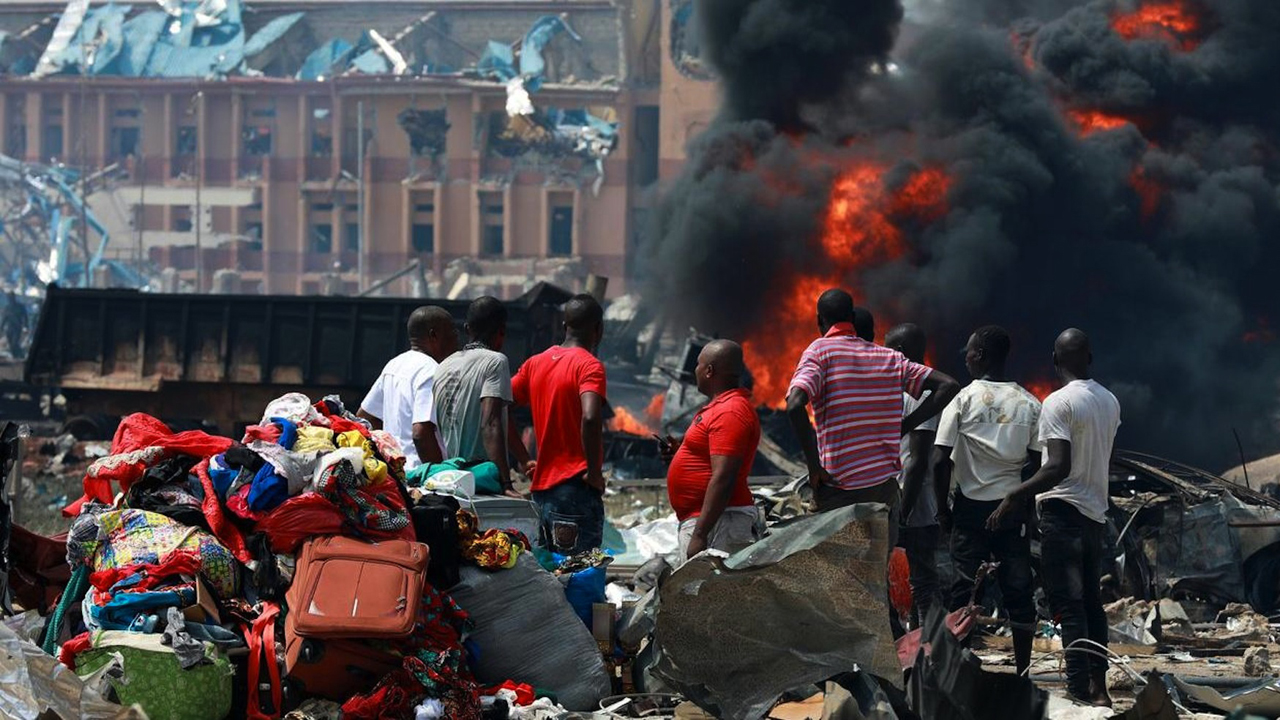 Emergency workers were yesterday still searching for the body of a man who was declared missing by family members three days after a massive explosion rocked Abule-Ado, a community in Amuwo-Odofin Local Government Area of Lagos State.

Three persons who suffered major injuries were also being treated at different hospitals while 57 others have been treated and discharged. Briefing newsmen yesterday on the extent of rescue work done since the explosion occurred on Sunday, the Director-General of the Lagos State Emergency Management Agency (LASEMA), Dr. Olufemi Oke-Osanyintolu, said that a total of 276 persons were displaced as a result of the explosion, while 57 others who were trapped under the rubbles were rescued.

According to him, three others were still being treated at various hospitals across Lagos. “One is on admission at the Lagos State University Teaching Hospital (LASUTH), another is being treated at the Nigerian Navy Reference Hospital Ojo, and the third is at Gold Treat Hospital.

He explained that a post-disaster assessment by all relevant government agencies was ongoing adding that members of the public would be fully briefed on the outcome of the Investigation.

However, the demolition of unstable buildings was halted yesterday as the Nigeria National Petroleum Corporation (NNPC) asked that the pulling down of structures be stopped until there is a right temperature for it. It was learnt the suggestion was because there was a rupture on Tuesday that created a scare when a gush of fuel was experienced. As at yesterday, fuel was still being evacuated through the burst pipeline.

The Minister of Humanitarian Affairs, Disaster Management and Social Development, Sadiya Farouq, who yesterday paid a visit to the explosion site, described the incident at Abule Ado as devastating beyond description. Farouq was in company of the Director-General of National Emergency Management Agency (NEMA), Mustapha Maihaja and the deputy governor of Lagos, Dr. Obafemi Hamzat.

She noted that had she not visited Abule-Ado, she would not have understood the magnitude of the effect of the explosion, saying that the Federal Government would work with the state government to forestall future occurrences.

“We commiserate with the people of Lagos over this incident. This is an unfortunate incident and I will say that seeing is believing. If we had not come here, we won’t have understood the extent of the devastation. We will join hands with the state government to see that we bring succour and relief to the affected victims. We are going to be part of the committee that will come up with a strategic way of addressing these issues so that we don’t see this kind of unfortunate incident occurring ever again in our country.”

On his part, Hamzat assured that the community would be rebuilt as against insinuations that the residents would lose their property to the Federal Government. “We will do whatever it will take to bring succour to those affected. The community will be rebuilt and there is no question about that, but it is important to note that we are first after those in the hospital because humans beings are more important than property. We are gathering data of those in this community to make sure everyone is accounted for and from there we will take the next step.”

Meanwhile, the Catholic Archdiocese of Lagos State has described as hilarious the N2billion fund that the state government promised to give to victims of the explosion. Director of Education, Jerome Oduntan, said the Catholic Church spent over N2billion on the infrastructure of the school that was reduced to rubbles.

He said: “I wish the state government would give us the whole N2billion, so we can start rebuilding immediately. We cannot wait. We had nine structures and eight was totally brought down, the ninth structure is standing only on blocks, as the roof is gone. The state government said it wants to give N2billion to victims of the explosion when our school alone was constructed with over that amount and we are talking of about 200 affected houses.”

This is just as human rights lawyer, Femi Falana (SAN) has urged the Lagos State government to conduct a coroner’s inquest into the cause of the explosion. Falana, in a statement issued on Wednesday and personally signed by him, insisted that the inquest is necessary to determine the cause of the tragic incident and make appropriate recommendations to prevent future occurrence.

“The law provides that an inquest shall hold whenever a Coroner is informed that the death of a deceased person within his district was as a result of death ‘in a violent, unnatural or suspicious situation,’’ Falana stated.

Also, Aare Oladotun Hassan, the Oluomo of Abule-Ado kingdom and coordinating chairman, Abule Ado Stakeholders for Justice, at a press conference yesterday, called on President Muhammadu Buhari to personally visit the scene of the explosion.

“Apart from a press statement, we are aggrieved that President Buhari has not deem it fit to visit the Abule-Ado community despite the magnitude of the tragedy. We are aghast that President Buhari prefers to view images of the explosion as shown to him by Governor Babajide Sanwo-Olu rather than coming in person to view for himself the scene of the crisis.

“The Federal Government must also unravel the real causes of the explosion. We demand an immediate forensic investigation of the remote cause of the blast, ancillary facts about the pre-blast and post-trauma management of the victims.”

Felix Onajite Delta State governor, Okowa and SSG, Chiedu Ebie Two top officials of the Delta State government have tested positive to coronavirus (COVID-19). The chief press secretary to the governor of the state, Mr Olisa Ifeajika, who made this known in a statement in Asaba on END_OF_DOCUMENT_TOKEN_TO_BE_REPLACED

JOHN ALECHENU and PETER DAVID Ahead of the governorship primary of the All Progressives Congress in Edo State on Monday (tomorrow) the party has dismissed the order gazetted by the state government that political parties must obtain approval of the governor to hold any political gathering. The END_OF_DOCUMENT_TOKEN_TO_BE_REPLACED

The coasts seems clear on Saturday with the clearance of Governor Godwin Obaseki to seek re-election on the platform of his new party, Peoples Democratic Party (PDP). The Hon. Kingsley Chinda-screening committee gave Obaseki a clean bill of health ahead of the PDP primary election END_OF_DOCUMENT_TOKEN_TO_BE_REPLACED

Davidson Iriekpen, Martins Ifijeh in Lagos and Ernest Chinwo in Port Harcourt There may be no respite in sight for Nigerians as far as Coronavirus is concerned if we take what the authorities are saying. Secretary to the Government of the Federation and Chairman, Presidential END_OF_DOCUMENT_TOKEN_TO_BE_REPLACED

Friday Amobi, Port Harcourt These are not the best of times for medical personnel not only in Nigeria but all over the world especially in countries where the global pandemic of Coronavirus is still raging. In some countries they have continued to live in denials END_OF_DOCUMENT_TOKEN_TO_BE_REPLACED