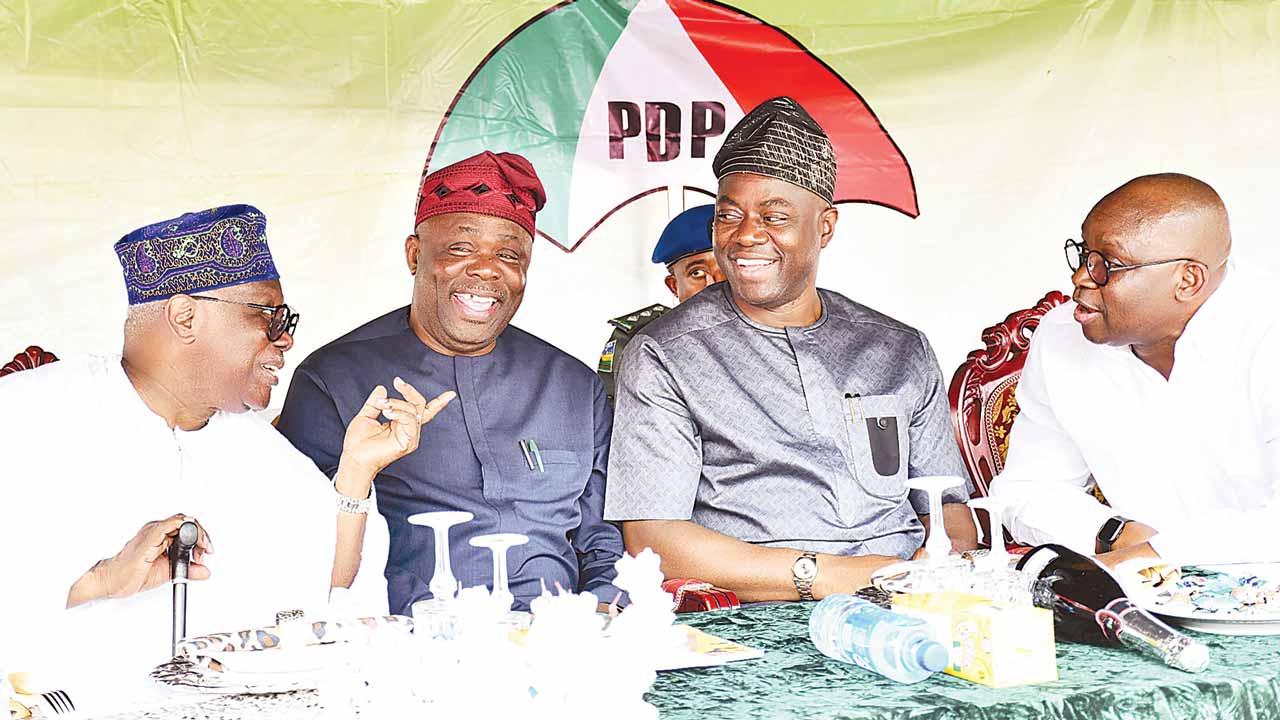 The crisis broke out around 4:00 p.m. at the party’s secretariat located at Ajilosun area of Ado-Ekiti capital city when supporters of the two combatants were waiting for arrival of members of an appeal panel sent to adjudicate on matters arising from the conduct of last Saturday’s congress.

It was learnt that dangerous weapons such as bottles, cutlasses and stones were used as members of panel sent by Chief Uche Secondus-led executive arrived, which prompted the police to immediately draft his men to the place. Several persons were said to have been wounded in the process.

When The Guardian visited the secretariat, over 30 policemen were at the entrance of the one-storey building, while every door was under lock and key.

Over eight police Hilux vans deployed from Okesa and Ologede Police stations were stationed at strategic locations while all members have been dispersed to avert loss of lives.

Responding to the attack, Olujimi blamed Fayose and his supporters for allegedly trying to define the PDP as a party of violence by mobilising thugs to where the appeal panel was expected to sit.

“Because we caught them in that dastardly act at Petim Hotel on Saturday, they thought they could right the wrongs with the appeal panel by being violent,” she said.

Fayose, who responded through his Media Aide, Lere Olayinka, said that the fact that Olujimi wants to appeal panel, showed her group lost the ward congress.

“After winning election, will you go and submit petition at tribunal? You don’t file petition against a congress you claimed to have won,” he said.

In another development, the South-West leaders of the People’s Democratic Party (PDP) yesterday reiterated the party’s determination to take over the remaining five states controlled by the All Progressives Congress (APC).

At an enlarged meeting of the party in Ibadan, the Oyo capital, facilitated by Governor Seyi Makinde of Oyo State, held at the Government House, Agodi, Ibadan, the party leaders stressed the need for unity to achieve the desired results.

George, who enjoined all members of the party to remain united to form a common front to dislodge the ruling APC in the remaining five South-West states, noted that if the party is united, it could achieve its target.

Olalekan Adetayo, Abuja The President, Major General Muhammadu Buhari (retd.), has signed the Coronavirus Disease Health Protection 2021 which made the use of face masks in public places mandatory among other measures to curtail further spread of COVID-19. The Chairman of the Presidential Task Force END_OF_DOCUMENT_TOKEN_TO_BE_REPLACED

Olalekan Adetayo, Abuja The President, Major General Muhammadu Buhari (retd.), has signed the Coronavirus Disease Health Protection 2021 which made the use of face masks in public places mandatory among other measures to curtail further spread of COVID-19. The Chairman of the Presidential Task Force END_OF_DOCUMENT_TOKEN_TO_BE_REPLACED

Actress Bisi Ididapo-Obe has taken to social media to express her joy as she turns 44 on Wednesday, Igbere TV reports. The Surulere-born filmmaker posted stunning pictures of herself and a video on Instagram showing off her dance moves. She wrote: “HAPPY BIRTHDAY TO ME END_OF_DOCUMENT_TOKEN_TO_BE_REPLACED

By Okodili Ndidi, Abuja The fate of the course mates to the newly appointed Chief of Defence State, Major General Leo Irabor (Regular Course 34), is still hanging on the balance as the Defence Headquarters braces for resumption of the new Service Chiefs. Military sources END_OF_DOCUMENT_TOKEN_TO_BE_REPLACED

The Hausa community in Orlu, Imo State, on Tuesday accused the operatives of the Eastern Security Network established by the outlawed Indigenous Peoples of Biafra, of killing four of its members on Monday. Many people had been reportedly killed, and property destroyed when the IPOB END_OF_DOCUMENT_TOKEN_TO_BE_REPLACED