•Monarchs queried for shunning meeting •No plan to depose Ewi, others says govt 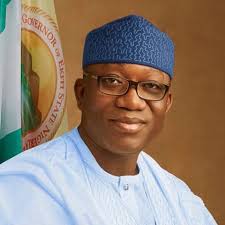 Ekiti State Governor Kayode Fayemi has queried 11 prominent monarchs, demanding explanation for their absence from the Council of Traditional Rulers monthly meetings and state official functions for the past six months.

The governor, through Bureau of Chieftaincy Affairs, gave the traditional rulers 72 hours to respond to the query.

The Bureau, in a letter dated March 11 and signed by its Permanent Secretary, Mr. A. O. Adeoye, said the monarchs’ deliberate actions and inactions without any justification flagrantly negated the administration of chieftaincy institution in the state.

A copy of the paragraph letter marked P&E/CH/118/Vol.VII and titled “Re: Absence from State functions and Council of Traditional Rulers’ Monthly Meeting” and sighted by our correspondent indicated that Governor Fayemi has given the monarchs 72 hours to respond to the query issued them.

Governor Fayemi, in a statement by his Chief Press Secretary, Yinka Oyebode, has debunked insinuation that the government was allegedly making moves to depose the affected traditional monarchs.

He described the allegations as mere conjectural statements and malicious misrepresentation of the true situation, saying the rumour was an attempt by the opposition to incite the people against the government.

Felix Onajite Delta State governor, Okowa and SSG, Chiedu Ebie Two top officials of the Delta State government have tested positive to coronavirus (COVID-19). The chief press secretary to the governor of the state, Mr Olisa Ifeajika, who made this known in a statement in Asaba on END_OF_DOCUMENT_TOKEN_TO_BE_REPLACED

JOHN ALECHENU and PETER DAVID Ahead of the governorship primary of the All Progressives Congress in Edo State on Monday (tomorrow) the party has dismissed the order gazetted by the state government that political parties must obtain approval of the governor to hold any political gathering. The END_OF_DOCUMENT_TOKEN_TO_BE_REPLACED

The coasts seems clear on Saturday with the clearance of Governor Godwin Obaseki to seek re-election on the platform of his new party, Peoples Democratic Party (PDP). The Hon. Kingsley Chinda-screening committee gave Obaseki a clean bill of health ahead of the PDP primary election END_OF_DOCUMENT_TOKEN_TO_BE_REPLACED

Davidson Iriekpen, Martins Ifijeh in Lagos and Ernest Chinwo in Port Harcourt There may be no respite in sight for Nigerians as far as Coronavirus is concerned if we take what the authorities are saying. Secretary to the Government of the Federation and Chairman, Presidential END_OF_DOCUMENT_TOKEN_TO_BE_REPLACED

Friday Amobi, Port Harcourt These are not the best of times for medical personnel not only in Nigeria but all over the world especially in countries where the global pandemic of Coronavirus is still raging. In some countries they have continued to live in denials END_OF_DOCUMENT_TOKEN_TO_BE_REPLACED