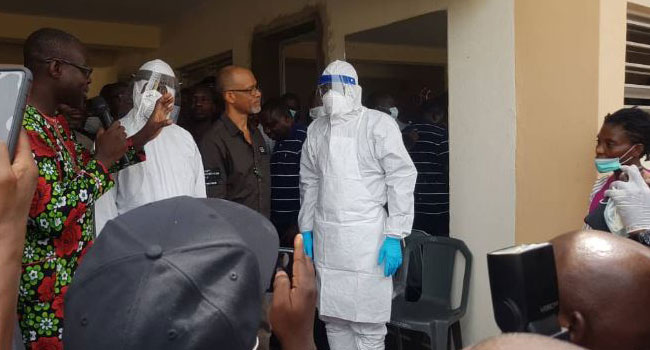 The Lagos State Government says all the one hundred and seventy-nine people on isolation who had contact with the coronavirus index case in Nigeria, have been released.

Out of the 179 people who had contact with the index case, 40 of them were quarantined in Ogun State while the rest of them were monitored in Lagos State.

According to the state Commissioner for Health, Prof. Akin Abayomi, since the 179 contacts persons with the Italian had exceeded the mandatory 14 days isolation, they have been released because none of them developed any symptom of the disease.

However, the state government is still keeping him under isolation because he still has some secretion of the virus. And will conduct another test within 48 hours after and if he is still negative, we will set him free.

“We are close to discharging the index case, we want to be sure he poses no danger to society anymore.”

On the Nigerian who was initially tested positive to Coronavirus for being in contact with the index case, Abayomi said he had now been tested negative twice and might have been released by now.

Adebayo Folorunsho-Francis Health professionals say that, as of now, there is no standardised or accurate dosing for ivermectin in the management of COVID-19. This, they say, is because the drug was not designed ab initio for the treatment of the contagion that has infected over END_OF_DOCUMENT_TOKEN_TO_BE_REPLACED

Zamfara govt gifts Kankara schoolboys’ abductor free education As part of the amnesty-for-bandits initiative of the Zamfara State government, the brains behind the abduction of over 300 schoolboys in Kankara, Katsina State last December, Awwalun Daudawa, will get the support of the state government to END_OF_DOCUMENT_TOKEN_TO_BE_REPLACED

NIGERIA expects it’s first batch of Coronavirus vaccines to arrive the country on Monday. The SGF who is the Chairman of the Presidential Task Force on Coronavirus disclosed this. He said, “Well, I can assure you that the vaccines are coming and they are coming END_OF_DOCUMENT_TOKEN_TO_BE_REPLACED

UnderTow After six years in office, President Muhammadu Buhari has admitted that one unclear thing led to another and his presidency fell asleep.  Nevertheless, he is awake now, and he is ready to get things going, starting with changing the circumstances of the hoi polloi END_OF_DOCUMENT_TOKEN_TO_BE_REPLACED