The House of Representatives has indefinitely suspended the consideration of the $22.79bn external loan request by the President, Major General Muhammadu Buhari (retd.).

The House had listed the report by its Committee on Aids, Loans and Debt Management on the 2016–2018 Federal Government External Borrowing (Rolling) Plan as the last item for consideration on the order paper for Wednesday’s proceeding.

The Speaker, Femi Gbajabiamila, however, asked that the consideration be stood down without giving a new date.

“We will step that down for today,” Gbajabiamila said, asking the Chairman, Rules and Business, Abubakar Fulata, to move for the standing down.

When asked to respond to the indefinite suspension of the loan request by the House, the Media Adviser to the Finance Minister, Mr Yunusa Abdullahi, said, “No comments please.”

The Speaker on Tuesday had announced that the loan would be considered on Wednesday.

He had made this known in reaction to a member of the House, Mr Henry Nwawuba, who presented a petition by a group of South-East elite, against the consideration and approval of the external loan.

The Senate last week approved the loan but not without protests from the opposition senators led by the Minority Leader, Enyinnaya Abaribe. 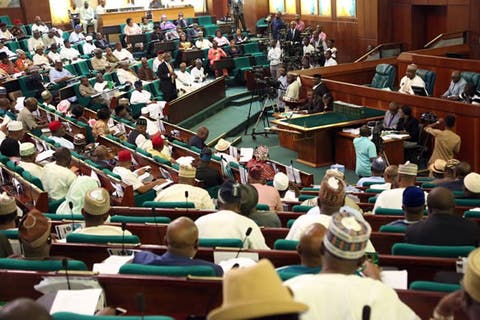 Meanwhile, the Speaker on Wednesday named the committees that would interface with the Federal Government and other stakeholders on the falling prices of crude oil globally.

The House on Tuesday had raised the alarm over the sharp fall in the global oil prices, noting the adverse effect it would have on Nigeria’s economy especially the implementation of the 2020 Appropriation Act.

The House had mandated its committees on finance, petroleum, and budget and national planning to interface with the executive and report back within two weeks.

On Wednesday, Gbajabiamila said the House Committee on Appropriations chaired by Mr Aliyu Betara, should also be part of the interaction since the crude price would affect the national budget and the oil benchmark.

At the Tuesday plenary, Chairman of the House Committee on Finance, Mr James Faleke, moved a motion of urgent public importance, warning the coronavirus outbreak, causing oil prices to fall, would frustrate the 2020 budget.

Amid tumbling prices of crude oil, the Federal Government had announced plans to cut the country’s 2020 budget.

Buhari was billed to get a report on Tuesday on what his regime could do to salvage the N10.59tn budget.

The budget review committee has a primary duty to reassess the $57 oil benchmark for the budget and ultimately recommend an appropriate size.

In another development, the Speaker has set up a panel headed by Mr Abdulraheem Olawuyi to ensure proper implementation of the 2018 Appropriation Act concerning the National Assembly’s budget.

The House had on February 20 said the Federal Government owed the National Assembly and the judiciary over N22.5bn from the previous national budgets.

According to the House, the legislature and the judiciary were underpaid to the tune of N1.2bn and N833m, respectively, between January and November 2018.

Nigeria’s Deputy Commissioner of Police, Abba Kyari, is not new to being enmeshed in corruption cases. The latest scandal is the revelation by serial internet fraudster, Ramon Abbas, more commonly Hushpuppi, who claimed to have paid bribe to Kyari arrest one of his friends in END_OF_DOCUMENT_TOKEN_TO_BE_REPLACED

Nigerian serial fraudster, Ramon Abass, popularly known as Hushpuppi, has agreed to plead guilty to the money laundering charge against him. Hushpuppi, who is known for his luxury lifestyle, was arrested in the UAE in June 2020 alongside 11 of his associates over allegations bordering END_OF_DOCUMENT_TOKEN_TO_BE_REPLACED

The United Kingdom Parliament has said Nigerians under President Muhammadu Buhari administration are at the mercy of non-state actors who unleash attacks on individuals and communities at will. Members of the House of Lords, the upper chamber of the parliament; Caroline Cox, Rowan Williams, David END_OF_DOCUMENT_TOKEN_TO_BE_REPLACED

Some unknown gunmen, believed to be bandits, have killed the All Progressives Congress (APC) chairmanship candidate for the Kachia Local Government Area of Kaduna State, Alamkah Dominic Usman. The APC leader was shot dead along Keffi-Akwanga road in Nassarawa State on his way to Benue END_OF_DOCUMENT_TOKEN_TO_BE_REPLACED

Daud Olatunji   Men of the Ogun State Police Command have arrested an ex-convict, Jamiu Malomo, for allegedly killing a suspected sex worker, Azeezat Akande, 28. The incident occurred at Ilupeju community, Oke-Aregba, Abeokuta, after the 18-year-old suspect had sex with the victim. The state END_OF_DOCUMENT_TOKEN_TO_BE_REPLACED