The Attorney General of Kano State, Ibrahim Muktar, on Wednesday said the state government did not banish the deposed Emir of Kano, Alhaji  Muhammadu  Sanusi II.

Muktar said the state government was clear in its press statement on Monday that Sanusi was deposed, but never made any reference to any banishment.

The Kano AG said this on Channels Television’s Sunrise Daily programme on Wednesday.

Muktar said this just as security was on Wednesday beefed up in a compound, where Sanusi is being detained in Awe town in the Awe Local Government Area of Nasarawa State.

On Monday, the dethroned monarch was banished to Loko, a remote location in Nasarawa State. On Tuesday,  he was relocated to Awe.

Sanusi’s legal team, led by a former President of the Nigerian Bar Association, Abubakar Balarabe-Mahmoud,  on Tuesday, asked the government to release Sanusi or face a legal action.

The lawyers, who described Sanusi’s banishment and detention as illegal, alleged that the deposed Emir was being subjected to maximum stress and trauma.

But on Wednesday, the Kano State attorney general said the state government did not banish  Sanusi.

He said, “If you listen to the Secretary to the State Government when he was addressing the press on the issue of the removal of the emir from office, there was nowhere he stated that the emir was banished from Kano State. 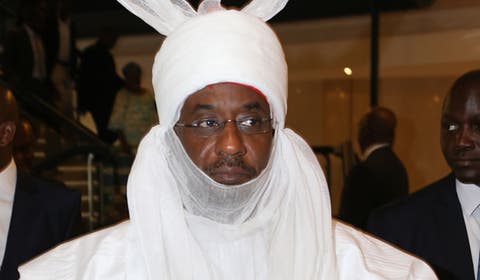 “We have been hearing from the media that he has been banished but what I know is that he was taken out of Kano State, but banishment was not part of our decision. There is no such decision to the best of my knowledge.”

‘Why security agents whisked Sanusi away from Kano’

Muktar said security agents decided to whisk Sanusi away from Kano State due to intelligence reports they had.

He said it was a normal practice for deposed emirs to be moved away to maintain peace in the state, adding that such an action was not in contravention of the constitution, which guarantees freedom of movement.

The AG further stated that Sanusi was not removed because of the corruption probe, but strictly because of insubordination.

When asked if the anti-corruption agency in Kano would continue with Sanusi’s probe, Muktar responded, “No decision on that actually. I cannot pre-empt the position of the government on whether investigation will stop or will continue. I cannot say as of now.”

Sanusi has been in Nasarawa State since his removal on Monday and has been denied access to visitors, according to his lawyers.

A fact check by The PUNCH, showed that Muktar’s position contradicted the letter of deposition given to Sanusi on Monday.

It was learnt that while the SSG did not say in his statement that Sanusi had been banished, a copy of the letter sent to Sanusi read that he would be taken to Nasarawa.

It read in part, “I wish to inform you that the Kano State Executive Council under the chairmanship of his Excellency, the Executive Governor of Kano State, Dr Abdullahi Umar Ganduje, OFR, during its sitting on March 9, 2020/14, Rajab 1441A.H has approved and directed your immediate removal and dethronement as the Emir of Kano and also for your immediate relocation to Nasarawa State which is done in line with the relevant section of the Kano State Emirate Council Law of 2019.”

Similarly, Ganduje’s media aide, Salihu Yakasai, had said on Twitter on Monday that Sanusi would be denied access to visitors during his time in Nasarawa.

Meanwhile,   security was  on Wednesday beefed up  in a compund, where the Emir is being detained  at Awe town in Nasarawa State.

No fewer than  40 security agents, including policemen, personnel of the Department of State Services and the Nigeria Security and Civil Defence Corps, were deployed in the compound, which has three houses.

One of our correspondents, who visited Awe counted no fewer than 40 policemen guarding the compound,

A police vehicle with  number plate 3623 was parked in front of the houses, close to the palace of the paramount ruler of Awe Chiefdom, Alhaji Isah Umar.

The compound, which was  said to be a private building of the Chairman of the Local Government Area, Mr Umar Abubakar, is along the road that leads  to Benue State.

The security agents turned back sympathisers who thronged the house to visit the dethroned Emir.

Two paramount rulers – the Yakanajin Uke, Alhaji Ahmad  Abdullai, and the Sarkin Karshi, Dr Muhammed  Bako, –  were among the people prevented from visiting  the deposed  Emir.

The monarchs, who got to the gate of the compound around 1:30pm, were turned back by the security men.

The overzealous security agents also chased  away a crowd  who had gathered in front of the compound. They also harassed journalists,  who were at the gate of the compound.

The police seized  mobile telephones of The  PUNCH  and The Guardian correspondents on the grounds that they took pictures of the houses without approval. The overzealous security men later returned  the phones and asked the journalists to delete the pictures.

Felix Onajite Delta State governor, Okowa and SSG, Chiedu Ebie Two top officials of the Delta State government have tested positive to coronavirus (COVID-19). The chief press secretary to the governor of the state, Mr Olisa Ifeajika, who made this known in a statement in Asaba on END_OF_DOCUMENT_TOKEN_TO_BE_REPLACED

JOHN ALECHENU and PETER DAVID Ahead of the governorship primary of the All Progressives Congress in Edo State on Monday (tomorrow) the party has dismissed the order gazetted by the state government that political parties must obtain approval of the governor to hold any political gathering. The END_OF_DOCUMENT_TOKEN_TO_BE_REPLACED

The coasts seems clear on Saturday with the clearance of Governor Godwin Obaseki to seek re-election on the platform of his new party, Peoples Democratic Party (PDP). The Hon. Kingsley Chinda-screening committee gave Obaseki a clean bill of health ahead of the PDP primary election END_OF_DOCUMENT_TOKEN_TO_BE_REPLACED

Davidson Iriekpen, Martins Ifijeh in Lagos and Ernest Chinwo in Port Harcourt There may be no respite in sight for Nigerians as far as Coronavirus is concerned if we take what the authorities are saying. Secretary to the Government of the Federation and Chairman, Presidential END_OF_DOCUMENT_TOKEN_TO_BE_REPLACED

Friday Amobi, Port Harcourt These are not the best of times for medical personnel not only in Nigeria but all over the world especially in countries where the global pandemic of Coronavirus is still raging. In some countries they have continued to live in denials END_OF_DOCUMENT_TOKEN_TO_BE_REPLACED