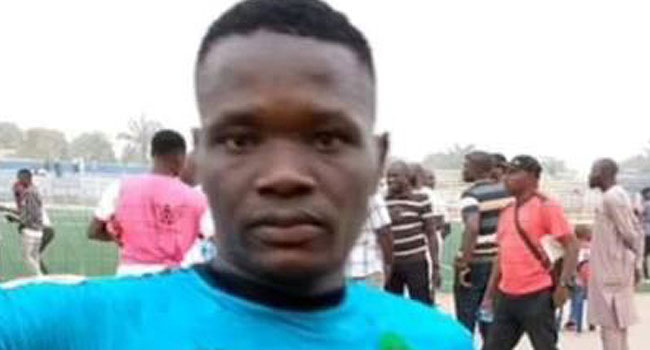 The League Management Company (LMC) has confirmed the death of Nasarawa United’s defender, Chineme Martins, who slumped during Sunday’s NPFL clash against Katsina United in Lafia.

The player was attended to by medics of the two clubs and was later rushed to Dalhatu- Araf specialist hospital where he was pronounced dead.

Chairman of LMC, Shehu Dikko says the league regrets the passing of the young footballer in his prime and that the LMC expects an autopsy do be carried out to establish the true cause of his death.

Yusuf Alli, Abuja  THE Economic and Financial Crimes Commission  (EFCC) yesterday quizzed the Speaker of the Ondo State House of Assembly, Mr. Bamidele Oleyelogun, over his involvement in an alleged N2.4million fraud. A source said: “The commission had received a petition accusing the Speaker of being END_OF_DOCUMENT_TOKEN_TO_BE_REPLACED

A 31-year-old woman has confessed on how her boyfriend made to sell her only child for N300,000 to a buyer in Imo State. According to the woman, Titilayo Kudaisi, her boyfriend, Seyi Akinsete whom she met four months had been into the business of stealing END_OF_DOCUMENT_TOKEN_TO_BE_REPLACED

Police say the houseboy received information that his employer had a lot of money at home ByAgency Report The police in Ondo State on Thursday paraded one Emmanuel Akpan, a houseboy, with his accomplice, Goodness Ekpe, for allegedly killing his employer, Febisola Adebayo. Bolaji Salami, commissioner of END_OF_DOCUMENT_TOKEN_TO_BE_REPLACED

Pfizer confirms fake vaccine shots on sale in two countries × Vials of the Pfizer-BioNTech COVID-19 vaccine are pictured at the Sheba Medical Center, Israel. Photo: AFP Fake doses of the Pfizer coronavirus vaccine were being sold in Mexico and Poland for as much as END_OF_DOCUMENT_TOKEN_TO_BE_REPLACED