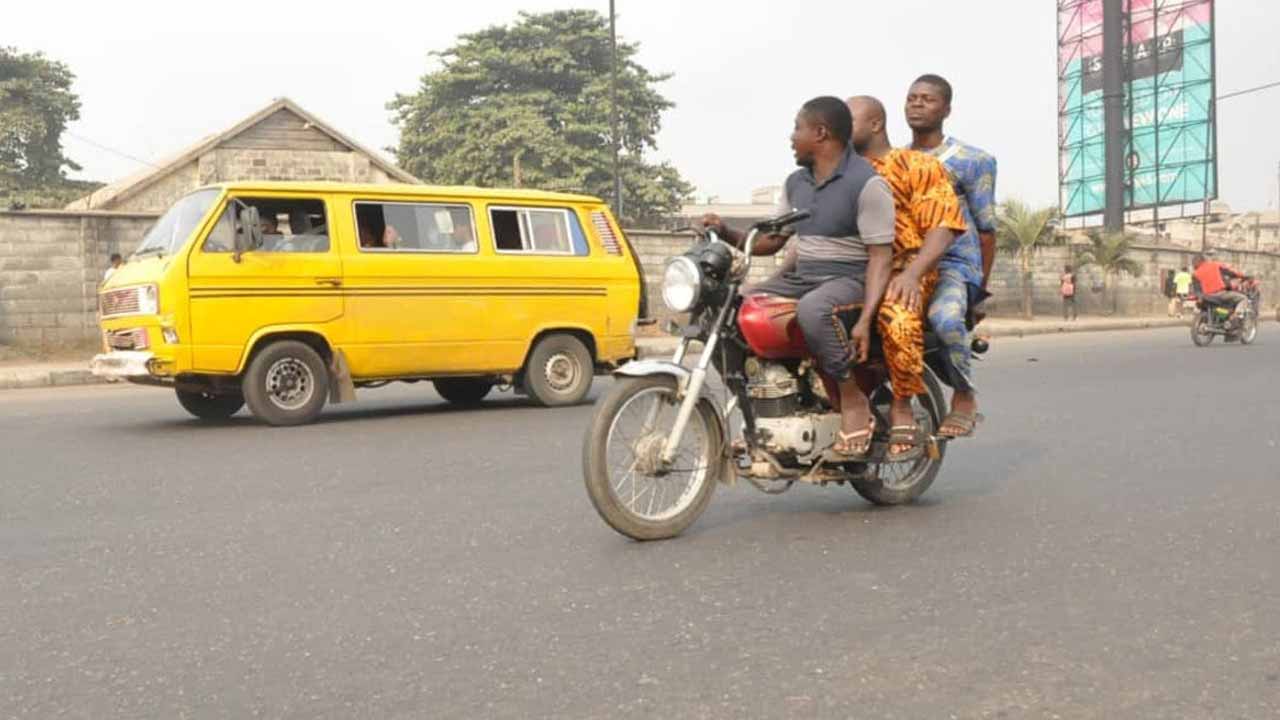 It is now five weeks since the Lagos State Governor, Babajide Sanwo-Olu restricted commercial tricyclists and motorcyclists, popularly known as keke Marwa and okada from plying in six major local councils, major highways and bridges. While compliance is high in some of the restricted areas, it is business as usual in some areas.

The restricted means of transportation are back. They ply these restricted routes though not in large numbers as before. While some have hailed the restriction, it is bad news for commuters, as the few available buses and cabs have capitalised on the scarcity of public transportation by hiking transport fares to as much as a 100 percent. This has led to increase in the number of stranded commuters at bus stops.

A visit by The Guardian to some areas like Ilupeju, Surulere, Lagos Island and Yaba showed that the restriction was effective during the day time but not at night. Some parts of the Oshodi-Apapa Expressway and Ikorodu Road, into Ikorodu Town have not observed the ban. One of the commercial motorcyclists, who spoke with The Guardian on the condition of anonymity, said the police were only using the situation to extort from them.

“The have no intention of enforcing the ban. They want to obtain money from us. Before, we used to pay them N500 but now. they have increased it to N1,000.”

In Surulere where the ban is effective, many people have converted their private cars to commercial, charging N100 for distances that used to be N50. “The worst part is how they squeeze people like sardines, carrying four people at the back and two in front, so they can make maximum profit,” an aggrieved passenger said.

However, the driver, who identified himself as Lekan Moruff, said it was not his fault, as the touts were billing them almost N2,500 daily on all kinds of flimsy charge.

“Tricyclists used to pay about N1, 500 daily when they were plying these routes, but miscreants (agbero) said we were carrying more people and inflated their daily charges. We had to double the transport fare and carry more people because we have to make profit as well,” he said.

These buses and taxis are, however, not enough as The Guardian observed. Bus stops and parks are usually filled with stranded commuters waiting for non-available vehicles. The traffic situation isn’t any better with the ban as road users are stranded and keep waiting for endless hours. This is after the state government promised to add 550 new buses and 14 ferries to cushion the effects of the ban, a promise that Lagos commuters are yet to feel.

Speaking with The Guardian at the Ikorodu BRT Terminal, Precious Omoyemi was very bitter. “I have been on queue for almost two hours. That is how it is everyday. The buses are few and hardly come. I am yet to see the buses that they said would be added, talk less of the ferries. Besides, for someone staying in Ogijo, Mosimi and the likes, the ferries are almost useless. Motorcyclists really helped us meet up with our daily responsibilities. Commercial buses (danfo) are worse than tricycles and motorcycles, which they said had constituted a menace. The buses are rickety and the drivers drive as if they have mental challenges.”

Kafilat Kehinde, a resident of FESTAC Town in Lagos told The Guardian that the restriction was still effective but “in areas like Mile 2 and Okokomaiko, they still ply the highways, especially at night. She said one could find dozens of motorcyclists on the roads hustling for passengers.

Nyma Ibrahim, a student and resident of Powerline in Ejigbo said government should have provided alternatives for them before banning them because it has caused unemployment for some of them. “The first week the ban was very effective, the first day the ban took effect, that day I was going somewhere and was late already but couldn’t get an okada. I think in my area they are not really affected because they only operate in streets and police doesn’t stop or arrest them. The government should have provided those affected by the ban with alternatives as most of these people are educated, even students are among them and the work is what they use to put food on the table and settle bills. The ban has actually affected lots of them and rendered most of them jobless.”

Olalekan Ridwan a resident of Alimosho Local government said, “Even after the ban the price is still the same because tricycles and motorcycles still operate around here. It was when the ban first took effect that they were afraid but now they ply the road to Ojo freely. But in places like Iyana-iba and Mile 2, the transport fare has doubled because of the traffic around that axis.”

Olamilekan Yusuf, a clerk in Lagos Island claimed that the ban is still very effective on the Island but the cost of transportation has doubled. “Here on Island, the ban is still very effective, because motorcycles and tricycles only operate inside inner streets but are not plying the highways. However, this has caused an increase in transport fares because the places where tricycles will take you to for N50, the buses will take you there for N100. But at night they ply the major roads but with caution because of the police. They give themselves signs if they sight policemen on a particular route they are not suppose to ply, and they quickly disappear till the police move on,” he said.

Bisola Raheem, a resident of Ilasamaja said: “Since the restriction began, the cost of transport has gone up. Last week, the fare to Idumota that used to be N150 was increased to N200. Even when I got to Idumota, the market women told me the ban forced them to close earlier than they usually do. Those marwa and okada riders are young boys and most of them don’t have alternative jobs. It is from riding they get money to feed themselves but since they’ve been banned, some have been hanging around aimlessly looking for people and shops to rob. Before we close by midnight or 1am but now we have to close by 9pm.”

An I.C.T specialist, who spoke under the condition of anonymity said he is pleased the ban is still effective around Ilupeju because all the motorcycles that used to ply the roads are nowhere to be found. “People who use motorcycles as alternative transportation do not care about their own safety; Lagos needs more motors and trains for transport and not motorcycles. Traffic in Lagos is mostly caused by bad roads, bad vehicles on the road or accidents. The government is just doing their best to ensure that people are safe. Though it has rendered some of them jobless, they should go and get buses to drive or find alternative means of earning a living. However, I must confess that people are now taking advantage to hike transport fares as buses we board for N100 is now N200. I go from Ilupeju to mile 2 and in the morning you’ll board the bus for N100 but in the evening it doubles to N200 and if you can’t afford it, that simply means you will have to trek to wherever you are going.”

A good number of the affected operators have found their way to the outskirts like Sango, Ikorodu, Alimosho, Iba and others, thereby, increasing their number in those places.

Taiwo Kosiobameji told The Guardian when she visited her mother in Sango, “everywhere was busy. There were many commercial motorcyclists but very few passengers. It’s obvious many of them came here to work. They are looking for passengers yet we are suffering in Lagos. The government should ban only motorcyclists but reinstate tricycles and there should be strict guidelines to control their operations. Government alone cannot handle transportation business and even the number of commercial buses available are not enough, truth be told. If they were, people wouldn’t be struggling to go from one place to another, as is happening now,” she said.

Adebayo Ayinde Minna   The kidnapped students and staff of Government Science College Kagara have finally regained freedom from the armed bandits in Niger State. A top security source involved in the counter-kidnapping operation in the State told The PUNCH. The PUNCH had reported the END_OF_DOCUMENT_TOKEN_TO_BE_REPLACED

Afeez Hanafi At least six children have been declared missing in Idi Araba, Mushin Local Government Area of Lagos State, as concerns over the safety of kids in the community grow on a daily basis. The missing children are identified as Abdullahi Mohammed, Umairah Umar, END_OF_DOCUMENT_TOKEN_TO_BE_REPLACED

The Central Bank of Nigeria has acknowledged the Vice President, Professor Yemi Osinbajo, SAN, for his counsel in support of the regulation of digital currencies which has sparked some controversies among Nigerians after an order from the apex bank to commercial banks to restrict cryptocurrencies END_OF_DOCUMENT_TOKEN_TO_BE_REPLACED

At least, two soldiers were killed and dozen travelers, including a newly-wed bride and her friends, were abducted in separate attacks launched by suspected insurgents along the Maiduguri/Damaturu highway on Friday. According to sources, the insurgents ambushed commercial vehicles plying the highway yesterday afternoon and END_OF_DOCUMENT_TOKEN_TO_BE_REPLACED