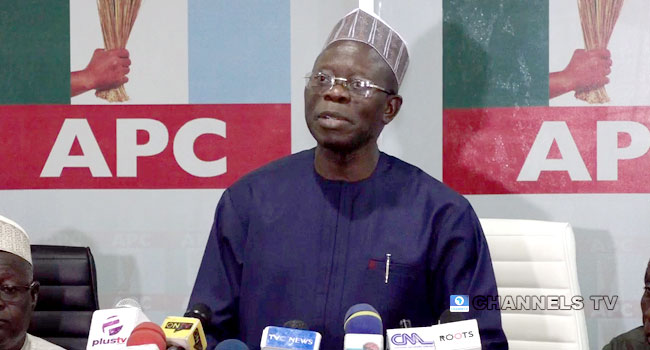 A lawyer, Andrew Emwanta has filed a complaint against a judge of the Federal High Court In Kano, Justice Lewis Allagoa, for alleged misconduct as a presiding judge.

Justice Allagoa on Thursday set aside a ruling of the FCT High Court suspending the National Chairman of the All Progressives Congress (APC), Adams Oshiomhole.

According to a petition filed by Mr Emwanta and obtained by Channels Television, the interim order by justice Allagoa was hurriedly granted in favour of the defendants in the suit, less than 24 hours after Mr Oshiomhole was stopped by an injunction from Justice Danlemi Senchi, from parading himself as the APC National Chairman.

He stated that justice Allagoa’s ruling has inflicted a transitional crisis in the National Headquarters of the APC.

Below is the petition filed by Mr Emwanta:

A woman was attacked while jogging on the Lekki-Ikoyi link bridge early on Monday morning, Jan 18 The woman named Sike was left with a bruised face, broken finger, and a gash on her thigh. Her sister said she was mugged and rough-handled. Unfortunately, as END_OF_DOCUMENT_TOKEN_TO_BE_REPLACED

Hindi Livinus, Yola ONE week after the police in Adamawa State detained two Pentecostal pastors in connection with alleged infidelity leading to bearing of two children, another female evangelist, Kwanye Tumba, has dragged the Pastor of House Chapel in Karewa, Yola North LGA of the END_OF_DOCUMENT_TOKEN_TO_BE_REPLACED

By Betsy Klein, CNN (CNN)Tiffany Trump, the youngest daughter of President Donald Trump, announced her engagement to Nigerian, Michael Boulos Tuesday. Her happy news — which happened at the White House — comes on her father’s final full day in office. “It has been an honor END_OF_DOCUMENT_TOKEN_TO_BE_REPLACED

The Federal Government on Tuesday said about 24.3 million poor Nigerians would get N5,000 each for a period of six months. Minister of Humanitarian Affairs, Disaster Management and Social Development, Sadiya Farouq, disclosed this at the inauguration of the Federal Government’s emergency intervention database for END_OF_DOCUMENT_TOKEN_TO_BE_REPLACED