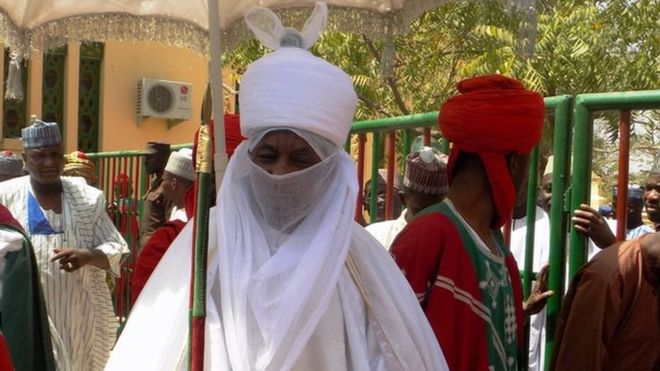 In an exparte order granted by Justice Lewis Allago on Friday, the court instructed the state anti-corruption commission and its chairman, Barr. Muhuyi Magaji, Attorney General and Commissioner of Justice of Kano state and Governor Abdullahi Umar Ganduje to maintenance status quo pending the hearing and determination of the substantive motion.

The court also directed suspension of any attempt by the commission or anyone acting on its behalf pending the hearing on 18th March 2020.

The state Anti-Corruption agency on Thursday said it began a fresh investigation of Emir Sanusi for an alleged illegal sales of landed property.

The commission also invited him to appear before it on Monday 9th of March, 2020, to clear himself of the allegation.

The commission’s investigation came two days after the state house of assembly directed the house committee on public petition to also investigate petition filed against the monarch.

The commission had earlier submitted a report to Kano state government recommending the suspension of the emir. It, however, said the fresh investigation has nothing to do with alleged mismanagement of N3.4bn by the Emirate Council.

At least, five soldiers were reportedly killed by Boko Haram insurgents on Tuesday in Ajiri community, Mafa Local Government Area of Borno State. The incident happened after the visit of the acting governor of the state, Usman Kadafur. A reliable military source disclosed that the END_OF_DOCUMENT_TOKEN_TO_BE_REPLACED

After nearly two months in captivity, students abducted from the Federal College of Forestry Mechanisation, Afaka in Igabi Local Government Area of Kaduna State, regained freedom. Daily Trust reported how 27 students of the 37 abducted from their school dormitories were freed on Wednesday. Their END_OF_DOCUMENT_TOKEN_TO_BE_REPLACED