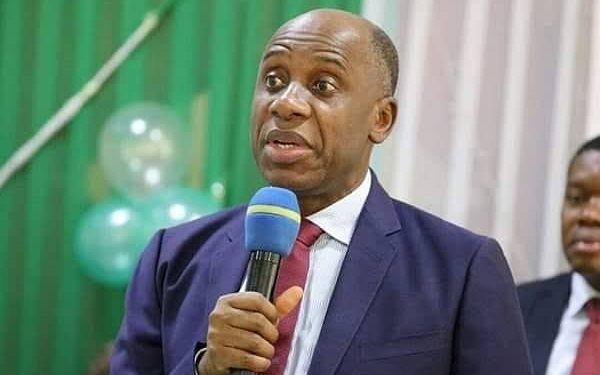 The Minister of Transportation, Rotimi Amaechi has said he is unaware of the alleged sack of the Director-General (DG) of the Nigerian Maritime Administration and Safety Agency (NIMASA), Dakuku Peterside.

There was an unconfirmed report that President Muhammadu Buhari approved the appointment of Bashir Jamoh as the new DG of the agency.

Jamoh is the executive director of administration and finance in NIMASA.

Our correspondent monitored a morning show on television on Thursday where the Minister of Transportation reacted to the news of the sack.

On the alleged sack of Peterside and his replacement by Jamoh, Amaechi said: “I am not aware. As of yesterday when I spoke to the DG of NIMASA, he was in the office and they had a board meeting and he was present at the meeting. I am not aware that he has been removed. I spoke to him at about 3 pm to 4 pm. I should know if he has been sacked. If I am the minister of transportation, I should know.

“Maybe we need to call him (Peterside) this morning to know whether he is in the office but the government does not take an arbitrary decision. If he were to be sacked, the minister of transportation would be told to formally intimate the DG of his sack and I am not aware that the president has directed me to intimate anybody of his sack.

“His tenure expires on the 10th of this month. When it expires, you can then approach the president to either reappoint him or replace him. The president has the appointing authority. All the minister has by law is the recommendation authority.”

On the speculation that his alleged sack might be due to the failure of the agency to audit its account for six years, the minister said: “I am not aware that that could be the reason. He has been DG for only four years because he came into office in 2016 and they cannot be punishing him for the offence committed by previous DGs.

Yusuf Alli, Abuja  THE Economic and Financial Crimes Commission  (EFCC) yesterday quizzed the Speaker of the Ondo State House of Assembly, Mr. Bamidele Oleyelogun, over his involvement in an alleged N2.4million fraud. A source said: “The commission had received a petition accusing the Speaker of being END_OF_DOCUMENT_TOKEN_TO_BE_REPLACED

A 31-year-old woman has confessed on how her boyfriend made to sell her only child for N300,000 to a buyer in Imo State. According to the woman, Titilayo Kudaisi, her boyfriend, Seyi Akinsete whom she met four months had been into the business of stealing END_OF_DOCUMENT_TOKEN_TO_BE_REPLACED

Police say the houseboy received information that his employer had a lot of money at home ByAgency Report The police in Ondo State on Thursday paraded one Emmanuel Akpan, a houseboy, with his accomplice, Goodness Ekpe, for allegedly killing his employer, Febisola Adebayo. Bolaji Salami, commissioner of END_OF_DOCUMENT_TOKEN_TO_BE_REPLACED

Pfizer confirms fake vaccine shots on sale in two countries × Vials of the Pfizer-BioNTech COVID-19 vaccine are pictured at the Sheba Medical Center, Israel. Photo: AFP Fake doses of the Pfizer coronavirus vaccine were being sold in Mexico and Poland for as much as END_OF_DOCUMENT_TOKEN_TO_BE_REPLACED