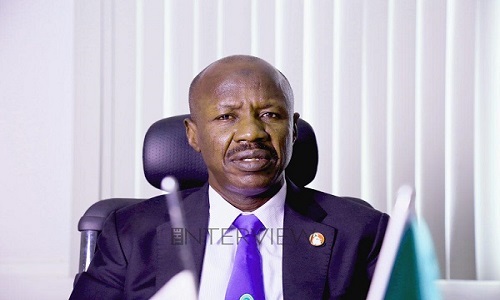 The Federal Bureau of Investigations (FBI) on Tuesday gave award of excellence to the Acting Chairman of the Economic and Financial Crimes Commission (EFCC), Mr. Ibrahim Magu and 15 top detectives of the agency.

The award was for the acknowledgment for Magu’s  unique role in the joint field operation with the FBI codenamed, “Operation Rewired”.

The operation was aimed at tackling the menace of cybercrimes.

The FBI legal attaché, Uche Ahamdi who presented the award during a visit to the EFCC Headquarters, Jabi, Abuja, commended Magu’s leadership as well as the commission over the collaboration in the fight against corruption.

A statement by the Acting Head of Media and Publicity of EFCC, Mr. Tony Orilade, said the FBI Legal Attaché, Uche Ahamdi, who presented the award during a visit to the EFCC Headquarters in Abuja, commended Magu’s leadership and the commission for the collaboration in the fight against corruption.

Ahamdi said:  “After a long race and crossing a certain finished line, we look back and see how far we have gone, and then come back together to say thank you very much for all your support in tackling the Business Email Compromise (BEC) menace across the world, not just in Nigeria, but across the world.”

“The EFCC under Magu has put in place efficient working collaboration leading to the arrest and prosecution of the perpetrators of BEC across the globe.”

He restated  the need for more collaboration between the FBI and the EFCC. He said the FBI was “immensely pleased” with the assistance rendered by the Commission.

“We have come to present a few token of our appreciation in the form of citation and certificates from the FBI to the operatives who handled part of the BEC rewired operation,” Ahamdi added.

Responding, Magu appreciated the FBI for deeming it fit to consider him and his team worthy for the award of excellence, and gave assurances of the Commission’s readiness to continue partnering with the FBI.

According to the anti-graft czar, the exchange of intelligence with the FBI helped the commission in winning the fight against cyber-crime.

He said the working relationship with the FBI was necessary “because corruption is a borderless crime”.

Nigerian serial fraudster, Ramon Abass, popularly known as Hushpuppi, has agreed to plead guilty to the money laundering charge against him. Hushpuppi, who is known for his luxury lifestyle, was arrested in the UAE in June 2020 alongside 11 of his associates over allegations bordering END_OF_DOCUMENT_TOKEN_TO_BE_REPLACED

The United Kingdom Parliament has said Nigerians under President Muhammadu Buhari administration are at the mercy of non-state actors who unleash attacks on individuals and communities at will. Members of the House of Lords, the upper chamber of the parliament; Caroline Cox, Rowan Williams, David END_OF_DOCUMENT_TOKEN_TO_BE_REPLACED

Some unknown gunmen, believed to be bandits, have killed the All Progressives Congress (APC) chairmanship candidate for the Kachia Local Government Area of Kaduna State, Alamkah Dominic Usman. The APC leader was shot dead along Keffi-Akwanga road in Nassarawa State on his way to Benue END_OF_DOCUMENT_TOKEN_TO_BE_REPLACED

Daud Olatunji   Men of the Ogun State Police Command have arrested an ex-convict, Jamiu Malomo, for allegedly killing a suspected sex worker, Azeezat Akande, 28. The incident occurred at Ilupeju community, Oke-Aregba, Abeokuta, after the 18-year-old suspect had sex with the victim. The state END_OF_DOCUMENT_TOKEN_TO_BE_REPLACED

Tokyo Olympics 2020 Nigeria’s quest on winning medals at 2020 Tokyo Olympic Games has suffered a huge setback as ten of the country’s athletes are ineligible to compete at the start of the track and field events on Friday in Japan. According to the statement from the END_OF_DOCUMENT_TOKEN_TO_BE_REPLACED