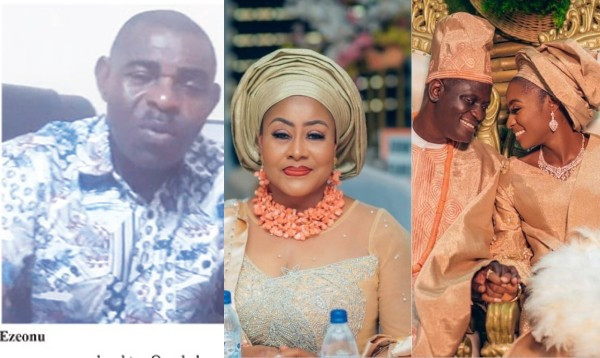 Edwin Ezeonu, the ex-husband of Nollywood actress Ngozi Ezeonu has accused her of marrying off their daughter without his consent.

In an interview with The Sun’s ‘Inside Nollywood’, Edwin accused his ex-wife of trampling on his right and honour as a man.

He described his daughter’s traditional wedding in Delta State as an abomination as he was kept in the dark throughout the whole process.

The aggrieved ex-husband of the Nollywood actress said;

“I’m a real son of the soil in Igboland and I am knowledgeable enough about Igbo traditional marriage. In Anambra State where I come from, a woman does not and has no right whatsoever to give out a fellow woman’s hand in marriage. It is abomination and taboo. As such, Ngozi Denis Ikpelue has no legitimate right and authority to give out my daughter, Ogechukwu’s hand in marriage. As long as I am concerned and also the entire family of Ezeonu and his kindred are concerned, Ogechukwu is not married. What happened in Asaba, Delta State on February 15, 2020 was a movie shoot!”

Recalling how his marriage to Ngozi Ezeonu crashed in 2013, Edwin said;

“I came back home one day from work and met an empty house, without any prior notice. As I got home that fateful day, my landlady told me that Ngozi had packed out of the house, taking the children along with her. Few weeks before that, I had insinuated that she was putting up a new apartment. I summoned her and warned her against dividing the family. But she never listened.

“I gave Ngozi all the supports and encouragements she needed to boost her career as a seasoned actress, yet she never valued all my efforts. She also never contributed a dime to the upkeep of the house and wellbeing of the children. Even after they left, I still catered for my kids: school fees, foodstuff and all. I’m devastated that my only daughter would do this to me. Ngozi should also desist from using my surname. We are divorced.”

Abiodun Nejo Cases of kidnapping are becoming worrying in the South-West with kidnappers having a field day in Ekiti State. It’s a miraculous story for one of the kidnap victims, sixty-three-year-old retiree, Mr Taiwo Davies, who spent about a week in the den of kidnappers END_OF_DOCUMENT_TOKEN_TO_BE_REPLACED

Abiodun Nejo, Ado Ekiti The Speaker, Ekiti State House of Assembly, Funminiyi Afuye, said on Friday that he was not aware of any meeting of the speakers in the South-West geopolitical zone where they expressed their support for the rumoured 2023 presidential ambition of former END_OF_DOCUMENT_TOKEN_TO_BE_REPLACED

Passengers of Azman Air on Friday evening unleashed anger on officials of the Kano based airline over flight cancellation at Mallam Aminu Kano International Airport, leaving a female staff collapsed and others with injuries. Confusion ensued at the departure lodge of the domestic wing when END_OF_DOCUMENT_TOKEN_TO_BE_REPLACED

Drama As President Buhari’s Minister, Amaechi Seen With Crutches At Airport By Wisdom Nwedene There was mild drama and confusion on Saturday when President Muhammadu Buhari’s Minister, Rotimi Amaechi arrived with crutches at the airport for an event. Sources disclose that Senate President, Ahmed Lawan END_OF_DOCUMENT_TOKEN_TO_BE_REPLACED

Jihadists aligned with the Islamic State militant group have captured a military base in northeast Nigeria’s Borno state after overnight clashes with troops, sources told AFP on Saturday. Machine-gun wielding fighters from Islamic State West Africa Province (ISWAP) attacked the base in the town of END_OF_DOCUMENT_TOKEN_TO_BE_REPLACED