In furtherance to the placing of the patient of the Coronavirus disease, a 44-year-old Italian, in a quarantine centre, Lagos and Ogun state governments have identified at least 100 persons who had contact with the index case of the disease in the country.

Subsequently, the contacts are being followed up as a precautionary measure against the spread of the virus in the states and the country at large.

Nigeria had been spared of the coronavirus outbreak, which was first recorded in Wuhan, China, until it was detected on Thursday on an Italian businessman aboard a Turkish Airlines flight arrived at the Murtala Muhammed International Airport, Lagos from Milan, Italy, having transited through Istanbul, Turkey.

The victim arrived in Lagos on Monday night and was said to have spent the night in a hotel around the airport area before leaving for business in Ogun State on Tuesday morning.

He was said to have fallen ill, after which he tested positive for the virus. He was thereafter taken to the Infectious Disease Hospital in Yaba, Lagos.

However, authorities said the patient was clinically stable.

Speaking on Saturday, the Lagos State Commissioner for Health, Prof Akin Abayomi, said the patient was clinically stable and had no signs of respiratory symptoms which could make his infection contagious.

Abayomi also said over 100 contacts with the Coronavirus index case had been identified and followed up.

In an interview with Channels TV, which was monitored by one of our correspondents, the commissioner stated this at the Emergency Operation Centre at the Mainland Hospital in Yaba, where the patient was being quarantined.

“By Saturday, his symptoms had subsided. He hasn’t developed any respiratory symptoms and we are quite happy about that because if he has respiratory symptoms like coughing and sneezing, which makes the disease more contagious,” Abayomi said, adding that the 100 persons the Italian had contact with were being jointly monitored by Lagos and Ogun states.

Earlier in an interview with Arise TV, which was monitored by one of our correspondents, Abayomi said the authorities had identified the hotel room where the Italian patient lodged on Monday night. 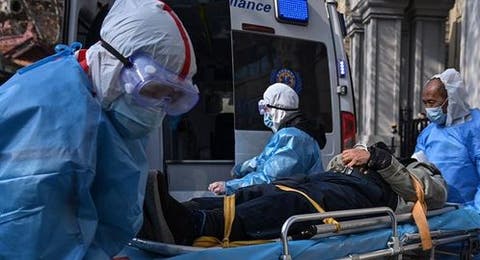 “We’re going there this morning (Saturday) to decontaminate the room and the entire hotel. We will identify all the people who had contact with him in the hotel,” he said.

As part of measures to stop the spread of the disease in Plateau State, the state government said on Saturday that it had quarantined three Chinese citizens.

It said that the Chinese were quarantined in Wase town for suspected case of the virus.

The state Commissioner for Information, Dan Manjang, disclosed this to Channels Television.

The report noted that the Chinese, who are workers in a mining site in Wase, flew into Abuja on Wednesday.

Manhang said, “The situation right now is that they have been isolated. The three of them came in through Abuja and once we heard that, the Commissioner for Health had to take a proactive measure to send a medical team to Wase to investigate.”

The commissioner was also quoted to have said that the quarantined Chinese nationals made their way to Jos, the Plateau State capital, on Thursday, adding that they were being clinically examined by a medical expert deployed by the state Ministry of Health.

However, he said there was no confirmed case of the virus in the state, and that people should remain calm.

He said, “The problem that we have is that there is a tendency for people to think that investigation or quarantine, as the case may be, means that there is an outbreak of the virus.

“As far as Plateau case is concerned, there has been no known case of this virus on the Plateau; we just took proactive measures to make sure that we place them (the Chinese nationals) under investigation and that will take 14 days.”

The government, according to the commissioner, awaits the report of the team that was sent to Wase before taking the next step.

Also, five foreigners who arrived at Margaret Ekpo International Airport in Calabar, Cross River State, on Friday have been placed under observation following the detection of a carrier of the virus in Lagos.

The state Commissioner for Health, Dr Beta Edu, on Saturday said, “We profiled five foreigners who came in from locations that have recorded the virus and they came in through Lagos that morning (Friday).

“We got their biodata and asked them to self-isolate. And of course we gave them the thermometer and got their contacts. We have been following up with them. None of them has shown any symptom so far. Two of the foreigners are from Europe, one from India and two from China.”

She said sensitisation was being carried out and all entry points into the state were being manned by health workers to detect and prevent the spread of the virus in the state.

She added, “Our isolation centre is ready and protocols have been sent to all health workers.

“Special protective equipment have been sent to all health workers, the army, paramilitary agencies and private practitioners across the state,” she said.

Meanwhile, following Saturday PUNCH’s exclusive report that exposed the poor state of the Mainland Hospital, Yaba, Lagos (formerly Infectious Diseases Hospital), the state government said on Saturday that it had moved the Coronavirus patient to a better facility that would make him comfortable.

The report, published on Saturday, pointed out that the patient was angry and had attempted to escape due to the state of the isolation centre.

A health worker at the hospital told Saturday PUNCH on the condition of anonymity on Friday that the patient had been very upset about the surroundings as he “complained of excessive heat and mosquitoes.”

The source decried the “very poor quality” of the isolation centre, lamenting that “the authorities have not matched words with action.”

“There is nothing there (inside the isolation ward) aside from bed and hospital locker. He almost ran away and is still threatening to do that,” adding that the level of preparedness in Lagos State for infectious diseases such as Coronavirus and Lassa fever “is zero.”

The report was in contrast to the earlier claim by the Lagos State Deputy Governor, Dr Obafemi Hamzat, who said on Friday on a programme on Television Continental that the state government had built a facility to handle the situation and that the patient was getting better.

Hamzat had said, “It is a lab that can accommodate 100 for now, but it is only one bed that is occupied today. Hopefully, it wouldn’t spread. We are ready and we are well equipped. He (the patient) is there and he is getting better. He is steady. The doctors say he is going to be fine.’’

But, following the Saturday PUNCH report that showed the true state of the facility against government’s claims, the state Commissioner for Health, Prof Akin Abayomi, who had in a tweet on his page earlier in the day referred to the Saturday PUNCH report as fake news, admitted on Arise TV when he appeared as a guest on a programme that the patient indeed complained about discomfort but that he had been moved to a better facility.

Abayomi said, “I saw him at about 6pm yesterday. He was explaining his condition and we were taking some new data from him.

“He’s in an isolation room all by himself and we had moved him into a particular room because we were doing a general overhaul of the whole facility because we want to be ready.

“There were some discomfort in terms of heat, but about 9pm we moved him over to the renovated facility which has lots of air conditioners, fans and it’s a 28-bed brand new facility, and he’s there on his own in the whole ward, and as of 6am this morning I’m told he’s comfortable.”

Nigerian serial fraudster, Ramon Abass, popularly known as Hushpuppi, has agreed to plead guilty to the money laundering charge against him. Hushpuppi, who is known for his luxury lifestyle, was arrested in the UAE in June 2020 alongside 11 of his associates over allegations bordering END_OF_DOCUMENT_TOKEN_TO_BE_REPLACED

The United Kingdom Parliament has said Nigerians under President Muhammadu Buhari administration are at the mercy of non-state actors who unleash attacks on individuals and communities at will. Members of the House of Lords, the upper chamber of the parliament; Caroline Cox, Rowan Williams, David END_OF_DOCUMENT_TOKEN_TO_BE_REPLACED

Some unknown gunmen, believed to be bandits, have killed the All Progressives Congress (APC) chairmanship candidate for the Kachia Local Government Area of Kaduna State, Alamkah Dominic Usman. The APC leader was shot dead along Keffi-Akwanga road in Nassarawa State on his way to Benue END_OF_DOCUMENT_TOKEN_TO_BE_REPLACED

Daud Olatunji   Men of the Ogun State Police Command have arrested an ex-convict, Jamiu Malomo, for allegedly killing a suspected sex worker, Azeezat Akande, 28. The incident occurred at Ilupeju community, Oke-Aregba, Abeokuta, after the 18-year-old suspect had sex with the victim. The state END_OF_DOCUMENT_TOKEN_TO_BE_REPLACED

Tokyo Olympics 2020 Nigeria’s quest on winning medals at 2020 Tokyo Olympic Games has suffered a huge setback as ten of the country’s athletes are ineligible to compete at the start of the track and field events on Friday in Japan. According to the statement from the END_OF_DOCUMENT_TOKEN_TO_BE_REPLACED