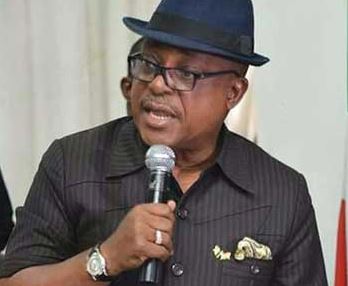 THE national chairman of the People’s Democratic Party (PDP), Prince Uche Secondus, appears to be in the eye of the storm ahead of the 2023 elections.

His position is under threat following  agitation to replace him with a Northern to pave the way for emergence of a Southerner as the party’s presidential flag bearer in that election.

Secondus was elected national chairman   on   December 10, 2017after a keenly contested election at the Eagles Square, Abuja.

Signs of opposition to Secondus’ continued stay in office by some prominent party members has been growing for some time now.

Some members say they don’t even know where Secondus and his team stand on the issue of zoning of the party’s presidential ticket for the 2023 elections.

Secondus and members of his National Working Committee (NWC) are due to complete their term in office before the next general election.

Amidst indications that the Rivers State-born politician may have angered some of his strongest supporters over his handling of certain issues since the emergence of former Vice President Atiku Abubakar as the presidential candidate of the party for the 2019 general elections, a new twist has been introduced to the power game in the PDP following the decision of some prominent party chieftains from the North to demand that a Northerner must be made the national chairman of the party if the South is desirous of producing the next presidential candidate of the PDP.

Reliable party sources told The Nation that    zoning is generating fierce debates in the PDP   . While the majority of PDP leaders from the South   insist that an unwritten zoning arrangement being followed by the party since 1999 makes it mandatory for the next presidential candidate to come from the south, a number of northern party chieftains are of the opinion that the party should avoid zoning the ticket to any region so as to allow it presents its being candidate in its quest to defeat the ruling All Progressives Congress (APC).

This is just as some powerful individuals and groups within the party are working round the clock to ensure that Atiku is returned as the 2023 presidential flag-bearer of the opposition party.

As the battle rages, Secondus is largely seen as non-committal to the zoning arrangement. For this reason, pro-zoning agitators are said to be considering moving against him and forcing his ouster as the national chairman of the PDP as part of efforts to ensure that an aspirant from the southern part of the country emerges as presidential candidate in 2023.

Some chieftains of the party are said to be pushing for the re-zoning of the position of national chairman to the north to make it easier for the south pick the 2023 presidential ticket. The Nation gathered that the development followed a parley between a group of party leaders favourably disposed to the emergence of a southerner as presidential candidate in 2023 and some northern PDP stakeholders in Abuja during the week.

A source said: “It is absolutely wrong to say northern PDP leaders are against the zoning arrangement or are opposed to the party producing a southerner as presidential candidate.

“The PDP is a unique party and as you can see over the years, we adhere strictly to zoning. The south should be allowed to produce the next presidential candidate. What we are saying however is that the north should also be considered fort the leadership of the NWC as a way of balancing the equation properly.

Speaking further, the source who is one of the longest serving national legislator from the North Central revealed that some  northern PDP leaders, having  observed the possibility of a serious crisis within the party over the zoning debate, and following series of meeting with pro-zoning party chieftains and groups from the south, have resolved to start a fresh agitation for the position of the national chairman of the PDP to be returned to the north during the next convention of the party. According to him, the implication is that Secondus will be denied a second term in office.

“This has nothing to do with his performance as our national chairman. Rather, it has to do with our decision to prevent the PDP from sliding into another internal crisis that will destroy our chances of returning to the presidency in 2023,” he said.

“We have examined the issues and we have come to the realization that if we listen to ourselves and return to the ways of our founding fathers, there is no issue we cannot resolve. The zoning issue is not just about the presidency as far as PDP is concerned. We usually use zoning to balance power in the party since 199.

“Once we all agree on this, it will not be difficult for us all to agree to the fact that the zoning formula makes it mandatory for the south to grab the presidential ticket.”

Confirming the development, a member of the party’s Board of Trustees (BoT) from Oyo state, said there has been a number of meetings between various groups concerning the zoning debate. He confirmed that not all northern chieftains of the party are opposed to zoning. The former NWC member of the PDP said a group from the north recently announced its readiness to back the south for the 2023 presidential ticket “in exchange for the position of national chairman which they insisted, must be ceded to one of the zones in the north.”

“And for us in the Rebirth Group, we don’t see anything wrong in their demand. If you go back to 1999, you will see that the positions of presidential candidate and national chairman have always been shared between the north and the south. So, since it is our desire to produce the presidential candidate and we want them to support us, we will definitely support them too when they come to the convention to ask that the national chairmanship be given to them. I am sure Secondus too will not mind such an arrangement as a loyal party man,’ he added.

The Nation also gathered that more party chieftains are being consulted by various groups and stakeholders on the new development. It was also gathered that the camp of Prince Secondus is currently working on how best to counter the moves that may see him being denied another shot at the chairmanship of the opposition party. When asked about the development, an aide of the PDP boss who claimed anonymity said “it is all politics. There is no rule that says a zone cannot produce chairman and presidential candidate at the same time. We understand these moves and we are not sleeping at all.”

The Cour De’appal De Cotonou, Benin Republic, on Monday, granted embattled Yoruba Nation agitator Sunday Adeyemo aka Sunday Igboho access to medical care, The PUNCH has learnt. This was after court sessions which lasted for more than eight hours. Igboho’s lawyers battled to secure bail for the END_OF_DOCUMENT_TOKEN_TO_BE_REPLACED

At least 50 travellers have been abducted in Sokoto State by armed bandits, a witness has said. An official of the Sokoto government confirmed the abductions but did jot state the number of victims. The victims were travelling on Sokoto-Gusau road on Sunday when they END_OF_DOCUMENT_TOKEN_TO_BE_REPLACED

By Rasaq Ibrahim, Ado-Ekiti   An eminent lawyer, Aare Afe Babalola (SAN), has cautioned Kwara State Governor Abdurahman AbdulRazaq against reviewing the Supreme Court judgment on the land dispute involving Offa and Erin-Ile. He said the governor lacked the power to undertake such action, adding that END_OF_DOCUMENT_TOKEN_TO_BE_REPLACED