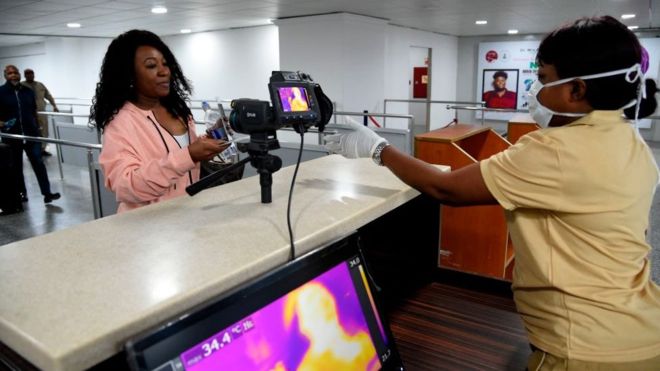 Following the confirmation of the first case of Coronavirus in the country late Thursday/early yesterday, the Federal Government has appealled to Nigerians not to panic, assuring that it is well-equipped to detect and handle any possible case or cases of the disease.

Minister of Information and Culture, Alhaji Lai Mohammed, who made the appeal, yesterday, in Abuja, urged Nigerians not to fall for the antics of purveyors of fakes news and disinformation, adding that government was working with Facebook to bring down any misleading information.

He said: “We know that at times like this, purveyors of fake news and disinformation usually ramp up their acts. Facebook has asked Nigerians to report any false or misleading report on Facebook and Instagram pages, so they can immediately bring them down.

“They have also assured us that they are taking preemptive action to remove any false or harmful messages about this epidemic and public health in Nigeria 24/7.

“All that Nigerians are required to do is to flag any false or misleading report on the epidemic and Facebook will remove any such report. With Coronavirus now in Nigeria, the Federal Ministry of Information and Culture is intensifying its public sensitisation and enlightenment campaign on the disease.”

Mohammed noted that media agencies of the ministry had been directed to intensify ongoing sensitisation and enlightenment campaign to arm Nigerians with the necessary information to stay well, observing that the National Orientation Agency (NOA), with its wide reach in all the 774 local governments, was pushing the various sensitisation/enlightenment programmes to all parts of the country, translating the campaign to the major indigenous languages to expand their reach.

In the same vein, the Federal Government has insisted that the first confirmed case of coronavirus in the country was not caused by screening failure at the airport, just as it said it would not place restriction on international flights and travels into and out of the country.

The government stated that contact tracing and necessary measures have been put in place to prevent the spread of the deadly disease.

Meanwhile, the Federal Airports Authority of Nigeria (FAAN), yesterday, urged passengers, airlines and the general public at the Murtala Mohammed International Airport (MMIA), Lagos not to entertain any fear during the emergency simulation exercise.

Its General Manager in charge of Corporate Affairs, Mrs. Henrietta Yakubu, in a statement explained that the exercise was an operational requirement of the International Civil Aviation Organisation (ICAO) for aerodrome.

A yet to be identified Italian working in Nigeria, who returned from Milan, Italy, on February 25, was confirmed to be positive by the Virology Laboratory of the Lagos University Teaching Hospital (LUTH), part of the Laboratory Network of the Nigeria Centre for Disease Control (NCDC).

According to the Minister of Health, Dr. Osagie Ehanire, at a press conference, yesterday, to give update on the first confirmed case, said the carrier was properly screened at the airport, but had no symptom(s) as at that time, adding that such scenario is not peculiar to Nigeria, as many countries had seen the virus entering because the person who brought it had no symptoms at the point of screening.

Ehanire also said the identity of the patient and where he works would not be disclosed, as it against international standard, adding that government had approached the airline to obtain the contact and addresses of those the carrier had been in contact with for proper monitoring.

The minister stated that both the port air services and NCDC were being funded to curtail the virus, saying: “The man from Italy walked through the screening with no symptoms and by the time he got to his house, I think a day or two after, he started to feel unwell and wisely enough, he went to the hospital, where the doctor examined him.

“They found that malaria was negative and they know his travel history and they immediately refer him to test at LUTH testing centre and there, it was discovered that he was positive of the virus and was immediately placed on isolation.

“In fact, he had been put on isolation on the referral hospital and the special ambulance where the driver had been kitted. So, there was preemptive thinking on the part of the hospital and drivers who transported him under special condition.

“The identity of patients is not generally revealed, except with their own permission. We are not going to tell you his name is xyz. Also, the name of the company he works with cannot be released without their permission. That is not the normal practice.

“He is under strict isolation and from the information I have this morning, he is stable. The virus is new and its behaviour is not very clear. Scientists are working very hard to know more about it.

“His case is not a failure of screening, because screening went very well. As a matter of fact, we need to commend the government of Lagos State for responding very appropriately. What follows is contact tracing.

“We look at all those people who the man had been in touch with back from when he was admitted to the first point of call when he entered the country. The first point of defence is that the port air services will be working with airlines to get the passengers’ numbers. They will find out those who sat around him and set up a monitoring system for all the passengers and crewmembers of that particular airline to get further information.

“Further questioning of the patient will also reveal all where he had been to, because all we know for now is that he came from Milan and it doesn’t seem that he ever was in China.

“The WHO advises all countries that there is no need to put every single traveller into quarantine. There are several other countries doing what they like, but we follow the WHO guidelines that says we should screen all persons entering into our country, take their travel history and if they are coming from a country with high burden of coronavirus, we should invite them for further questioning.

“Our focus is on the four cities international airport. The level of preparedness of Nigeria is improving, while training of port air workers is going on. The first line of defence lies with the port air services, who sees who is entering the country and the second line of defence is the NCDC, who now responds to the suspected cases.

“The restriction of flight is not what we are doing, but we already know that several airlines are the ones restricting their flight into high burden countries by themselves. We are not the one banning any flight, because we have not seen the need.

FANN in the statement, said: “The exercise is aimed at ascertaining the level of preparedness of the airport in real life emergency situations.

“Consequently, the FAAN will like to appeal to the public, especially those residing around the airport, not to entertain any fear, as the exercise is only a mock.”

FAAN assured of its commitment to its core values of safety, security and comfort of airport users in the country.

Meanwhile, a virologist and medical laboratory scientist with the National Veterinary Research Institute Vom, Plateau State, Dr. Solomon Chollom, has called on the Federal Government to identify and quarantine other passengers who had contact with the Italian in the plane or at the airport, as the symptoms start showing after three days.

“They must be quarantined for 21 days. This is not time to be frivolous with Infection Prevention and Control (IPC) strategies, especially the use of Personal Protective Equipment (PPE) and use of alcohol-based solutions for disinfection of surfaces.

“Patients presenting with respiratory symptoms should be treated as Category A risk individuals. It is now clear that the virus is here in the country. This calls for a national health emergency first in all hospital facilities in Nigeria.”

Chollom added: “The second emergency should be in public places, such as schools, markets, worship centres and motor parks. Health awareness should immediately permeate such places to limit handshakes and undue contact with surfaces and individuals.

“People should be informed to cough into tissue papers and disposed into alcohol-based solutions.”

The laboratory scientist urged the government to immediately direct that hand sanitisers and hand wash stations be mounted public places, such as schools, motor parks, markets and worship centres, saying: “if we cannot stop international flights into Nigeria at the moment, we should be able to censor and subject immigrants to baseline medical investigations and quarantine those with high possibilities of carrying the virus.

Yusuf Alli, Abuja  THE Economic and Financial Crimes Commission  (EFCC) yesterday quizzed the Speaker of the Ondo State House of Assembly, Mr. Bamidele Oleyelogun, over his involvement in an alleged N2.4million fraud. A source said: “The commission had received a petition accusing the Speaker of being END_OF_DOCUMENT_TOKEN_TO_BE_REPLACED

A 31-year-old woman has confessed on how her boyfriend made to sell her only child for N300,000 to a buyer in Imo State. According to the woman, Titilayo Kudaisi, her boyfriend, Seyi Akinsete whom she met four months had been into the business of stealing END_OF_DOCUMENT_TOKEN_TO_BE_REPLACED

Police say the houseboy received information that his employer had a lot of money at home ByAgency Report The police in Ondo State on Thursday paraded one Emmanuel Akpan, a houseboy, with his accomplice, Goodness Ekpe, for allegedly killing his employer, Febisola Adebayo. Bolaji Salami, commissioner of END_OF_DOCUMENT_TOKEN_TO_BE_REPLACED

Pfizer confirms fake vaccine shots on sale in two countries × Vials of the Pfizer-BioNTech COVID-19 vaccine are pictured at the Sheba Medical Center, Israel. Photo: AFP Fake doses of the Pfizer coronavirus vaccine were being sold in Mexico and Poland for as much as END_OF_DOCUMENT_TOKEN_TO_BE_REPLACED