says no going back on Ihedioha

The Peoples Democratic Party may have abandoned plans to seek a review  of  the Supreme Court judgment  dismissing  its case against the election of the President, Major General Muhammadu Buhari (retd.

The PDP and its presidential candidate Atiku Abubakar challenged the Independent  National Electoral Commission’s declaration of Buhari of  the All Progressives Congress  as the winner of the 2019 presidential election.

The former ruling party lost its case at the  Presidential Election Petitions Tribunal, and also lost at the Supreme Court.

But the party indicated on Monday that  it would approach the apex court  to review its judgment.

Sources close to the leadership of the party said there was pressure on the party  to forget the plans due to what they described ‘‘as the need to respect the sanctity of the Supreme Court.’’

Also, it was learnt that the decision of the party was fuelled by the manner the apex court treated the appeal filed by the APC  for the  court to review its judgment on  the  Bayelsa State governorship poll.

The Supreme Court stopped David Lyon of the APC from being inaugurated as Bayelsa State governor,  along with Biobarakuma Degi-Eremienyo, on the eve of his inauguration  after the deputy governor-elect  submitted forged  certificates to the INEC.

Douye Diri of the PDP, who came second in the November 16, 2019 election, became governor.

But Lyon and his party approached the Supreme Court to reverse its judgment.

The National Publicity Secretary of the PDP, Mr Kola Ologbondiyan, who spoke at a press conference in Abuja, also called on the Supreme Court to review its judgments on the governorship elections in four stares 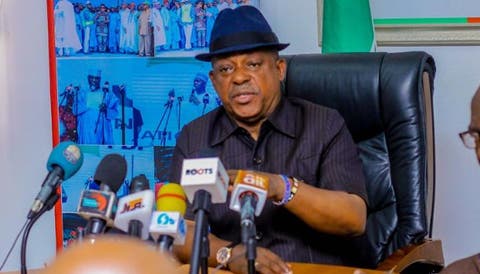 The party also demanded a review of the apex court’s judgment on the 2018 governorship election in Osun State.

Ologbondiyan also demanded a review of the Supreme Court judgment on the 2019 Kaduna State election won by  Nasir El-Rufai of the APC.

In the Katsina governorship poll  judgment, the Supreme Court upheld the Aminu Masari’s election and dismissed the appeal  filed  by Senator Yakubu  Danmarke of the PDP.

Ologbondiyan said the PDP was demanding reviews of the judgments  because of the alleged plot by the APC “to pressure the justices of the Supreme Court to upturn the judgment of Justice Mary Odili-led panel on the Bayelsa State governorship election.”

Why PDP is making a U-Turn

It was learnt that the  N60m fine  (N30m each) imposed on Chief Afe Babalola (SAN) and Chief Wole Olanipekun (SAN) by the Supreme Court for agreeing to file an application for the review of the apex court’s judgment on Bayelsa election shocked the PDP and its team of legal advisers.

Justice Amina Augie announced the fine while reading the judgment on Wednesday in the application for a review of its February 13 judgment sacking Lyon in favour  of Diri.

With tears in her eyes, the justice regretted that “very senior” lawyers were responsible for filing the application.

The apex court awarded N30m to be paid by Babalola and Olanipekun.

She said the application amounted to what she described as an invitation for the apex court to sit  on its own judgment in violation of the constitution.

A seven-man panel  led by Justice Sylvester Ngwuta described the application filed by the APC as vexatious, frivolous, and constituted a gross abuse of court process.

Justice Augie held that it would amount to violating the finality of its judgment if the application was granted.

She said granting the application would open a floodgate for the review of decisions of the Supreme Court.

“There must be an end to litigation,” she said, adding, “the decision of the Supreme Court is final for ages in a matter” and only legislation could change it.

It was learnt that senior lawyers approached by the PDP were of the opinion that, apart from the time factor, filing a fresh appeal on the decided cases would amount to an attempt at ridiculing the apex court.

It was also argued, according to sources, that the PDP as a former ruling party must not be seen to contribute to any attempt at ridiculing the judiciary.

A source close to the party said, ‘‘We are actually under pressure not to return to the apex court for the review of the cases.

‘‘We were actually pained that most of the cases were not judiciously dealt with before they were hurriedly dismissed. That’s why we decided that we should return to the same court, to ask for  reviews since we have more evidence that they were not properly examined.

‘‘But there were those who felt that we should let bygones be bygones. That’s why we are having a rethink.’’

The National Chairman of the party, Prince Uche Secondus, confirmed the development. He also said the party was also considering the ‘‘many appeals and we may actually not return to the Supreme Court on those cases.’’

He said, ‘‘The possibility of not returning to the apex court is high on those cases. We are yet to file the papers and may not likely file them. But we are talking.’’

Meanwhile, the party has said it will not withdraw its application for the review of the Supreme Court’s January 14 judgment on the Imo State governorship election.

A seven-man panel of the apex court led by the Chief Justice of Nigeria, Justice Tanko Muhammad,  in the judgment delivered by Justice Kudirat Kekere-Ekun nullified Chief Emeka Ihedioha  of the PDP’s election after  governing the state for about seven months. Hope Uzodinma  of the APC was declared as the  rightful winner of last year’s   Imo governorship election.

It arrived at this decision after it added figures from 388 polling units that had been excluded by INEC.

Dissatisfied with the judgment, the  PDP and Ihedioha  have approached the Supreme Court  seeking  a review and possibly, a reversal of the judgment.

Ologbondiyan, in an interview with one of our correspondents, said the PDP and Ihedioha were not planning to withdraw their application.

He stated that Ihedioha’s matter was different and had attracted global attention.

Secondus recently described the judgment of the apex court which voided Ihedioha’s victory after scoring 276,404 votes and declared Uzodinma, who initially scored 96, 458 votes, as governor, as highly irrational, unfounded and a provocative.

The parties to the case are expected to return to the Supreme Court on Monday when the case will be heard and probably summarily decided.

A member of the Senate, representing Osun East Senatorial District, Senator Francis Fadahunsi, yesterday, alleged that fraud was rampant within the Nigerian armed forces and some paramilitary agencies, noting that the nation would not overcome insecurity if left unchecked. The senator said the arms and END_OF_DOCUMENT_TOKEN_TO_BE_REPLACED

There was tension on Friday at the Abattoir community in the Jos South Local Government Area of Plateau State following the arrest of a Lebanese said to be using underage girls to act pornography. The man whose name was not immediately known was said to END_OF_DOCUMENT_TOKEN_TO_BE_REPLACED

There was tension on Friday at the Abattoir community in the Jos South Local Government Area of Plateau State following the arrest of a Lebanese said to be using underage girls to act pornography. The man whose name was not immediately known was said to END_OF_DOCUMENT_TOKEN_TO_BE_REPLACED

There was tension on Friday at the Abattoir community in the Jos South Local Government Area of Plateau State following the arrest of a Lebanese said to be using underage girls to act pornography. The man whose name was not immediately known was said to END_OF_DOCUMENT_TOKEN_TO_BE_REPLACED