DSS hounds journalist over report on rift between Monguno and Kyari 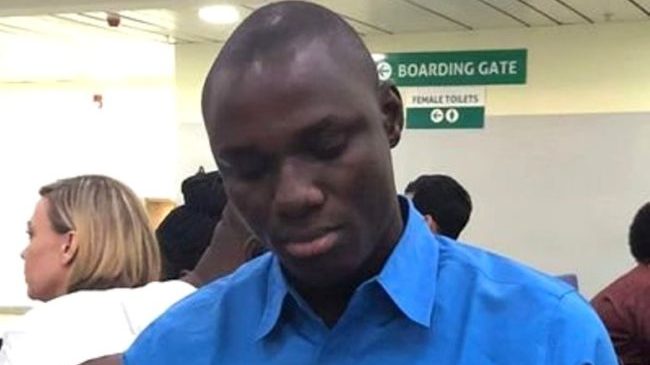 A Nigerian journalist with Premium Times is currently in hiding after the Department of State Services hounded him over a report he wrote about the rift between the National Security AdviserBabagana Monguno and President Muhammadu Buhari’s chief of staff Abba Kyari.

Samuel Ogundipe wrote a detailed report in which he exposed the simmering fight for control within Buhari’s inner circle.

He detailed how Monguno cautioned all the service chiefs against taking orders from Kyari, whom he (Monguno) accused in a memo addressed to Buhari of interfering in security matters.

“You are reminded that the Chief of Staff to the President is not a presiding head of security, neither is he sworn to an oath of defending the country,” Monguno said in the leaked memo.

Two sources told The Guardian that Ogundipe has gone into hiding since the DSS started asking him to provide the source of his information.

“His email and WhatsApp were hacked overnight by the people suspected to be DSS during the week,” one of the sources said on Saturday.

“They even went to his house in Abuja but he was not there.”

“We find it extremely disturbing that Nigerian Government through the DSS is moving to arrest Samuel Ogundipe over leaked NSA’s letter on Abba Kyari,” a civil rights organisation EiE said. “This campaign to harass, intimidate and silence journalists violates the core principles of democracy.”

The managing editor of Premium Times Idris Akinbanjo told ICIR that he was aware that the DSS was looking to arrest Ogundipe to identify the source of the memo which he cited in his report. He, however, said the journalist has not been arrested.

“We know that the DSS are desperate to identify our source for the story but we are reviewing the situation,” Akinbanjo said.

This is not the first time the Nigerian security agents will be harassing the Ogundipe to get the source of his reports.

Ogundipe spent three days in a police cell in August 2018 after publishing the details of a report sent to the then acting president Yemi Osinbajo by the then inspector general of police, Ibrahim Idris, on events that took place at the National Assembly on August 7.

The police said Ogundipe was arrested for being in possession of classified information and demanded that he named his source.

Ogundipe, after his release, said he was kept in a “fetid cage” along with persons arrested for “violent crimes”.

“I spent three days in detention. But it was enough time for me to appreciate the precarious fate of journalism in Nigeria, despite nearly two decades of uninterrupted civil rule. I felt terrible to be incarcerated and isolated and accused of crimes that were clearly unfounded,” he said in 2018.

Nigerian serial fraudster, Ramon Abass, popularly known as Hushpuppi, has agreed to plead guilty to the money laundering charge against him. Hushpuppi, who is known for his luxury lifestyle, was arrested in the UAE in June 2020 alongside 11 of his associates over allegations bordering END_OF_DOCUMENT_TOKEN_TO_BE_REPLACED

The United Kingdom Parliament has said Nigerians under President Muhammadu Buhari administration are at the mercy of non-state actors who unleash attacks on individuals and communities at will. Members of the House of Lords, the upper chamber of the parliament; Caroline Cox, Rowan Williams, David END_OF_DOCUMENT_TOKEN_TO_BE_REPLACED

Some unknown gunmen, believed to be bandits, have killed the All Progressives Congress (APC) chairmanship candidate for the Kachia Local Government Area of Kaduna State, Alamkah Dominic Usman. The APC leader was shot dead along Keffi-Akwanga road in Nassarawa State on his way to Benue END_OF_DOCUMENT_TOKEN_TO_BE_REPLACED

Daud Olatunji   Men of the Ogun State Police Command have arrested an ex-convict, Jamiu Malomo, for allegedly killing a suspected sex worker, Azeezat Akande, 28. The incident occurred at Ilupeju community, Oke-Aregba, Abeokuta, after the 18-year-old suspect had sex with the victim. The state END_OF_DOCUMENT_TOKEN_TO_BE_REPLACED

Tokyo Olympics 2020 Nigeria’s quest on winning medals at 2020 Tokyo Olympic Games has suffered a huge setback as ten of the country’s athletes are ineligible to compete at the start of the track and field events on Friday in Japan. According to the statement from the END_OF_DOCUMENT_TOKEN_TO_BE_REPLACED