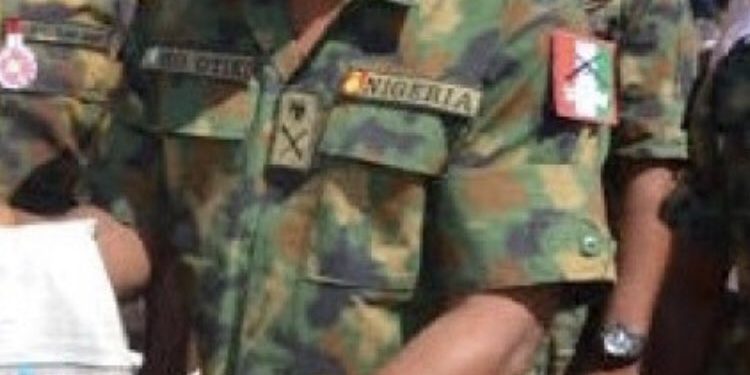 The Nigerian Army and one of its senior officials, Major Gen. Hakeem Otiki are currently at loggerheads over the actual owner of the $376, 120 (N136, 155, 440) in respect of which a Federal High Court in Abuja has granted an interim forfeiture.

The Economic and Financial Crimes Commission (EFCC) had claimed, in an ex-parte application marked: FHC/ABJ/CS/1380/2020, that the money was a proceed of crime and prayed the court for an interim forfeiture order pending the conclusion of the investigation.

In a ruling on January 22 this year, Justice Ijeoma Ojukwu granted EFcC’s prayer, directed that the order for forfeiture be published in a national daily within 14 days for any interested party to show cause within 14 days why a final forfeiture order should not be made by the court.

At the mention of the case on Monday, lawyer to the EFCC, Ekele Iheanacho said the case was scheduled for his client to report of compliance with the order of the court.

Iheanacho said:”We have duly complied with the court order by publishing the interim forfeiture order in Leadership Newspaper and we have filed an affidavit of compliance to that effect.”

Lawyer to Otiki, Olalekan Ojo (SAN) said his client has, in response to the publication, has applied to be made a party in the case and has also filed an affidavit to show cause.

In the affidavit, deposed to by Otiki Kaltume Asabe, other persons and firms were listed as interested parties.

Asabe stated. in the affidavit, that she is a shareholder and a member of Board of Directors of Karama Bureau De Change Ltd and Danest Nigeria Limited (1st and 7th interested parties)

Asabe stated that contrary to the claim by the EFCC that the money was part of proceeds of fraud, the fund was joint property of the 1st, 2nd, and 7th interested parties, having been pooled together from the legitimate incomes of the 2nd interested party and other shareholders and the business capital of 1st interested party.

She insisted that the interim forfeited money was not a proceed of any illegal activity as alleged by the EFCC.

But, in an affidavit to show cause filed by the Nigerian Army, it claimed to the true owner of the money and alleged that Okiti diverted the money from funds officially allocated to him as the GOC, 8 Division, Sokoto.

Mwo Ato Joseph, a Master Warrant Officer, who deposed to the affidavit, said the Nigerian Army was recovering monies and properties of the 8 Division from all the parties involved in the theft and embezzling of funds of the division and that Otiki was among the suspects.

Joseph said Otiki assumed the duty as G.O.Coffee 8 Division on March 23, 2019, and he received all notices of cash payments or deposits from the NA Finance Corp, Army Headquarters and directed for their disbursements and movement within the division.

“I know that as a fact from my investigations that the sum of $376, 120 which the EFCC seeks to be forfeited to the Federal Government is part of the money released to the officer as the GOC of 8 Division of the Nigerian Army which same was converted into dollars by All. Ado Aliyu for the officer.

“From our investigations and from the officer’s statement in paragraph No 7 and 14 of his statement (see Exhibit NA7 above), Alh Ado Aliyu only received a part of the money that was deposited in the officer’s house on July 11, 2019.

“I know as a fact that the Nigerian Army is desirous of collecting all its money siphoned or stolen or embezzled and or misappropriated from the officer,” he said.

When asked by the judge if he has been served with the fresh applications filed, Iheanacho said yes, following which the judge adjourned till April 9 thIs. year for hearing.

The Ogun State Commissioner for Environment who was accused of attempted rape by a teenager in January has secretly resigned his appointment from government, PREMIUM TIMES can report. Abiodun Abdul-Balogun has also coerced the family of the victims not to testify against him in court, END_OF_DOCUMENT_TOKEN_TO_BE_REPLACED

Former Women Affairs Minister, Aisha Jummai Alhassan is dead. Aisha Alhassan, also known as Mama Taraba served as the Minister of Women Affairs during the first term of Buhari administration. She was formerly a Senator representing Taraba State in the National Assembly. She resigned her END_OF_DOCUMENT_TOKEN_TO_BE_REPLACED