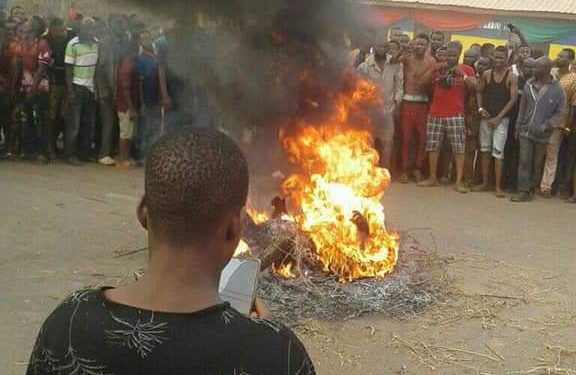 Four persons were on Monday killed and burnt by residents of Otuo community in Owan East local government area.

Three of those killed and burnt were fingered in the death of 17 years Ohiole Glory who was a student of Azama College, Otuo.

The fourth person was a said to be notorious kidnapper and armed robber known as Lukman.

Sources said the victim was said to have hailed from Ikhueran Quarters, Iyeu Otuo and was expected to write her WAEC and NECO later this year.

Vital organs of the victim were removed when her body was discovered.

Sources said the victim lived in the same compound with two of the suspects at Ikhueran Quarters Iyeu Otuo.

One version had it that she was lured into the room of one of the boys where she was killed and her vital organs removed.

The source said one of the suspects popularly known as No Fuck Up was nabbed through investigation and he named his associates after severe beatings.

He was said to have been dragged to the Otuo Divisional Police Headquarters and killed in the presence of policemen and his corpse set ablaze.

A second suspect was allegedly caught few hours later and he was set ablaze.

It was gathered that the third suspect was later nabbed and after interrogation, he said they were sent by a female native doctor from Kogi State.

He reportedly told them she was supposed to use the human parts severed from the victim to perform a ritual for them.

She was picked up at her residence, killed and set ablaze.

When contacted for comments, Edo Police Commissioner, Jimeta Lawan said he has been briefed by the Divisional Police Officer.

Lawan said operatives of the State Criminal Investigative Department (SCID) are carrying out thorough Investigation of the matter.

Yusuf Alli, Abuja  THE Economic and Financial Crimes Commission  (EFCC) yesterday quizzed the Speaker of the Ondo State House of Assembly, Mr. Bamidele Oleyelogun, over his involvement in an alleged N2.4million fraud. A source said: “The commission had received a petition accusing the Speaker of being END_OF_DOCUMENT_TOKEN_TO_BE_REPLACED

A 31-year-old woman has confessed on how her boyfriend made to sell her only child for N300,000 to a buyer in Imo State. According to the woman, Titilayo Kudaisi, her boyfriend, Seyi Akinsete whom she met four months had been into the business of stealing END_OF_DOCUMENT_TOKEN_TO_BE_REPLACED

Police say the houseboy received information that his employer had a lot of money at home ByAgency Report The police in Ondo State on Thursday paraded one Emmanuel Akpan, a houseboy, with his accomplice, Goodness Ekpe, for allegedly killing his employer, Febisola Adebayo. Bolaji Salami, commissioner of END_OF_DOCUMENT_TOKEN_TO_BE_REPLACED

Pfizer confirms fake vaccine shots on sale in two countries × Vials of the Pfizer-BioNTech COVID-19 vaccine are pictured at the Sheba Medical Center, Israel. Photo: AFP Fake doses of the Pfizer coronavirus vaccine were being sold in Mexico and Poland for as much as END_OF_DOCUMENT_TOKEN_TO_BE_REPLACED