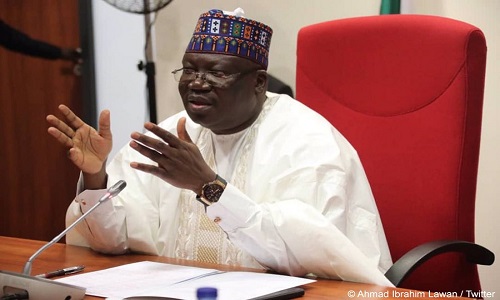 Senate President Ahmad Lawan on Tuesday urged the nation’s heads of security agencies to tighten security at the National Assembly to avert any security breach.

Lawan, who is also the Chairman of the National Assembly, said he had received a report of security threats to the seat of parliament.

A statement by his Special Adviser (Media), Ola Awoniyi, said Lawan spoke at an emergency meeting of the Senate leadership with top security officials at the National Assembly Abuja.

“Personally, I have a report from the Department of State Services (DSS) that we had a security threat. Many unknown and uninvited people came or are coming into the National Assembly complex and we felt we shouldn’t take this lightly.

“From today, we have to find temporary solutions to support the security arrangement here. We will find a more permanent solution by the time the entire environment is remodelled,” he said.

The statement said those at the meeting included the DSS Director-General and representatives of the Defence, the police, the Nigeria Security and Civil Defence Corps (NSCDC), fire service and other security agencies.

Lawan said the security of all Nigerians is a collective responsibility of the legislative and executive arms of government.

“We are working hard; we are working round the clock. We have a very active ad hoc committee that is already engaging with the security agencies.

“For a very long time, this National Assembly will always have people who have no business coming here.

“With the heightening insecurity in the country, the time has come for this National Assembly to be properly secured for its members to carry out their legislative and other functions under a very safe atmosphere.

“Of course, our workers and our visitors too. What that means is that if someone has no business here, that person shouldn’t be in the National Assembly.

“Because we are a parliament, we are a place or an institution where our constituents who feel very strongly about any issue can come and express their opinions.

“Some will come for protests; some will attend public hearings in the committee rooms. Some will visit the gallery; or, in some cases, even enter the chamber when allowed to do so.

“So, we want everybody, as far as the security of this National Assembly complex is concerned, to be at his place. Those who work here directly with us, the security agencies know what we are talking about.”From the gate, people who shouldn’t be here at all, find themselves in. And then people come in, moving from one office to another, looking for nothing because they have no appointment with anyone. Yet, they pass through all the security systems that we have in place,” he added.

Governors of the 19 states in the North have opposed the call by their southern counterparts that the Presidency should be zoned to the South in 2023. This formed part of the resolutions reached on Monday when the governors held an emergency meeting with traditional rulers END_OF_DOCUMENT_TOKEN_TO_BE_REPLACED

Gunmen on Sunday reportedly attacked some members of the All Progressives Congress (APC) in Nnewi North Local Government Area of Anambra State, killing one of its members. DAILY POST gathered that the party members were holding a meeting of Uruagu Ward 3, in preparation for END_OF_DOCUMENT_TOKEN_TO_BE_REPLACED

The Zenith Labour Party Gubernatorial candidate in the forthcoming Anambra Governorship election, Dr Obiora Okonkwo has stated that he is ready to attract a minium of 10billion dollars worth of Direct Foreign Investment to the State from Russia if elected. The Anambra state gubernatorial hopeful END_OF_DOCUMENT_TOKEN_TO_BE_REPLACED