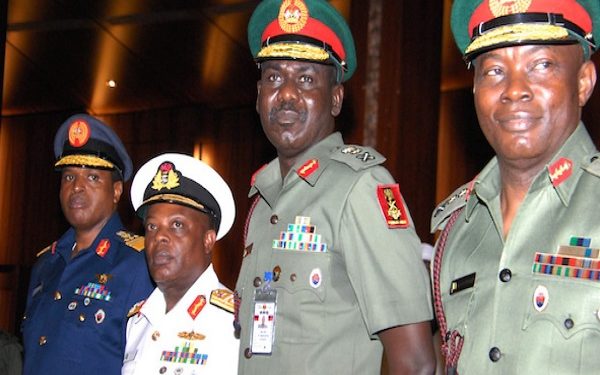 Those waiting for the Service Chiefs to be fired by President Muhammadu Buhari will have to tarry a while.

The President is not ready to dispense with their services, the Presidency said on Sunday night.

It was learnt that security reports before the President, indicate that “Nigeria is in a war situation”, as a result of which the President is weighing the options before him.

A cross section of ethnic-based groups and others have been mounting pressure on the President to replace the service chiefs to give new impetus to the battle against insurgency.

The renewed spate of killings by bandits in the North and the resurgence of Boko haram attacks have also fueled the agitation for the removal of the service chiefs.

There is a plan to organise a protest on Monday against the service chiefs which the government said is sponsored.

Many people have argued that the service chiefs’ continued stay in office beyond four years, has led to low morale in the military.

But presidential spokesman Garba Shehu said on Sunday that: “Removal or sack of service chiefs does not stop all of what we are experiencing. Whether we like it or not, we are in a war situation. The President and the Commander-In-Chief is seeing things that others cannot see. This is why he deserves the benefit of the doubt.

“How can they say the President does not care? His heart is there on how to secure and protect this nation. He is being briefed adequately by the service chiefs and others and he gives directives as the C-In-C.

“It is people who don’t know what the government is doing that are saying the President does not care. They think security is like a market place where everybody is an expert.”

Regarding the clamour for new ideas and strategy, Shehu added: “The strategy is always constantly being reviewed. Nothing is fixed.

“The President is a military man; he has been working very hard with others on multiple solutions to the challenges at hand.

It was learnt that more military hardware and personnel will be deployed in the frontline.

About 3,000 soldiers will be commissioned in March or April for the battle against insurgents.

The Air Force has already inaugurated over 2,000 new air men.

For new equipment, Shehu said: “About 1,000 military hardware bought with military budget and special funds from the Presidency are on the high seas to strengthen the war against insurgency and banditry.”

The Federal Government is hopeful of taking delivery of 12 A-29 Super Tucano fighter jets from the United States.

The contract was awarded to Sierra Nevada Corporation, an American aerospace contractor.

Shehu said: “While the military arsenal is not something you pay for and get, requiring mostly long-time orders, weapons will come in accordance with the terms of contracts.

“This country is expecting the commencement of the delivery of Super Tucano fighter jets, very effective in this kind of warfare, beginning next year from the United States.’’

Shehu explained the security problems are not peculiar to Nigeria as many African countries are under threat.

He said the security challenges were given serious attention at last week’s African Union (AU) meeting in Addis Ababa.

“So much is happening but there is a regional nature of the challenges. At the last AU meeting, there were fears being expressed that terrorists might take over some African states.

“Some people can say that some of these countries are far from us, the truth is that the Sahel Region has a problem.

“The insurgents are carrying out attacks and raids in some countries like Nigeria which they consider lucrative because they abduct or kidnap and collect ransom and they raid to loot.”

Many Nigerians are currently trapped in the Caribbean Island of St. Vincent and the Grenadines due to a volcanic eruption. Dr Levi Odoe, the Consul-General of Nigeria on the Island, has appealed for support from the Nigerian government and other public-spirited entities around the world. END_OF_DOCUMENT_TOKEN_TO_BE_REPLACED

International financial expert and Chartered Accountant, Akin Oladeji-Johnbrown has been declared as hero of Covid-19 pandemic by a Canadian City, Mississauga, Ontario. In the letter of award, by the city’s Mayor, Bonnie Crombie, Oladeji-Johnbrown is among the few residents identified to have rendered critical services END_OF_DOCUMENT_TOKEN_TO_BE_REPLACED

Ned Nwoko By Emma Amaize A former member of House of Representatives, Hon Prince Ned Nwoko has expressed fear over escalating insecurity in the country, warning that if uncurbed, it could threaten the existence of the nation with the lives of citizens already endangered. Prince END_OF_DOCUMENT_TOKEN_TO_BE_REPLACED