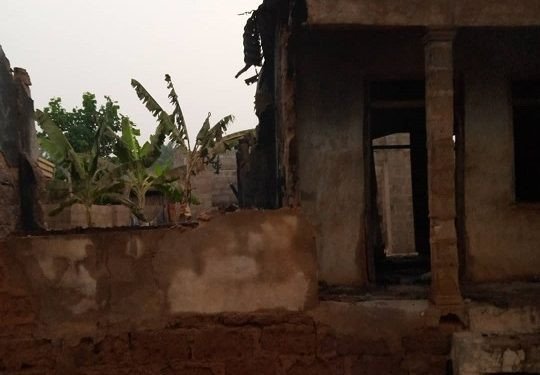 Tragedy struck in Okija, Ihiala Local Government Area of Anambra State today February 15th after three siblings, two boys and a girl between the ages of two months to five years, were burnt to death in a fire outbreak inside their parent’s home.

According to a statement by the state police command spokesperson, Haruna Mohammed, the deceased children suffered varying degrees of burns and died on the spot. He added that properties worth millions of naira were lost in the inferno.

“Today 15/2/ 2020 at about 02:am, there was a fire outbreak at the resident of one Chukwuma Aduhuba ‘m’ of Ugwu Chelekwu village, Okija in Ihiala local government area of Anambra State.

Following the distress call, Police patrol team led by DPO Okija Division rushed to the scene, cordoned of the area and the fire was put off by local volunteers before the arrival of fire fighters.

Meanwhile, the victims where photographed and corpses buried by parents according to their customs.”the statement read

The Inspector General of Police, Mr Usman Alkali Baba, on Thursday, ordered an “internal review” of the allegations against one of its personel, DCP Abba Kyari, over his alleged dealings with an alleged fraudster, Ramon Abass, popularly known as Hushpuppi. The social media was awash END_OF_DOCUMENT_TOKEN_TO_BE_REPLACED

Nigeria’s Deputy Commissioner of Police, Abba Kyari, is not new to being enmeshed in corruption cases. The latest scandal is the revelation by serial internet fraudster, Ramon Abbas, more commonly Hushpuppi, who claimed to have paid bribe to Kyari arrest one of his friends in END_OF_DOCUMENT_TOKEN_TO_BE_REPLACED

Nigerian serial fraudster, Ramon Abass, popularly known as Hushpuppi, has agreed to plead guilty to the money laundering charge against him. Hushpuppi, who is known for his luxury lifestyle, was arrested in the UAE in June 2020 alongside 11 of his associates over allegations bordering END_OF_DOCUMENT_TOKEN_TO_BE_REPLACED

The United Kingdom Parliament has said Nigerians under President Muhammadu Buhari administration are at the mercy of non-state actors who unleash attacks on individuals and communities at will. Members of the House of Lords, the upper chamber of the parliament; Caroline Cox, Rowan Williams, David END_OF_DOCUMENT_TOKEN_TO_BE_REPLACED

Some unknown gunmen, believed to be bandits, have killed the All Progressives Congress (APC) chairmanship candidate for the Kachia Local Government Area of Kaduna State, Alamkah Dominic Usman. The APC leader was shot dead along Keffi-Akwanga road in Nassarawa State on his way to Benue END_OF_DOCUMENT_TOKEN_TO_BE_REPLACED