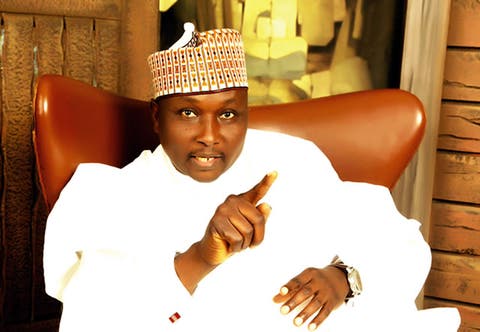 With uncommon patience, I read the pushback of Majority Leader of the House of Representatives, Alhassan Ado-Doguwa, against the ridicule he has harvested since he put his wives on display in the legislative chambers. Last month, while being re-sworn in after winning a rerun ordered by the courts, Ado-Doguwa had shown his narcissistic personality by ordering his four wives up from their seats to be recognised. Then, he announced that his wives had “produced” 27 children for him and he was “still counting.”

After that day, he was subjected to so much derision that he now cries about the public invasion of his privacy. I do not think Ado-Doguwa knows the meaning of “privacy.” When he, unprompted, decided to exhibit his wives like withered vegetables in the evening market, just what was he expecting from the public? Applause?

In his response to his critics, Ado-Doguwa divulged that his father – who died last year – not only fathered children until he was 82 years but also left behind over 40 children. That was how I patiently read to the end of the report. I wanted to read the part where Ado-Doguwa would also tell us the important things that his father also gifted humanity other than progenies, but none was forthcoming. Ado-Doguwa instead gifted us the portrait of his lineage as that of hedonistic men whose major impact on the human race is a population explosion. Tellingly, he also mentioned he was raising the siblings his father left behind. That means his octogenarian father did not have any meaningful wealth to bequeath his children. He just kept on “producing” them, well aware they would end up as someone else’s business. There is a word that describes that kind of behaviour, and it is called irresponsibility.

If Ado-Doguwa, one of his father’s 40+ children, has 27 children and plans to have more, he might well be on his way to break Genghis Khan’s record. What will be different this time is that Genghis Khan was a notable warrior and thinker. Ado-Doguwa, unfortunately, is a mere provincial politician who could not boast of running functional factories or owning vast farmlands he needs his 27+ children to till.

There are, of course, people who agree with Ado-Doguwa that issues of polygamy and expansive breeding are cultural matters and we should respect each other’s cultural differences, but I beg to differ.

That kind of cultural relativist thinking no longer suffices, and we should not hesitate to call out men like Ado-Doguwa when necessary for two reasons.

One, while we should accept and treat every human as a blessing to the world, we should, simultaneously, reject the idea that those who reproduce have no corresponding sense of obligation to breed without a sense of responsibility and accountability. Two, while people’s religion and culture might permit them to practise polygamy, nothing in that religion obliges them to fill everywhere with children. The fact that it is lawful as per one’s faith does not mean it is expedient.

The same excuses of religion and culture that Ado-Doguwa pleads are the same sybaritic males in northern Nigeria – even grown-up men who are incapable of feeding their own selves – adduce as justification for marrying multiple wives and birthing so many children. It is therefore no coincidence that northern Nigeria is one of the poorest and most troubled regions in the world. Today, when we talk about Nigeria as the poverty capital of the world, it is northern Nigeria that we are talking about. When we say Nigeria has enough out-of-school children to fill entire countries in Europe, northern Nigeria is the biggest culprit. According to the latest figure by the World Bank, 87% of all the poor people in Nigeria are northern Nigeria inhabitants. If Nigeria exists in the bad books of the world and currently placed on a USA visa ban, it is no thanks to northern Nigeria and its perennial problems of terrorism. Even herdsmen killings have contributed to Nigeria’s negative image in the world.

This region scarcely contributes to the growth and development of the country, but it drags all of us down. Resources that should have developed the country have been funnelled into catering for the North, to mop up their problems and alleviate the problems the likes of Ado-Doguwa create. For decades now, Nigeria has indulged them with various quota systems so they can catch up with the rest of the country, but no, they continue to lag.

When someone like Ado-Doguwa boasts about racking up children, we should therefore not hesitate to tell them off. All the problems facing northern Nigeria, from poverty to mind-numbing violence, drug abuse, banditry, illiteracy, child abandonment, squalour, malnutrition, unemployment, and diseases are directly traceable to those who breed children they have neither means nor plans to cater for. They have been so badly indulged to the point Ado-Doguwa could announce to the public that he was still “producing” children as if we are a pre-industrial agrarian society. If we have to shame them to the state of self-awareness, then we should.

The argument that men like Ado-Doguwa are “entitled” to four wives as long as they can afford to cater for the women is no longer tenable. The world is evolving beyond these practices, and they need to catch up. First, we should discard the regression encrusted in the word, “entitled.” No human is entitled to another autonomous human. Second, here is a painful truth for them to chew on: very few people in Nigeria can afford polygamy.

The other day, the Emir of Kano, Muhammadu Sanusi II, rightly indicted polygamy for the problems of the North. While Sanusi was 100% correct that polygamy was underdeveloping the North, he also forgot that he – as a polygamist – was just as guilty as the other men that he condemned. In 2015, when the late columnist and social critic, Pius Adesanmi, took on Sanusi because of his marriage to a teenager, Sanusi pleaded the same cultural defence as Ado-Doguwa.

Sanusi claimed polygamy as part of his African identity, distinguishing him from western cultures that have their own version of quirks in same-sex marriages. The shoe-shiners, fruits hawkers, okada riders, and gatemen who also take multiple wives follow in the footsteps of their leaders such as Sanusi and Ado-Doguwa as they claim polygamy as some African cultural ideal.

While both Sanusi and Ado-Doguwa can justify their polygamy based on their social status, they also have to face up to the fact that as long as they are public officials living off state resources, they cannot afford polygamy any more than any other commoner. As long as they do not run factories or enterprises that independently generate money for them, and they mostly rely on public funds to keep their wives, they cannot afford it.

If they could, they would not jockey so hard to thrust themselves in government where they get easy money to sponsor their lifestyles. They would not be so brazenly nepotistic, placing their cohort and clan in every position of power so they can draw resources to not only sustain their polygamous families, but also breed an army of voters whose thumbprint every electoral cycle will keep them in power.

Public officials that have a large family eventually invoice the cost to the state when they loot to maintain their family members with all the trappings of privilege they consider befitting their status. The more they draw from public funds, the thinner the collective purse gets, and the more Nigeria has to squeeze the rest of the country into coughing up money for these elites.

All the money that should be expended on social services for the people will go into preserving the lie that these men can truly afford polygamy. That is why when it comes to their marital affairs and irresponsibility, none of them can plead “privacy” and tell the rest of us to mind our business. As long as their actions affect the rest of us, telling them off is our collective business.

The Cour De’appal De Cotonou, Benin Republic, on Monday, granted embattled Yoruba Nation agitator Sunday Adeyemo aka Sunday Igboho access to medical care, The PUNCH has learnt. This was after court sessions which lasted for more than eight hours. Igboho’s lawyers battled to secure bail for the END_OF_DOCUMENT_TOKEN_TO_BE_REPLACED

At least 50 travellers have been abducted in Sokoto State by armed bandits, a witness has said. An official of the Sokoto government confirmed the abductions but did jot state the number of victims. The victims were travelling on Sokoto-Gusau road on Sunday when they END_OF_DOCUMENT_TOKEN_TO_BE_REPLACED

By Rasaq Ibrahim, Ado-Ekiti   An eminent lawyer, Aare Afe Babalola (SAN), has cautioned Kwara State Governor Abdurahman AbdulRazaq against reviewing the Supreme Court judgment on the land dispute involving Offa and Erin-Ile. He said the governor lacked the power to undertake such action, adding that END_OF_DOCUMENT_TOKEN_TO_BE_REPLACED