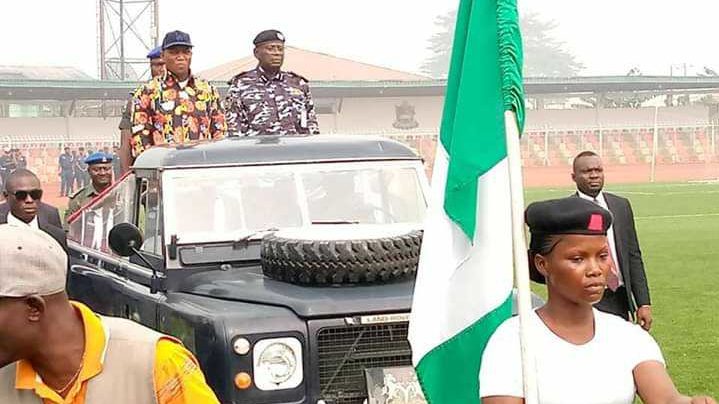 Erstwhile Bayelsa State governor-elect David Lyon was at a rehearsal for his swearing-in when Supreme Court sacked him.

Dressed in a multi-coloured shirt and flanked by military personnel, Lyon was seen in pictures having his pre-swearing-in exercise on the parade ground.

Lyon was seen in all-smiles waving at supporters who cheered him.

The Supreme Court on Thursday nullified the election of Bayelsa State governor-elect David Lyon and his deputy-elect Biobarakuma Degi-Eremienyo, a day before their swearing-in on Friday, February 14.

The court said Degi-Eremienyo, who was Lyon’s running mate in the election, forged the certificate he presented to the Independent National Electoral Commission (INEC).

The court ordered INEC to issue a certificate of return to the Peoples Democratic Party’s candidate Senator Douye Diri who came second in the election.

Early in the year, Lyon, who was yet to be sworn in as Bayelsa State governor, said he had been awarded Nigeria’s best performing governor for 2019.

Although Lyon did not mention the organisation that awarded him but attributed the award to ‘God’.

“I am not even used to receiving awards,” Lyon said while his supporters celebrated his acclaimed feat with applauses.

Scores of aggrieved leaders of the Peoples Democratic Party (PDP) in Oyo State have passed a vote of no confidence on Governor Seyi Makinde. They expressed their grievances during a meeting in Ibadan, on Monday. Present at the meeting were former deputy governor in the END_OF_DOCUMENT_TOKEN_TO_BE_REPLACED

The All Progressives Congress (APC) in Ward 7, has ratified the expulsion of Mr Elvis Ayomanor, the deputy chairman of the Delta State chapter of the party over alleged anti-party activities arising from his alleged role in the court action instituted against the legitimacy of END_OF_DOCUMENT_TOKEN_TO_BE_REPLACED

Adewale Daniel Jayeoba has been declared wanted by the Economic and Financial Crimes Commission (EFCC) over an alleged investment scam. The EFCC said Jayeoba, a native of Ori-Ade Local Government in Osun State, used to live at Suit 1004, Providence Centre, MKO Abiola Way, by END_OF_DOCUMENT_TOKEN_TO_BE_REPLACED

A casual sex affair ended on a sour note and the police have been brought in. It was meant to be a one-night stand with a man she had met through a ‘hook-up’ app, but Angel (not real name) ended up spending eight days with END_OF_DOCUMENT_TOKEN_TO_BE_REPLACED