The cleric assessed the Buhari regime and concluded the President had not only relegated the national interest to the background, but he had also introduced nepotism to the military.

He said under Buhari, it was important for any Nigerian to be a northern Muslim before he could hold any strategic position.

Kukah stated this in his sermon at the Good Shepherd Major Seminary, Kaukau in the Chikun Local Government Area of Kaduna State before the burial of  Michael Nnadi,  a seminarian, who was killed by kidnappers.

He recalled Buhari’s promise during the 2015 electioneering. He stated that while campaigning in 2015, Buhari said if he was elected, the world would not have to worry about insecurity in Nigeria.

Kukah said five years after, the President had brought nepotism and clannishness into the military and the ancillary security agencies.

He stated that the Buhari’s regime had been marked by supremacist and divisive policies that pushed the country to the brink.

Quoting the President, Kukah said Buhari at Chatham House in London before 2015 elections,  said, “I (Buhari) as a retired general and a former Head of State have always known about our soldiers. They are capable and they are well trained, patriotic, brave and always ready to do their duty. If I am elected President, the world will have no reason to worry about Nigeria. Nigeria will return to its stabilizing role in West Africa.

“We will pay sufficient attention to the welfare of our soldiers in and out of service. We will develop adequate and modern arms and ammunition. We will improve intelligence gathering and border patrols to choke Boko Haram’s financial and equipment channels. We will be tough on terrorism and tough on its root causes by initiating a comprehensive economic development and promoting infrastructural development…we will always act on time and not allow problems to irresponsibly fester. And I, Muhammadu Buhari, will always lead from the front.”

Kukah, however, noted that the reverse was the case as the President continued to wallow in insensitivity and despotism. 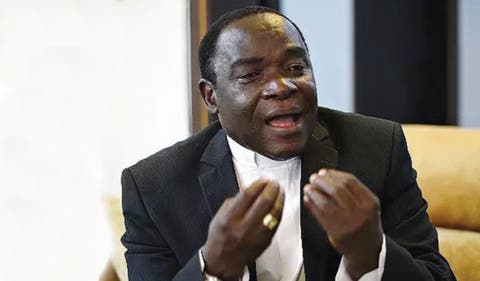 The cleric stated, “No one in that hall or anywhere in Nigeria doubted the President who ran his campaign on a tank supposedly full of the fuel of integrity and moral probity. No one could have imagined that in winning the Presidency, General Buhari would bring nepotism and clannishness into the military and the ancillary security agencies, that his government would be marked by supremacist and divisive policies that would push our country to the brink.

“This President has displayed the greatest degree of insensitivity in managing our country’s rich diversity. He has subordinated the larger interests of the country to the hegemonic interests of his co-religionists and clansmen and women.

“The impression created now is that to hold a key and strategic position in Nigeria today, it is more important to be a northern Muslim than a Nigerian.”

He said the nation was at a crossroads and its future hung precariously in the balance.

Kukah stated, “Our nation is like a ship stranded on the high seas, rudderless and with broken navigational aids. Today, our years of hypocrisy, duplicity, fabricated integrity, false piety, empty morality, fraud and Pharisaism have caught up with us. Nigeria is at a crossroads and its future hangs precariously in the balance. This is a wakeup call for us.”

Says Nigeria, not worth dying for

The cleric said with the current situation, Nigeria was not worth dying for. He stated, “Nigeria is at a point where we must call for a verdict. There must be something that a man, nay, a nation should be ready to die for.

“Sadly, or even tragically, today, Nigeria, does not possess that set of goals or values for which any sane citizen is prepared to die for her. Perhaps, I should correct myself and say that the average office holder is ready to die to protect his office but not for the nation that has given him or her that office.

“The Yoruba say that if it takes you 25 years to practise madness, how much time would you have to put it into real life? We have practised madness for too long.”

Buhari has run most nepotistic and narcissistic government in Nigeria

He added that Buhari remained the only President in the history of the country that had run the “most nepotistic and narcissistic government in known history.”

Kukah said, “Today, in Nigeria, the noble religion of Islam has convulsed. It has become associated with some of the worst fears among our people. Muslim scholars, traditional rulers and intellectuals have continued to cry out helplessly, asking for their religion and region to be freed from this chokehold. This is because, in all of this, neither Islam nor the North can identify any real benefits from these years that have been consumed by the locusts that this government has unleashed on our country.

“The Fulani, his innocent kinsmen, have become the subject of opprobrium, ridicule, defamation, calumny and obloquy. His North has become one large graveyard, a valley of dry bones, the nastiest and the most brutish part of our dear country.

“Why have the gods rejected this offering? Despite running the most nepotistic and narcissistic government in known history, there are no answers to the millions of young children on the streets in northern Nigeria, the north still has the worst indices of poverty, insecurity, stunting, squalor and destitution.”

Kukah said the persecution of Christians in the North was as old as the modern Nigerian state.

He stated that Nigerians had been told that insecurity in the country had nothing to do with religion. He asked, “Really? It is what happens when politicians use religion to extend the frontiers of their ambition and power.

“Are we to believe that simply because Boko Haram kills Muslims too, they wear no religious garb? Are we to deny the evidence before us, of kidnappers separating Muslims from infidels or compelling Christians to convert or die?

“If your son steals from me, do you solve the problem by saying he also steals from you? Again, the Sultan (of Sokoto, Sa’ad Abubakar) got it right: let the northern political elite who have surrendered the space claim it back immediately.”

Many persons were feared to have been killed after a petrol tanker rammed into some vehicles along the Abuja-Keffi Nasarawa expressway. The tanker was said to have gone out of the driver’s control before colliding with the vehicles. It is not immediately clear the exact END_OF_DOCUMENT_TOKEN_TO_BE_REPLACED

Amaechi begins consultation in Taraba in an attempt to woo non-APC states Tobi Soniyi From early permutations, THISDAY can report that the main opposition party, the Peoples Democratic Party (PDP) is most likely to zone its presidential ticket to the South to match the All END_OF_DOCUMENT_TOKEN_TO_BE_REPLACED

It is amazing how the tussle for the re-instatement of OML 110 has taken a dramatic turn by the powers that be since the license was revoked by the Federal Government due to outstanding legacy debts and royalties. It is of significant interest to note END_OF_DOCUMENT_TOKEN_TO_BE_REPLACED

Two Nigerians who were accused of kidnapping and eventually killing four girls in Takoradi, Ghana, were on Friday afternoon sentenced to death by a court in the country after they were found guilty of murder. The two Nigerians, Samuel Udoetuk Wills and John Oji, were END_OF_DOCUMENT_TOKEN_TO_BE_REPLACED

Civil Rights Groups and Corruption Reporter Communications Ltd, publishers of www.corruptionrepoter.com, an investigative media platform, have called for the removal of Mr. Aliyu Abbatti Abdulhameed, from office as NIRSAL Managing Director/CEO, over the Misappropriations of Farmers Money. In a petition to President Muhammadu Buhari, Corruption END_OF_DOCUMENT_TOKEN_TO_BE_REPLACED