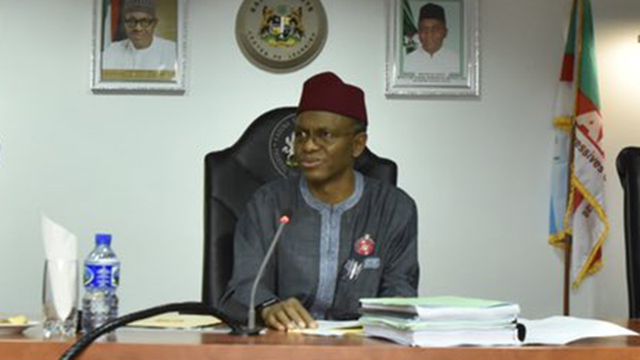 National President of Adara Development Association (ADA), Awemi Dio Maisamari yesterday told the Commission of Inquiry set up by the Kaduna State Government how Governor Nasir El-Rufai humiliated and imprisoned several Southern Kaduna people and some of their leaders.

He described how he was arrested at a town hall meeting convened by El-Rufai in February 2019.

He stated this at the Public Hearing convened by the Judicial Commission of Inquiry into the Crisis in Kajuru, Kachia and Chikun council areas and neigbouring communities at the State House, Kaduna.

Maisamari, who was defending ADA’s memo, was being crossed examined by the lawyer to Adara elders, Maxwell Kons.

He told the commission that a meeting on the crisis in Kajuru and Kachia, which the Adara are claiming 95 per cent ownership, he said, was convened in Kasuwan Magani on February 15, 2019.

“I was told that El-Rufai was holding a stakeholders meeting at the Primary Health Facility in Kasuwan Magani in which Hausa, Fulani, Gbagyi, Christian and Muslim clerics and influential residents of Kasuwan Magani were in attendance.

“When it was time for contributions and suggestions, I raised up my hands, but as soon as I stood up and introduced myself as President of ADA, El-Rufai said I should sit down.

“He said he was not going to allow me to speak, insisting that I was part of the problem. I was then arrested by the police officers on his entourage and taken to the Police Force Headquarters in Kaduna, detained and subsequently sent to prison.

“While in prison, more Adara elders and leaders were arrested and sent to Kaduna Convict Prison based on allegations that they were complicit in the violence that ravaged Adara communities in Kajuru between February and March, 2019 in which the Adara claimed that armed Fulani herdsmen killed no fewer than 240 Adara natives and razed 12 communities,” he said.

He further explained that after spending 109 days in prison, they were asked to go, saying, “We were discharged and acquitted because investigations were concluded and that we had no hand in the violence in which our people were the major victims.”

Maisamari noted that the Kaduna State Government showed bias against the Adara people and other non-Hausa-Fulani ethnic nationalities of Southern Kaduna through oppressive policies that sought to impede the progress, peace and safety of indigenes of Southern Kaduna.

Governor El-Rufai had set up the commission six months ago headed by Justice Isa Aliyu of the Kaduna State High Court to unravel the persons and groups behind the violence that rocked the areas and make appropriate recommendations.

The Cour De’appal De Cotonou, Benin Republic, on Monday, granted embattled Yoruba Nation agitator Sunday Adeyemo aka Sunday Igboho access to medical care, The PUNCH has learnt. This was after court sessions which lasted for more than eight hours. Igboho’s lawyers battled to secure bail for the END_OF_DOCUMENT_TOKEN_TO_BE_REPLACED

At least 50 travellers have been abducted in Sokoto State by armed bandits, a witness has said. An official of the Sokoto government confirmed the abductions but did jot state the number of victims. The victims were travelling on Sokoto-Gusau road on Sunday when they END_OF_DOCUMENT_TOKEN_TO_BE_REPLACED

By Rasaq Ibrahim, Ado-Ekiti   An eminent lawyer, Aare Afe Babalola (SAN), has cautioned Kwara State Governor Abdurahman AbdulRazaq against reviewing the Supreme Court judgment on the land dispute involving Offa and Erin-Ile. He said the governor lacked the power to undertake such action, adding that END_OF_DOCUMENT_TOKEN_TO_BE_REPLACED