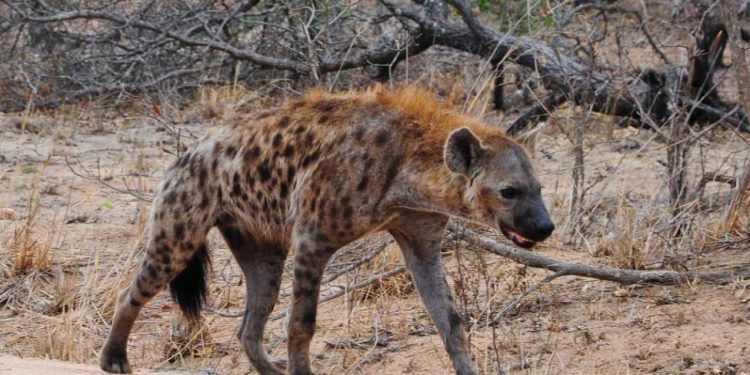 There was panic in Nekede community, Owerri, Imo State, when a giant hyena escaped from the Imo State Zoological Garden and Wildlife Park.

The animal was recaptured by wildlife experts about six hours later.

General Manager of the park Francis Abioye confirmed this yesterday.

Abioye, who led the recapture, said there nobody died as the animal was recaptured by experts through the ‘Physical Restricted Method’.

He hinted that the operation lasted six hours. According to him, the animal dug a big underground hole, which allowed it to escape from the cage.

After breaking out from its den, the hyena fled into the community through a broken fence allegedly vandalised by youths in 2019.

He said: “I can confirm to you that a hyena escaped from its cage early this morning through an underground hole it dug; it was later recaptured by experts. The animal was able to escape from the zoo through a vandalised part of the perimeter fence within the conservative area of the zoo.”

Abioye said the operation was aided by armed personnel of the Nigerian Security and Civil Defence Corps (NSCDC) attached to the zoo. He urged the public to go about their normal business as the situation had been brought under control.

AbdulGafar Alabelewe, Kaduna Bandits at the weekend killed an 80-year-old woman, a Ward Head and three persons in separate attacks on two villages of Chikun and travellers in Giwa Local Government Area of Kaduna State. Three other persons were confirmed to have been injured in END_OF_DOCUMENT_TOKEN_TO_BE_REPLACED

By Justina Asishana, Minna Bandits have kidnapped 17 persons in three communities in Bassa/Kukoki ward of Shiroro local government area of Niger state. They were kidnapped on Saturday night in Madagwa, Wongo and Marenje communities. It was learnt the bandits stormed the town at different END_OF_DOCUMENT_TOKEN_TO_BE_REPLACED

The recently signed Finance Act, which empowers the federal government to help itself to a loan of N850 billion naira from dormant accounts and unclaimed dividends, is creating concerns amongst Nigerians. Through the Act, the federal government is targeting some N850bn from the said funds. END_OF_DOCUMENT_TOKEN_TO_BE_REPLACED

In recent years, children from Kano State were kidnapped and sold to willing buyers in the southern part of the country. Some of the victims who were rescued by the police shared their experiences when they were reunited with their families. This week, seven more END_OF_DOCUMENT_TOKEN_TO_BE_REPLACED