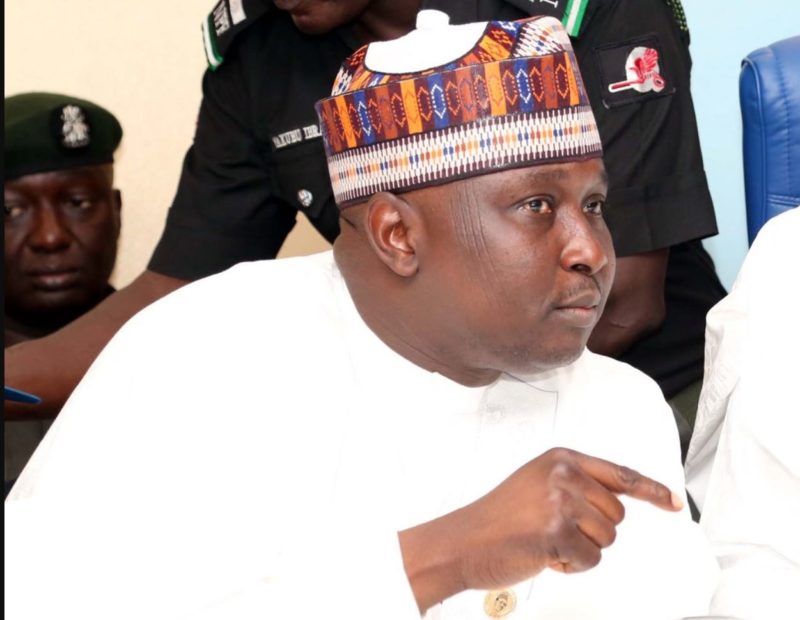 The Majority Leader of the House of Representatives, Alhassan Ado-Doguwa, has condemned those who criticised him for showing off his four wives and 27 children on the floor of the chamber, warning that it was against his private life.
Ado-Doguwa, who said he was allowed as an adherent of Islam to marry that number of wives, nothing that it was a common thing in the northern part of the country dominated by Muslim Hausa and Fulani.

According to him, his father, who died in 2019 at 86, was survived by over 40 children, one of whom was a four-year-old.
Ado-Doguwa, who was in the National Assembly between 1992 and 1993 in the botched Third Republic, has been a member of the House since 1999, representing Tudun-Wada/Doguwa Federal Constituency of Kano State.

On January 29, 2020, Ado-Doguwa was among the six new members who were sworn in after winning reruns declared by courts.
The ceremony had become dramatic when Ado-Doguwa had spent about one hour to thank the leadership and members of the House, the All Progressives Congress and his four wives and 27 children, some of whom were in the chamber.
The announcement by the lawmaker had generated cheers and applause from the audience.

The Speaker, Femi Gbajabiamila, who interjected the lawmaker, had said he wanted to be sure if the Majority Leader actually said “27 children and still counting.” The comment also generated laughter in the chamber.

Ado-Doguwa later “apologised” to Governor Abdullahi Ganduje of Kano State for having four wives when the governor only had one.

“As far as I’m concerned, as a Muslim, it is not I who caters for them, God caters for everyone, He only uses human beings as agents. And I’m glad that God is using me as His agent to feed my entire family, to train them and take them to good schools which I’m doing. And catering for my family does not in any way deprive me of the privilege to also cater for the downtrodden in the society, and that is the secret of my coming to the House day-in-day-out.”

He also said “If anybody from the South looks at me somehow, because that (having more wives and children) is not part of their tradition, I’d understand. But I’d be more disappointed if a Fulani, Hausa or a Kanuri girl will look at what I did with any sense of disdain. And if not that I’m also a member of the fourth estate of the realm by extension, the first thing I would do was to take it up with Daily Trust for allowing a lady, a columnist, to come and attack my personality, make reference to my name openly. Not because I’m Leader of the House but as a person, I’m entitled to the privacy of my family life. As a person, that’s embarrassing. This is my position. And I want to warn everyone. Everyone!
“My wives are respected women, they are proud of me and I’m proud of them in their collective entity. And if there is any trouble, do you think I could force them to come to the floor of the House? And one thing you don’t know: right from 1992 when I got married and successfully got the remaining three, all of these women have been my wives; I’ve never divorced anyone of them.

“If you like, I can give you records of so many VIPs who divorced their wives. I married from my locality, from respected families among my people in my constituency. I know their families and they know mine before we came together as man and wives.”

The lawmaker described his wives as legitimate, indigenous and not ‘imported’.
He said, “I’m not only disappointed, I’m disenchanted by the kind of reactions I received especially on social media on the day of my swearing-in, simply because I brought my four wives with me on the floor of the House and I told the House that these people, these women are here to respect the institution of the House.

“These are my legitimate wives; everybody knows them, starting from Abuja down to my village. And I’m a Muslim; not only a Muslim, I’m a proud Muslim, practising Islam. And the most fundamental pillars of every faithful person in Islam is what they said Prophet Muhammad should be your watchword, the Prophet should be your role model. Every proud Muslim places Prophet Muhammad (PBUH) as his role model in actions and in thoughts. So, as a proud Muslim, marrying four wives is in all ramifications, copying the practice of Muhammad (PBUH).

He further said, “As a good Muslim that I am, I tell you that I’m proud of my family; I’m proud of marrying four wives; I’m proud these four wives are not even imported. We have a lot of people here who call themselves VIPs and who went out to import wives. My wives are indigenous wives; not only are they indigenous, they are my village people, all four of them are from Doguwa Local Government Area. So, I cannot be a subject of embarrassment unnecessarily.

“So, I want you guys (journalists) to take this out as widely as possible. This is my reaction. And I’ll not take it lightly. And if I have the opportunity, God willing, I’ll continue to count my kids.”

The All Progressives Congress (APC) in Ward 7, has ratified the expulsion of Mr Elvis Ayomanor, the deputy chairman of the Delta State chapter of the party over alleged anti-party activities arising from his alleged role in the court action instituted against the legitimacy of END_OF_DOCUMENT_TOKEN_TO_BE_REPLACED

Adewale Daniel Jayeoba has been declared wanted by the Economic and Financial Crimes Commission (EFCC) over an alleged investment scam. The EFCC said Jayeoba, a native of Ori-Ade Local Government in Osun State, used to live at Suit 1004, Providence Centre, MKO Abiola Way, by END_OF_DOCUMENT_TOKEN_TO_BE_REPLACED

A casual sex affair ended on a sour note and the police have been brought in. It was meant to be a one-night stand with a man she had met through a ‘hook-up’ app, but Angel (not real name) ended up spending eight days with END_OF_DOCUMENT_TOKEN_TO_BE_REPLACED

GBEMISOLA AJIBOYE Salihu Lukman, director-general of the Progressive Governors Forum (PGF), has explained why some All Progressives Congress (APC) members are against the defection of Femi Fani-Kayode. On Thursday, the former minister of aviation dumped the Peoples Democratic Party (PDP) for the APC and was presented to END_OF_DOCUMENT_TOKEN_TO_BE_REPLACED