There were indications on Sunday that the South-West state executive councils would on Wednesday discuss the bills on Amotekun corps.

It was gathered that a security network agency would be established in each state to oversee the Amotekun corps.

The Ondo State Attorney General, Kola Olawoye, said after the passage of the bill, each state would apply to the Inspector General of Police, Mohammed Adamu,  for a gun licence  for the Amotekun corps.

The South-West governors, had at a summit organised by the Development Agenda for Western Agenda on January 9 agreed to set up Operation Amotekun to address killings and kidnapping in the zone.

The Federal Government initially said the security outfit was illegal, but  during a meeting in Abuja attended by Vice-President Yemi Osinbajo; the South-West governors and the Attorney General of the Federation, Abubakar Malami, SAN, both the FG and the governors agreed that the South-West states should give a legal  backing to the security outfit.

The Attorney General and Commissioner for Justice in Ekiti State, Wale Fapohunda,  in an interview with The PUNCH, confirmed that the bill for a law establishing Amotekun corps  provided for the establishment of a security network agency to oversee the operations of the corps.

Fapohunda, who said the Amotekun bill for Ekiti State was ready, stated  that the state  Governor, Dr Kayode Fayemi, had directed that it should be presented to the state executive council on Wednesday.

He  said, “We have drafted a bill that is concise and comprises only the most necessary provisions. Community policing is an important component of the proposed Ekiti State Amotekun Law.

He said the bill also provided for “the establishment of an independent Amotekun Corps Complaints Board to expeditiously inquire into and report  any matter regarding the conduct of Amotekun corps, specifically as it relates to abuse of power including corruption and human rights violation.”

Explaining functions of the Ekiti State  Security Network Agency, Fapohunda said besides overseeing Amotekun corps,  it would “collaborate with and assist the police and other security agencies in maintaining law and order.” 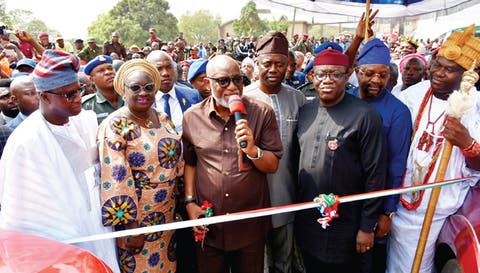 He added that it would make available to the police and other security agencies  relevant information on crime and  crime-related activities, suspicious activities and suspects.

The AG added that the agency would undertake “routine day and night patrols on major roads, remote areas, hinterland, forests and inland waterways.”

According to Fapohunda,  it will ensure  that offenders are identified, arrested, registered and promptly handed over to the nearest police station or post.

He also listed the functions of the agency to include  “disarming  unauthorised persons in possession of arms and other dangerous weapons.”

Fapohunda added that it would also  render prompt assistance to crime and accident victims as well as undertake joint operations with the police and other security agencies.

On his part,  the Ondo State Attorney General and Commissioner for Justice, Olawoye on Sunday, the proposed law was given  to the state Governor, Rotimi Akeredolu, SAN, on Saturday, after the Friday meeting of the AGs.

He said, “We harmonised the bill and we gave  a copy of the bill to the governor yesterday (Saturday). It will be presented to the state executive council where it will be deliberated upon after which it will be sent to the House of Assembly.”

On the time it would be sent to the legislature, Olawoye said the speaker of the Assembly would get the bill after its approval.

He also explained that the security outfit would be called  the Ondo State Security Network Agency “but it would be driven by Amotekun corps . It  will be replicated in other South-West states .”

S’West states to apply for Amotekun gun licence from IG

Olawoye also said each state would apply to the Inspector General of Polic for a gun licence for the Amotekun corps.

The PUNCH had on January 13 reported that the police warned Amotekun operatives against carrying  firearms.

They said Oodua Peoples Congress members and hunters working as Amotekun operatives could only carry Dane guns, which do not use cartridges.

But the Oyo State Attorney General, Prof Oyelowo Oyewo, who briefed journalists after the AGs’ meeting in Ibadan on Friday, said, “Carrying of arms is legalised by the law and Amotekun outfit will comply with all  the laws of the land.”

Olawoye, in the interview with The PUNCH, said, “A section of the bill stipulates that the Amotekun corps will be carrying arms licensed by the Inspector General of Police, in line with the Police Act . Each state will apply for the licence. After the law has been made, we will apply to the IG for the licence for the corps. Each state will  have a corps commander, who will be in charge of administration, operational guidelines and other things.

“The agency will  have a governing board. The commander will  be a member of the board . The commander must be a person of proven integrity, who will be a retired military or police officer of 10 years cognate experience. This is how it will be in other five states. The corps commanders of the states will be meeting if the need be. I am sure the individual state should be able to pass the law before the end of the month.”

Also, the Attorney General and Commissioner for Justice in Ogun State, Akingbolahan Adeniran,  said the Amotekun bill would be submitted this week to the state governor, Dapo Abiodun .

Adeniran said this on Sunday  while responding to the questions from The PUNCH, adding that, his office was planning to do this  in line with the agreement at the meeting of AGs of the South- West states  in Ibadan.

He said “The resolution at the meeting of the body of attorneys general of the South-West is to submit the bill to our respective governors and the executive councils this week .

“We also aim to get it submitted, other things being equal to the House of Assembly in our respective states before the end of the week.”

The Osun State Government on Sunday said the bill for Amotekun might be transmitted to the House of Assembly this week.

Speaking to one of  our correspondents, Chief Press Secretary to the governor, Ismail Omipidan, said after the meeting of the South-West attorneys general last week, the draft was ready for presentation to the state executive council.

“Hopefully, after the state executive council meeting, the bill will be ready for presentation to the lawmakers. We are hopeful that the lawmakers will have the bill this week,” Omipidan said.

A 37-year-old man, Nonso Eze, has been arrested by men of the Anambra state police command for allegedly pushing his 23-year-old girlfriend from a five storey building in Awada, Onitsha today January 23, NaijaCover Reports. A statement released by the spokesperson of the command, Haruna END_OF_DOCUMENT_TOKEN_TO_BE_REPLACED

The National Assembly has postponed its resumption till Tuesday, February 9, 2020. Both Chambers on December 21st, 2020 adjourned plenary till January 26, 2021, to enable members to observe the Christmas and New Year festivities. Clerk to the National Assembly, Arc. Ojo Amos disclosed this END_OF_DOCUMENT_TOKEN_TO_BE_REPLACED

An irate President Muhammadu Buhari has endorsed the use of lethal force against Sunday Igboho and his supporters if they continue to “disturb public peace” in Oyo State, two police sources familiar with the matter told Peoples Gazette on Saturday. Sunday Igboho, whose real name END_OF_DOCUMENT_TOKEN_TO_BE_REPLACED

The Governor of Abia State, Dr Okezie Ikpeazu has dissolved the Abia State Executive Council, IgbereTV reports. The governor has also recalled his suspended Chief of Staff, Dr. ACB Agbazuere. A statement made available to IgbereTV on Saturday morning by the Chief Press Secretary to END_OF_DOCUMENT_TOKEN_TO_BE_REPLACED

The Inspector-General of Police, Mohammed Adamu, has ordered the arrest of Sunday Adeyemo, popularly known as Sunday Igboho, for giving Fulanis in Oyo State an ultimatum to leave the state. The Senior Special Assistant to the President on Media and Publicity, Garba Shehu, revealed this END_OF_DOCUMENT_TOKEN_TO_BE_REPLACED