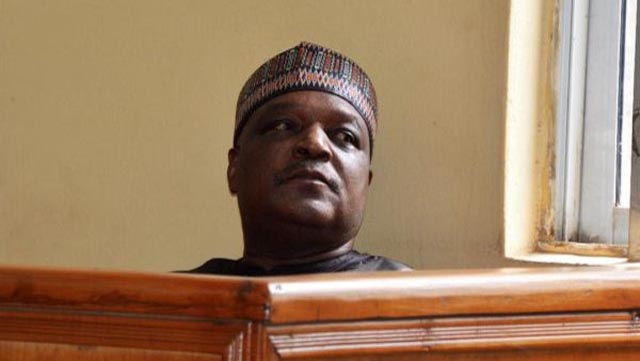 The Supreme Court on Friday upheld the conviction of ex-Governor of Taraba, Jolly Nyame.

NAN reports that on Nov. 17, 2019, the Court of Appeal also upheld the conviction of Nyame.

NAN reports that the court, in two unanimous judgments by two panels, held that Justice Adebukola Banjoko of the High Court of the Federal Capital Territory (FCT) in Gudu, Abuja was right to have convicted both men in view of the overwhelming evidence presented by the prosecution led by Rotimi Jacobs (SAN).

The judgements were on the appeals filed by Nyame, against the judgment of the High Court of the FCT given on May 30, 2019.

ar, and the appeal by Dariye, which challenged his conviction in the judgement given on June 12 this year.

In the May 30 judgment, given on the charge marked: FCT/ABJ/CR/82/07, the trial court convicted Nyame on 27 out of the 41 counts contained in the charge filed against him by the Economic and Financial Crimes Commission (EFCC) in July 2007.

The trial court sentenced him to a cumulative 28 years imprisonment, without an option of fine.

The breakdown of the sentence is as follows: 14 years upon conviction for criminal breach of trust; seven years for receiving gratification; five years for obtaining valuable public properties without consideration, and two years for criminal misappropriation.

A single mother, Imole Sesan, has allegedly set a family of seven on fire in the Idimu area of Lagos State. It was gathered that the victims, Remi Joseph, her children and grandchildren were sleeping in a shop when Sesan locked the family in, doused END_OF_DOCUMENT_TOKEN_TO_BE_REPLACED

The Sultan of Sokoto, Alhaji Sa’ad Abubakar 111 has lost his younger brother, Algaji Abdukadir Abubakar who is also a Commissioner in the Sokoto State Government.. His death was announced yesterday. Sultan and Buhari Meanwhile, President Muhammadu Buhari has sent in his condolence to the END_OF_DOCUMENT_TOKEN_TO_BE_REPLACED

Bayo Onanuga The Buhari administration is now caught in a policy quagmire over whether petrol subsidy should be resumed or allow the market to determine the price. As far as the administration is concerned, the subsidy regime has ended, so as to free cash for END_OF_DOCUMENT_TOKEN_TO_BE_REPLACED

No fewer than nine out of the 16 local government council chairmen of All Progressives Congress(APC) in Kwara state on Friday pledged their support and said they were accountable to Hon Bashir Omolaja Bolarinwa as State caretaker chairman in accordance with the APC Constitution. Some END_OF_DOCUMENT_TOKEN_TO_BE_REPLACED

By Ogochukwu Anioke, Abakaliki Presidential campaign posters of former Senate President and Secretary to the Government of the Federation (SGF), Senator Anymi Pius Anyim, have flooded Abakaliki, the Ebonyi State capital, and the social media. The campaign posters, tagged: Progress 2023, with the picture of END_OF_DOCUMENT_TOKEN_TO_BE_REPLACED