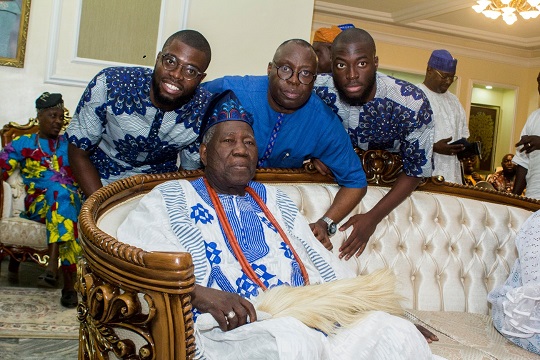 The monarch, who was accompanied by his wife, Olori Rasheedat Adetunji, was welcomed amid cheers and rejoicing into the home of the Akanbis by Akanbi and his wife, the Yeye Okanlomo of Ibadan land, Chief (Mrs.) Zhikrah Akanbi on Tuesday.

The Olubadan’s visit was to check up on the Okanlomo of Ibadanland for the first time in the New Year as well as commiserate with him for the loss of his Father-in-law, Late Alhaji (Chief) Daud Adekunle Abdul, who until his death was the Balogun of Ikare land, Baba Adinni of Ondo state and the Alatileyin Adinni of Lagos.

The Olubadan described Akanbi as his special son in whom he is well pleased, which informed tallies his title Okanlomo of Ibadan land’ (a rare son).

The Queen also added pleasant remarks about the Yeye Okanlomo of Ibadan land, Chief Zhikrah Aduke Akanbi, describing her as a loving and wonderful wife.

The Okanlomo expressed gratitude for the rare privilege to host the Olubadan, saying he will treasure the day for the rest of his life.

Many Nigerians are currently trapped in the Caribbean Island of St. Vincent and the Grenadines due to a volcanic eruption. Dr Levi Odoe, the Consul-General of Nigeria on the Island, has appealed for support from the Nigerian government and other public-spirited entities around the world. END_OF_DOCUMENT_TOKEN_TO_BE_REPLACED

International financial expert and Chartered Accountant, Akin Oladeji-Johnbrown has been declared as hero of Covid-19 pandemic by a Canadian City, Mississauga, Ontario. In the letter of award, by the city’s Mayor, Bonnie Crombie, Oladeji-Johnbrown is among the few residents identified to have rendered critical services END_OF_DOCUMENT_TOKEN_TO_BE_REPLACED

Ned Nwoko By Emma Amaize A former member of House of Representatives, Hon Prince Ned Nwoko has expressed fear over escalating insecurity in the country, warning that if uncurbed, it could threaten the existence of the nation with the lives of citizens already endangered. Prince END_OF_DOCUMENT_TOKEN_TO_BE_REPLACED