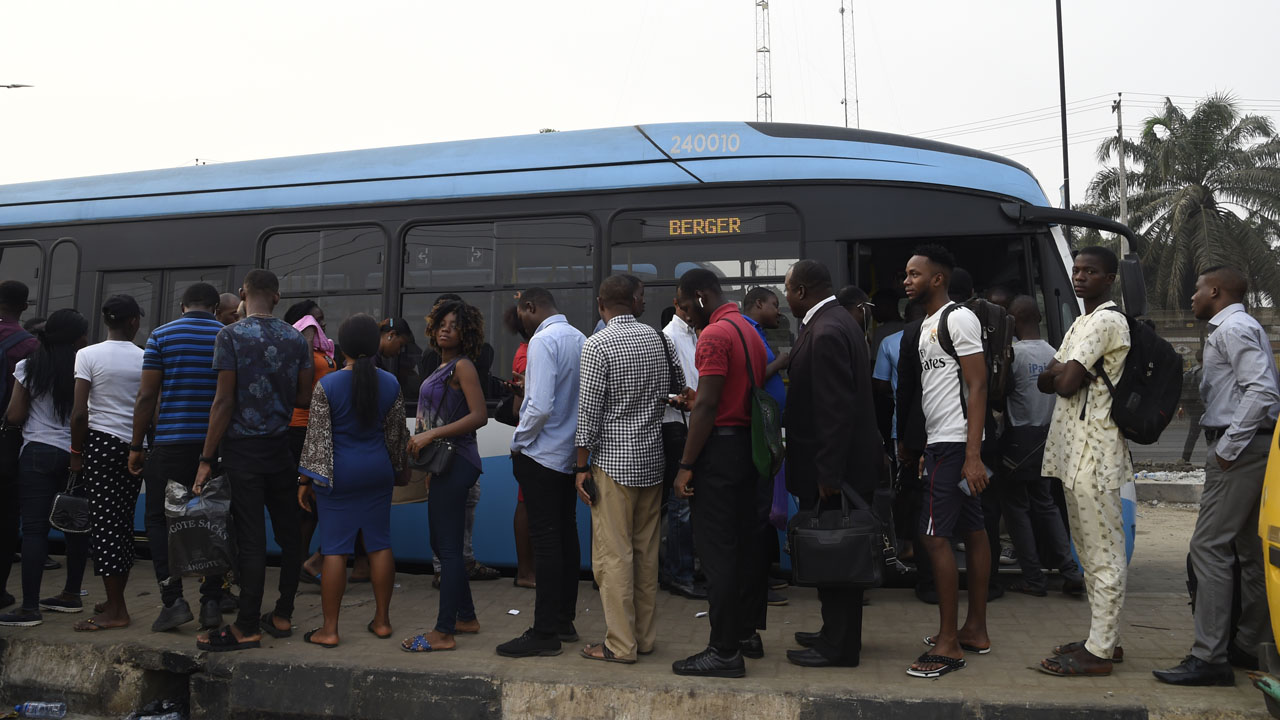 Passengers queue to board a bus provided by the government as a palliative to cushion the effect of the ban of motorbike taxis at the Ojodu Terminal in Lagos, on February 6, 2020. – Nigeria’s traffic-choked economic capital Lagos state government has barred motorbike taxis and motorised rickshaws, known locally as okada and keke, from swathes of the city over what officials described as “scary figures” for fatal accidents in recent years. The ban covers numerous central districts and suburbs of the chaotic megacity of 20 million people and major highways and bridges across Lagos state. (Photo by PIUS UTOMI EKPEI / AFP)

For commuters in Nigeria’s commercial city, Lagos, these are trying times. Weeks ago, the Lagos State Government announced a restriction on the operations of commercial motorcycles and tricycles in six local governments – Apapa, Eti Osa, Ikeja, Lagos Island, Lagos Mainland and Surulere.

Motorcycles and tricycles – popularly called okada and keke respectively – not only provide quick getaways from the maddening gridlock the city is cursed with every day, but they are also the only reliable means of transportation for hundreds of thousands of residents to move to and from workplaces and navigate the inner streets of the overpopulated state.

The restriction, which came into effect on February 1, was not the sort of New Year gift residents looked forward to. Already, okada riders have clashed twice this week with the police in the Lagos suburbs of Ijora and Iyana Ipaja.

Eyewitnesses said four persons, including a schoolgirl, were killed in those clashes.

New Headache
The situation may become direr for commuters as government agents are ready to beam their searchlight on Uber drivers. An official of the Lagos State Vehicle Investigation Service told The Guardian on Thursday that the state has started enforcing necessary laws on the drivers on ride-hailing platforms such as Uber.

“My car was impounded last week and I was asked to pay N60,000 into the government’s account before it could be released to me,” said Moses Ndubuisi.

Ndubuisi was not the only Uber driver whose car was impounded. There are many others like him.

An official of the Lagos Vehicle Inspection Services told The Guardian that commercial vehicle drivers and those on Uber and other ride-hailing platforms must be certified by the Lagos Drivers’ Institute before they can operate in the state.

Moreover, drivers on ride-hailing platforms must have hackney permits. This means they have to change their vehicle registration to commercial.

Another official of the VIS said Uber has also not paid an operator license fee to the state government.

Where is Uber?
The official of the VIS insisted that Uber was aware of all the requirements needed by the drivers, including the hackney permit.

Some of the drivers, whose cars were impounded, have already paid the fine and have taken receipt of their vehicles. Some are looking to Uber to help solve the problem. But that has not happened.

“Uber sent us a message last Friday that they were closing the office. Since then, the office has not been opened,” an exasperated Ndubuisi said. “That is not fair. You can not call them except if you go to the office or contact them through the app.”

The message sent to the drivers said the Lagos Greenlight Hub would be closed on January 31. The message said support for drivers would be rendered via t.uber.com/westafricachat or the app.

But Uber’s head of communications in West Africa Efosa Aiyevbomwan said in an emailed statement that the Nigerian office was reopened on Tuesday contrary to what Ndubuisi said.

Aiyevbomwan said, “Uber continues to work closely with all relevant stakeholders in Lagos to ensure that our operations align with best practices locally and internationally, whilst also ensuring that drivers continue to earn a living and riders are able to move from point A to B, comfortably and conveniently, at the touch of a button.”

A member of the Senate, representing Osun East Senatorial District, Senator Francis Fadahunsi, yesterday, alleged that fraud was rampant within the Nigerian armed forces and some paramilitary agencies, noting that the nation would not overcome insecurity if left unchecked. The senator said the arms and END_OF_DOCUMENT_TOKEN_TO_BE_REPLACED

There was tension on Friday at the Abattoir community in the Jos South Local Government Area of Plateau State following the arrest of a Lebanese said to be using underage girls to act pornography. The man whose name was not immediately known was said to END_OF_DOCUMENT_TOKEN_TO_BE_REPLACED

There was tension on Friday at the Abattoir community in the Jos South Local Government Area of Plateau State following the arrest of a Lebanese said to be using underage girls to act pornography. The man whose name was not immediately known was said to END_OF_DOCUMENT_TOKEN_TO_BE_REPLACED

There was tension on Friday at the Abattoir community in the Jos South Local Government Area of Plateau State following the arrest of a Lebanese said to be using underage girls to act pornography. The man whose name was not immediately known was said to END_OF_DOCUMENT_TOKEN_TO_BE_REPLACED