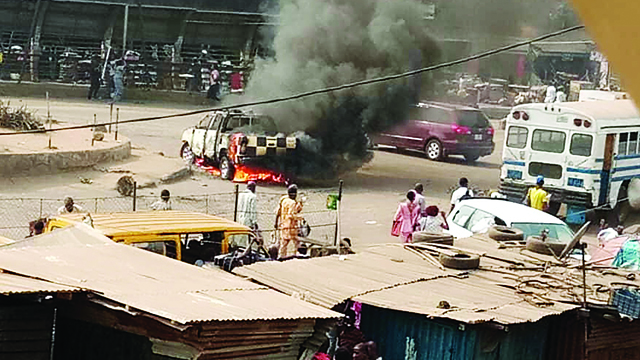 A young schoolgirl was reportedly killed after being hit by a stray bullet during a clash between the police and commercial motorcycle operators popularly known as Okada riders in Iyana-Ipaja area of Lagos yesterday, following a ban on their activities by the state government.

Policemen trying to disperse the protesters, which had been hijacked by some hoodlums, fired bullets in the crowd, which hit and killed the little girl in the process. The incident is coming two days after Okada riders also clashed with the police at Ijora area of the state.

While the commotion lasted, bonfires were set on the road impeding movement of vehicles. Some vehicles were also destroyed as the hoodlums hurled stones at law enforcement officers. An eyewitness said the operational vehicle of Lagos State Traffic Management Authority (LASTMA) was burnt, while police patrol vehicles and other properties were torched during the clash, which lasted several hours.

Shops were looted by the miscreants who seized the opportunity to loot and vandalized properties. According to an eyewitness, who identified himself as Gbenga Alawaye, the clash started when policemen allegedly went into various shops where motorcycles are being sold and attempted to impound them. The dealers, apparently, felt they have not committed any offence, resisted the police from removing the items and in the process led into chaos as miscreants joined in the confrontation that ensued.

Reacting to the clash, Lagos State police spokesman, Bala Elkana, said: “The task force on Environmental Sanitation and Special Offences and some teams of police officers carried out enforcement on restrictions of motorcycles and tricycles at Aboru area, where 86 motorcycles were impounded. The riders of the impounded motorcycles and thugs in large number advanced to Iyana-Ipaja and attacked police officers on duty at Iyana Ipaja roundabout, Alaguntan junction and Aboru junction.

“One Inspector Salifu Umar was injured by the hoodlums but no life was lost in the attack. The injured Inspector was rushed to the hospital and he is responding to treatment. One LASTMA vehicle and two Neighbourhood Watch patrol bicycles were burnt by the hoodlums. The windscreen of a police patrol vehicle was also damaged. Reinforcement was sent to the affected areas by the Command Headquarters and the situation was brought under control. Thirty four suspects were arrested in connection with the violent attacks.”

Meanwhile, the state government has reiterated its commitment not to reverse the decision, sparking criticisms from far and near. Lagos State governor, Babajide Sanwo-Olu, yesterday warned LASTMA officers against harassing motorists, as it would be frowned at by him.

Speaking at the passing-out parade of induction of 1,017 new LASTMA officers, Sanwo-Olu maintained that any unnecessary action against the people would not be encouraged. He stated that his administration has zero-tolerance for corruption, imploring the officers not to leave any room for the residents to doubt their integrity in traffic management.

The governor reiterated that the ban on okada and tricycles has come to stay, appealing with residents to see reason with the government. He added that the state government do not intend to inflict pains on the people but for their safety. He maintained that the action was for the good of Lagosians, promising that government will continue to provide palliatives, adding that about 600 buses would soon be deployed to ease movement around the city while the government is committed to completing the blue line rail project and kick-starting the red line rail project.[

Lagos State Governor, Babajide Sanwo-Olu on Tuesday said any malaria-like symptom should now be considered and treated as COVID-19 until proven otherwise. The governor, who briefed newsmen at the State House, Ikeja on COVID-19 update in the state said such symptoms should be considered COVID-19 END_OF_DOCUMENT_TOKEN_TO_BE_REPLACED

An investigation has shown that the average cost per kilometer (km) of the newly contracted Kano-Maradi rail line exceeds similar projects under the Programme for Infrastructure Development in Africa (PIDA), as estimated by the African Union (AU) by, at least, 100 per cent. The Federal END_OF_DOCUMENT_TOKEN_TO_BE_REPLACED

Miyetti Allah cries out, says 20 members killed, burnt in Niger The Miyetti Allah Cattle Breeders Association of Nigeria,(MACBAN) has raised alarm over the gruesome killings of their members by members of Vigilante in Mashegu local government area of Niger state. Deputy National President of END_OF_DOCUMENT_TOKEN_TO_BE_REPLACED