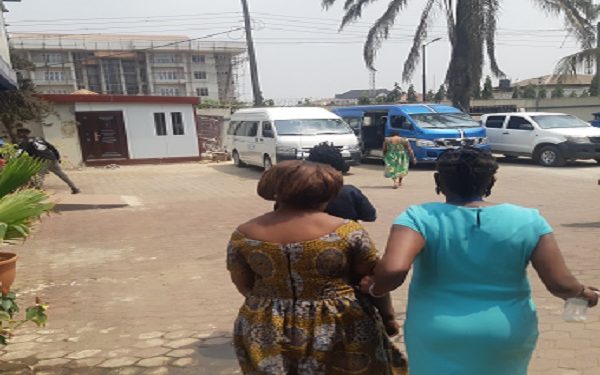 Two sisters Juliet and Chioma (surnames withheld) have been arrested by the National Agency for the Prohibition of Trafficking in Persons (NAPTIP) for allegedly selling their mentally-challenged younger sister’s son for N350,000.

Also arrested by NAPTIP Lagos command were a pastor’s wife, Efe, and one 45-year-old Mrs. Alabi alleged to have bought the month-old-boy from the sisters.

The Nation gathered that the suspects were rounded up on January 30 following a complaint by the siblings’ brother, Chibuzor.

Chibuzor, it was gathered, was worried when he asked to see their sister’s son born on January 8, but was told he had been handed over to someone who would take care for him.

NAPTIP Commander Daniel Atokolo said it was the fifth time the woman identified as Doris had lost her children to the greed of the people around her.

He said, “Many might argue that this is possibly in the best interest of the children, but the agency calls on Nigerians to please explore legal means of adoption as purchase or sale of babies is a crime that is punishable by law.

“The agency as you may be aware adopted a five-pronged strategy to the fight against human trafficking which is Policy, Prevention, Protection, Prosecution and Partnership.”

Answering questions from reporters, Efe said she was moved to intervene after she heard stories of a mentally unstable woman who fed her new baby with kerosene at Kirikiri which killed it.

She said when Alabi approached her and narrated her predicament, she told her she had no idea how adoption was done but that she knew of a family with a mentally challenged sister who was pregnant.

She said: “They told me that she has given birth to five children and because of her condition, she usually left the babies and people would steal them. They said she was pregnant again and they have discussed with their elder brother who said he does not have money for treatment and they needed someone who could take care of her baby. I helped them get somebody and they collected N350,000. They brought the child to my friend here.”

Alabi said she was desperate because her 10-year-old marriage was threatened over her inability to have a child. She said her husband and those around her subjected her to mockery and she was pained over it.

“My marriage was breaking. The pain, the mockery and even the last one I did which was Intrauterine Insemination (IUI), no result. I did not know what else to do and I know I am aging and need someone around me. I now called this woman (pastor’s wife) whom I have known as a friend and told her I am really going through suffering in the hands of my husband and everyone around me. I do not know how to do it and I don’t have idea, I want to see how I can adopt a child that I can train and have as my own.

Chioma said,”Doris is my younger sister from same parents. How is it possible that Juliet and I would sell her baby? She is mentally unstable.

“We agreed to meet the pastor’s wife for help. We explained the situation to her and told her we want someone who can care for the baby since neither of us have the means. We did not sell the child. She agreed to help look for someone in need of a baby boy and that we, including Doris will be able to see the boy whenever we wanted to.

“So, she later brought N350,000 that we should use it to treat Doris and the money was handed to me in her presence. Juliet was not around and so, I kept the money in the hopes that when she returned, we can go to a mental hospital for Doris’ treatment.”

Yusuf Alli, Abuja  THE Economic and Financial Crimes Commission  (EFCC) yesterday quizzed the Speaker of the Ondo State House of Assembly, Mr. Bamidele Oleyelogun, over his involvement in an alleged N2.4million fraud. A source said: “The commission had received a petition accusing the Speaker of being END_OF_DOCUMENT_TOKEN_TO_BE_REPLACED

A 31-year-old woman has confessed on how her boyfriend made to sell her only child for N300,000 to a buyer in Imo State. According to the woman, Titilayo Kudaisi, her boyfriend, Seyi Akinsete whom she met four months had been into the business of stealing END_OF_DOCUMENT_TOKEN_TO_BE_REPLACED

Police say the houseboy received information that his employer had a lot of money at home ByAgency Report The police in Ondo State on Thursday paraded one Emmanuel Akpan, a houseboy, with his accomplice, Goodness Ekpe, for allegedly killing his employer, Febisola Adebayo. Bolaji Salami, commissioner of END_OF_DOCUMENT_TOKEN_TO_BE_REPLACED

Pfizer confirms fake vaccine shots on sale in two countries × Vials of the Pfizer-BioNTech COVID-19 vaccine are pictured at the Sheba Medical Center, Israel. Photo: AFP Fake doses of the Pfizer coronavirus vaccine were being sold in Mexico and Poland for as much as END_OF_DOCUMENT_TOKEN_TO_BE_REPLACED