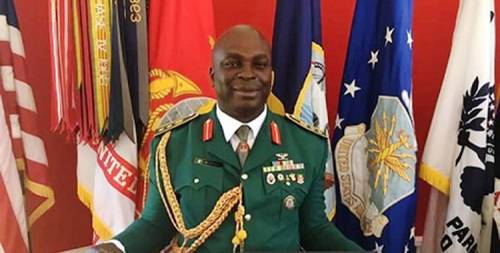 Chizoba Vivian Nengite, the wife of Brig.-Gen. Charles Nengite, yesterday refuted allegations that some lodgements, ranging from $11 million to $15 million, were found in her bank account in the United States (U.S.A).

Mrs Nengite said claims that she was under investigation for money laundering by law enforcement agencies in America were false.

She threatened to seek legal redress against the sponsors or publishers of the “false information”.

There were reports, last December, that the Nigerian Army detained Brig.-Gen. Nengite following the discovery of $16 million in a bank account belonging to his wife’s U.S bank account.

He was said to have been held by the Army’s Special Investigations Bureau (SIB), a department that handles matters on fraud and money laundering.

But Mrs Nengite, in a statement through her lawyer, Taofik Adeleke, described publications linking her to any such money as “false and malicious”.

Adeleke said: “…A false allegation by unknown sources was made against our client insinuating that our client was involved in money laundering activities.

The lawyer said the “false publication” caused Mrs Nengite and her family “a lot of undue embarrassment, thus necessitating the need to refute the wrong information now in the public domain”.

He added: “We wish to state unequivocally on behalf of our client that the information is not true.

“At no time was such an amount of money or any huge sums of money found in our client’s account to warrant the false and malicious publication.”

According to Adeleke, the woman had “never at any time been invited, interrogated or questioned by the authorities in America, as falsely claimed in the said publications”.

He also said: “The false information in the public domain is only an imagination in the mind of mischief makers.

“Our client is a law-abiding citizen, and it is disheartening that the image of our client is being tarnished by mischief makers whose jaundiced publications and statements have had a negative impact on our client’s emotional well-being and family reputation.

Ahmed Musa launched his Neighbourhood Centre Sports Complex on February 1st 2021. Very few people know about the fantastic Sports Complex in Kaduna. Ahmed Musa also has plans to build a school in Jos and this is one of his various philanthropic efforts. At Ahmed END_OF_DOCUMENT_TOKEN_TO_BE_REPLACED

Power drunk politicians sponsoring bandits – Gov. Matawalle Governor Bello Mohammed Matawalle of Zamfara State has vowed to arrest any politician who enters the state with the intention to use thugs to forment trouble. According to him, there is nobody that can claim to be END_OF_DOCUMENT_TOKEN_TO_BE_REPLACED

Why was this white guy in capitol riot never referred to as a “herbalist” but the African guy beside me is constantly referred to as a “herbalist?” #BuhariMustGo #RevolutionNow https://mobile.twitter.com/YeleSowore/status/1366771364267495427 Nigerian activist and RevolutionNow convener Omoyele Sowore has revealed why he was seen in court END_OF_DOCUMENT_TOKEN_TO_BE_REPLACED

BREAKING: Northern traders agree to resume north to south movement as Kogi Gov Intervenes After about six days, the Leadership of Cattle and Foodstuff dealers under the aegis of Amalgamated Union of Foodstuff and Cattle Dealers of Nigeria, on Wednesday, agreed to resume the movement END_OF_DOCUMENT_TOKEN_TO_BE_REPLACED

At least three majors, three captains and six lieutenants were among those declared wanted for fleeing the insurgents last month in Borno. The Nigerian Army has ordered the immediate arrest of officers accused of deserting their posts during the Boko Haram on New Marte and END_OF_DOCUMENT_TOKEN_TO_BE_REPLACED