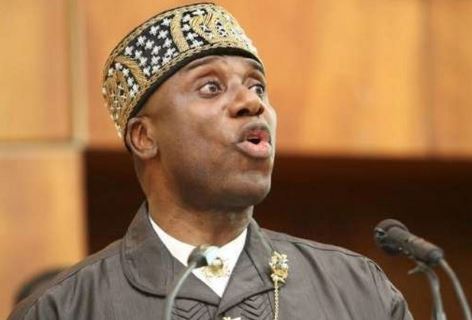 THE Federal Government will link all the nation’s sea ports with an effective rail system, Transportation Minister Rotimi Amaechi has said.

The minister stated this on Monday on a national television programme.

Amaechi said this is the only addendum the President Muhammadu Buhari administration made to the rail transportation 25-year masterplan it inherited from the previous governments.

The minister said while the Lagos–Ibadan standard gauge will terminate at the Lagos Wharf, the Itakpe-Ajaokuta line, which was to terminate at Agbor, has been extended to Warri.

He added that there was an approval of a deep sea port in Warri.

According to him, the Lagos-Calabar coastal rail line being proposed by the administration will link the Warri, Calabar and Port Harcourt ports.

Amaechi also said the Buhari administration was working at linking the Tin Can and the RORO Ports in Apapa by rail.

But the minister said linking the new Lekki Deep Sea port by rail with other parts of the country would happen in the future.

He added that the Buhari administration will begin work on the $5.8 billion (about N2.8 trillion) Ibadan to Kano rail project once the Federal Government gets the loan for it.

The minister noted that if this could be accomplished, the current administration would have recorded a milestone of linking all state capitals by speed train network.

Shedding more light on the Lagos-Ibadan standard gauge, Amaechi said the contractor, contrary to its earlier work schedule, is yet to deliver on the four major stations on the route.

The stations are at Apapa, Ebute-Metta (both Lagos), Abeokuta (Ogun) and Ibadan (Oyo).

The minister explained that of the nine minor stations, only Kajola (Ogun), which was the model, was nearing completion.

Amaechi decried the negative impact of ports congestion to the projections, saying the equipment that arrived on the nation’s waters since December had not berthed due to the congestion.

Felix Onajite Delta State governor, Okowa and SSG, Chiedu Ebie Two top officials of the Delta State government have tested positive to coronavirus (COVID-19). The chief press secretary to the governor of the state, Mr Olisa Ifeajika, who made this known in a statement in Asaba on END_OF_DOCUMENT_TOKEN_TO_BE_REPLACED

JOHN ALECHENU and PETER DAVID Ahead of the governorship primary of the All Progressives Congress in Edo State on Monday (tomorrow) the party has dismissed the order gazetted by the state government that political parties must obtain approval of the governor to hold any political gathering. The END_OF_DOCUMENT_TOKEN_TO_BE_REPLACED

The coasts seems clear on Saturday with the clearance of Governor Godwin Obaseki to seek re-election on the platform of his new party, Peoples Democratic Party (PDP). The Hon. Kingsley Chinda-screening committee gave Obaseki a clean bill of health ahead of the PDP primary election END_OF_DOCUMENT_TOKEN_TO_BE_REPLACED

Davidson Iriekpen, Martins Ifijeh in Lagos and Ernest Chinwo in Port Harcourt There may be no respite in sight for Nigerians as far as Coronavirus is concerned if we take what the authorities are saying. Secretary to the Government of the Federation and Chairman, Presidential END_OF_DOCUMENT_TOKEN_TO_BE_REPLACED

Friday Amobi, Port Harcourt These are not the best of times for medical personnel not only in Nigeria but all over the world especially in countries where the global pandemic of Coronavirus is still raging. In some countries they have continued to live in denials END_OF_DOCUMENT_TOKEN_TO_BE_REPLACED