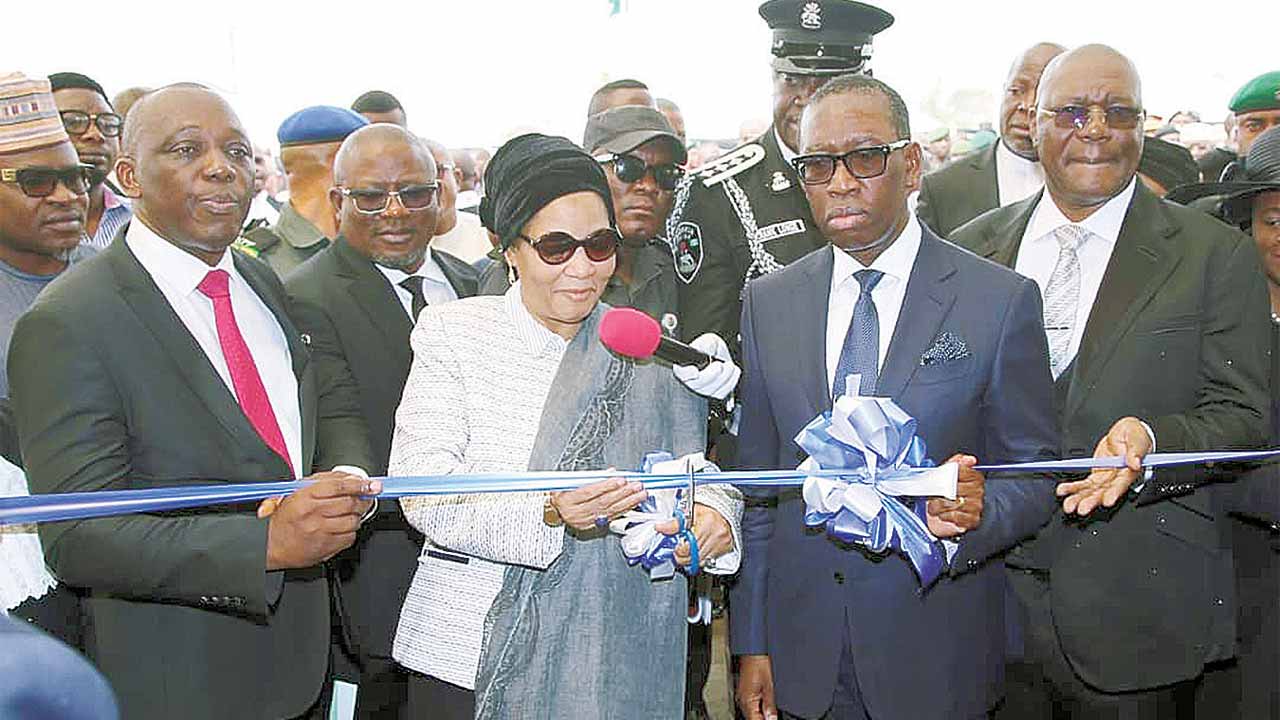 President of the Court of Appeal, Justice Zainab Bulkachiwa, yesterday commissioned the 17th Court of Appeal division in Asaba, Delta State to reduce the drudgery of long distance travels, cost of transportation and delays due to congestion.

The commissioning of the complex was part of her valedictory visits to the various divisions of the court, as a prelude to her retirement on March 6, 2020.

Bulkachuwa, who is the first female President of the court, reaffirmed that the creation of the new division in Delta was to ensure that justice would always be done.

Speaking, Governor Ifeanyi Okowa noted that since 2015, it has been his government’s priority to extend the frontiers of justice administration by bringing it closer to the people for fairness, equity and timely service delivery. While expressing appreciation for the honour done her, Bulkachuwa said, “I am delighted and honoured with this distinguished gathering for the commissioning of a new Court of Appeal Division, Asaba, Delta State.

“The court is primarily an appellate court. It hears appeals from courts and and tribunals such as code of conduct tribunal and election tribunals.“At inception in 1976, the Court of Appeal had the Lagos, Kaduna and Enugu divisions. In 1977, the number was increased to five with the establishment of Benin and Ibadan divisions.

“Subsequently, other divisions were added. The court had 16 divisions as at Sunday, February 2, 2020 and today we are commissioning the 17th division of the court in Asaba.“The expansion is an aspect of judiciary reform agenda to enhance access to justice, speedy disposal of cases and efficient administration of justice.

“The principle is fundamental to the extent that in terms of severe austerity, when government and businesses are meant to close down, some of its liaison offices are reduced in staff strength, the judiciary will still be expanding even at such times.” She continued, “Each of the divisions is always busy, and Benin Division, which covers Delta and Ondo States is one of the busy divisions.

“The clamour and requests for a new division by Delta State government, the Nigerian Bar Association (NBA) that majority of court cases in Benin Division emanates from Delta State, necessitated the need to create a division of the Court of Appeal in Asaba.”

In his address, Okowa listed his administration’s support for judiciary reforms, since 2015, saying, “The opening and commissioning of the court complex is a thing of great joy and satisfaction, of resounding hope and fulfillment for the legal profession and for all Delta people.

Eniola Akinkuotu A Lagos State High Court has barred Folasade Tinubu-Ojo, the daughter of All Progressives Congress leader, Bola Tinubu, from imposing levies on traders at the Computer Village, Lagos. The development comes over a year after Tinubu-Ojo, who is also the Iyaloja-General of Lagos END_OF_DOCUMENT_TOKEN_TO_BE_REPLACED

Adebayo Ayinde Minna   The kidnapped students and staff of Government Science College Kagara have finally regained freedom from the armed bandits in Niger State. A top security source involved in the counter-kidnapping operation in the State told The PUNCH. The PUNCH had reported the END_OF_DOCUMENT_TOKEN_TO_BE_REPLACED

Afeez Hanafi At least six children have been declared missing in Idi Araba, Mushin Local Government Area of Lagos State, as concerns over the safety of kids in the community grow on a daily basis. The missing children are identified as Abdullahi Mohammed, Umairah Umar, END_OF_DOCUMENT_TOKEN_TO_BE_REPLACED

The Central Bank of Nigeria has acknowledged the Vice President, Professor Yemi Osinbajo, SAN, for his counsel in support of the regulation of digital currencies which has sparked some controversies among Nigerians after an order from the apex bank to commercial banks to restrict cryptocurrencies END_OF_DOCUMENT_TOKEN_TO_BE_REPLACED