Despite claims by the military authorities of curtailing Boko Haram insurgents’ activities and their Islamic State in West Africa Province (ISWAP), reports continue to indicate that it’s not yet Uhuru for both the military and the defenseless citizens, reports OKODILI NDIDI.

AFTER a lull, when everyone thought it was over, Boko Haram and the Islamic State of West African Province (ISWAP) bounced back with deadly attacks on border communities, killing and maiming villagers in large numbers.

The terror groups were believed to be phasing out, battered, bruised and decimated both in manpower and equipment. And with sustained onslaught by the military, the insurgents had suffered great casualties with most of their top commanders smoked out of their strongholds and forced to surrender to troops. Their bloody campaigns, it was thought, have been reduced to nothing more than uncoordinated feeble attacks at soft targets with the Defence Headquarters at a point declaring that the terror groups have been pushed into the Tumbus Island and were no longer operating on Nigerian soil.

But suddenly, the terrorists struck again, killing, maiming and burning down communities. In the last few weeks, no fewer than 120 people have been killed with over 3,000 people displaced.

For instance, Gamboru, a border community in Borno State, came under bloody attack when the insurgents blew up a bridge with an Improvised Explosive Device (IED), resulting in the death of no fewer than 30 people. The bridge, situated in a market, was attacked around 5:00 p.m. at the peak of activities in the market. Eyewitnesses said more than 35 people injured were taken to the local hospital.

In another daring move, the insurgents ambushed the theatre Commander of Operation Lafiya Dole (OPLD), Maj.-Gen. Olusegun Adeniyi, in what could have been a major setback on the counter-insurgency war. The Nigerian Army Operations Media Coordinator, Col. Aminu Iliyasu, said the attack took place about two kilometers to Auno in Kaga Local Government Area of Borno State, adding that the Commander was returning from Jakana where he visited troops’ location. He was to have met Governor Babagana Zulum of Borno State earlier at Auno before the ambush.

Iliyasu, nevertheless, described the ambush as “a clear display of misguided desperation to stage a reprisal, following the recent neutralisation of several of their top commanders by troops”.

The troops, however, overpowered the ambush and neutralised the bandits. Two soldiers were reportedly wounded in the attack. Items recovered from the insurgents included 20 rounds of 7.62mm Special ammunition, 2 rounds of 7.62mm NATO ammunition, one pair of camouflage trousers, one Nigeria Police Force fragmental jacket, 2 AK 47 rifle and 3 AK 47 rifle magazines. There were also reports of attempts by the terrorists to capture Madagali Town in Adamawa State before they were repelled by troops, although the Army debunked the report as unfounded.

Across the states, especially in the Northeast, there have been pockets of attacks by gunmen, fueling suspicion that the sect may have infiltrated the villages again. How the bandits, who were said to have been vanquished, were able to stage a comeback has remained a source of concern, especially after the heavy land and aerial bombardments of their hideouts by the military.

Could it be that the groups were not decimated or weakened as claimed, but were only bidding for time to deceive security operatives and villagers to lower their guards before they strike?

A closer look at the modus operandi of the sect now showed a pattern of attacking their targets simultaneously, especially along the border communities to overwhelm counter-measures by troops. 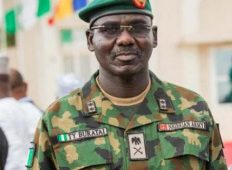 A similar ambush on troops of the 271 Nigerian Air Force (NAF) Detachment, Birnin Gwari at Ungwan Yako, along the Kaduna-Birnin Gwari Road in Kaduna State, left an officer, Aircraftman Mukhtar Ibrahim dead, while several others were seriously injured. The heavily armed bandits, said to be over 70, had engaged the troops in a gun duel before they were overpowered by superior firepower from the officers.

The military has consistently claimed to have responded to the new threat with decisive force that has resulted in heavy loss on the side of the insurgents, both in men and equipment. The military authorities have also laid claim to having clearing operations that have led to busting the dens of the terrorists, neutralising them in large numbers and freeing their captives.

The Air component of the Operation Lafiya Dole said its troops have intensified air bombardment of ISWAP facilities in the forests along the fringes of Lake Chad.

Chief of Army Staff Lieut.-Gen. Tukur Buratai reassured Nigerians that the counter-insurgency operations in the Northeast and other ongoing operations against “our common enemies” across the country are still on course with current indicators revealing tremendous successes across the various theaters of operation.

Iliyasu, in a recent statement, said: “After a careful review of the Nigerian Army operations in the Northeast, it is pertinent to state that, Headquarters Nigerian Army has gladly observed the renewed zeal and determination by troops to take the counter-insurgency operations to its logical conclusion with outcomes favourable to Nigeria and Nigerians as evident in the recent decimation of many Boko Haram/Islamic State West Africa Province criminals, including some of their top commanders.”

Despite claims by the military authorities, Nigerians living or doing business around many towns and villages in the Northeast have continued to come under incessant attacks by the terrorists and other criminal elements, who operate for hours unchallenged in many instances.

The resurgence of Boko Haram members has been described by the Chief of Army Staff (COAS)  as “the kicks of a dying horse gasping for the last breath.”

Besides, the military boss warned foreign countries and agencies against meddling into issues pertaining to national security, especially the fight against Boko Haram and the Islamic State of West African Province (ISWAP).

Lt.-Gen. Buratai’s warning came a day after the European parliament, a legislative branch of the European Union (EU), said there has not been progress in the anti-insurgency fight.

The parliament in its January 16, 2020 resolution said the security situation in Nigeria has deteriorated significantly.

But, Col. Aminu Iliyasu, the Army Operations Media Coordinator, said the COAS has asked those bodies to make utterances that would help restore peace.

A statement signed by Col. Iliyasu said: “The Chief Of Army Staff, Lt.-Gen. Tukur Yusufu Buratai has reassured Nigerians that the counter insurgency operations in the Northeast and indeed, other ongoing operations against our common enemies across the country, are still on course with current indicators revealing tremendous successes across the various theatres of operation.

“After a careful review of the Nigerian Army operations in the Northeast, it is pertinent to state that, Headquarters, Nigerian Army, has gladly observed the renewed zeal and determination by troops to take the counter-insurgency operations to its logical conclusion with outcomes favourable to Nigeria and Nigerians as evident in the recent decimation of many Boko Haram/Islamic State West Africa Province criminals, including some of their top commanders, amidst  several arrests of the insurgents’ logistic suppliers and collaborators, numerous capture of the criminals’ arms and ammunition as well as rescue of many captives from the bondage of the insurgents.

“To this end, all local and foreign interests are advised to exhibit more commitment and restraint on issues of our national security and avoid taking sides. Furthermore, all actions and utterances must be tailored towards supporting the national cause with a view to restoring peace and tranquility to our beloved country.”

Gen. Buratai said troops  sacrifices  would never be in vain.

He warned those who “take delight in the suffering of innocent citizens that the day of reckoning is at their door steps.”

Buratai added: “All well-meaning Nigerians, especially those in the Northeast and friends of Nigeria elsewhere are enjoined to fully support the counter-insurgency operations as well as the fight against all forms of criminality across the nation.”

Many Nigerians are currently trapped in the Caribbean Island of St. Vincent and the Grenadines due to a volcanic eruption. Dr Levi Odoe, the Consul-General of Nigeria on the Island, has appealed for support from the Nigerian government and other public-spirited entities around the world. END_OF_DOCUMENT_TOKEN_TO_BE_REPLACED

International financial expert and Chartered Accountant, Akin Oladeji-Johnbrown has been declared as hero of Covid-19 pandemic by a Canadian City, Mississauga, Ontario. In the letter of award, by the city’s Mayor, Bonnie Crombie, Oladeji-Johnbrown is among the few residents identified to have rendered critical services END_OF_DOCUMENT_TOKEN_TO_BE_REPLACED

Ned Nwoko By Emma Amaize A former member of House of Representatives, Hon Prince Ned Nwoko has expressed fear over escalating insecurity in the country, warning that if uncurbed, it could threaten the existence of the nation with the lives of citizens already endangered. Prince END_OF_DOCUMENT_TOKEN_TO_BE_REPLACED